BAUHAUS -- I have always been curious about Bauhaus-Archiv Berlin beause it features on no fewer than three different parts of our multimedia degree programme. The current archive staff researches, documents and presents the history of the Bauhaus school (1919-1933), the most important school for architecture, design. Anyone involved in new media would enjoy the permanent Bauhaus exhibition. Temporary special exhibitions are dedicated to individual artists, or to topical themes in the fields of art, architecture, and modern design.

BERLIN -- Perhaps the best technology that I have observed in Berlin is the proliferation of shops offering to print from the memory cards you remove from digital cameras. The touchscreen process is fast and inexpensive. I had 103 prints taken from my Fuji S602Z, printed in 9x13cm format, pressed onto CD, and it cost me less than $35. I can recommend Foto Quelle in the middle of Berlin. Their process is less than half the cost of standard 24-hour photo places in Dublin. The prints come on original Fuji paper. The downside is the price point locks you into a two-day turnaround.

IRISH WAN --The national conference of the Irish Wide Area Network will happen on Saturday, April 24, 2004 in The Auditorium, WIT, Waterford and I wonder if the bloggers from the southeast want to arrange a break-out session for a chat on the day.

SHIRKY -- Last year, Clay Shirky taught a class called Social Software in which the students "worked in small groups to design and launch software to support some form of group interaction." Shirky required that whatever project proposed by students had to be used by other students. "This first order benefits of this strategy were simple: the designers came from the same population as the users, and could thus treat their own instincts as valid; beta-testers could be recruited by walking down the hall; and it kept people from grandiose 'boil the ocean' attempts."

BERLIN -- The Deutsche Guggenheim exhibits Miwa Yanagi's series My Grandmothers -- pictures of people who have been made to look older by means of computer editing as well as by make-up, and who give a scenic portrayal of their life’s dream. It is fascinating to read the various statements alongside these photographs. They are passionate pleas, visions of a future world in fifty or sixty years, for Yanagi inquired of young people about their own, utterly personal images of a fulfilled life in old age. Friends, acquaintances or actresses located through the Internet, along with the artist herself, appear in these portraits.

BERLIN -- I am spending the next four days roaming around Berlin, as part of a visual arts practises trip to visit artists, galleries and curators. The hotel sits "in der Mitte Berlins in umittelbarer Nähe von Berliner Dom, Museumsinsel, Scheunenviertel und den Hackeschen Höfen." Like any other mid-city hotel, it has plenty of distractions, once you walk 10 minutes Oranienburger Straße. I'm eager to see how things have changed in the last 11 years, prinicpally with the erection of high-rise apartment blocks.

Agon Alexanderplatz -- where the immersion begins and the Berlin photos start.
x_ref1350 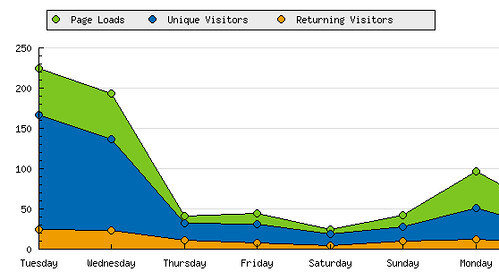 DAVE POLLARD OFFERS up a snazzy graph (not the one on this blog post) and suggests five ways to increase online readership, many of them similar to best practise in writing for the web.

He doesn't mention adding easily-discoverable RSS feeds, perhaps because hits from RSS news feeders don't register as page impressions. From personal experience, many active blogs serve up eight times as many RSS feeds as they do HTML pages. Pollard also doesn't offer the "add sex" tip. When I pulled down the sex links that had spammed my comments, I lost nearly 250 viewers each day.

Dave Pollard -- "How to increase your Readership"

CLONMEL -- Drive along the western part of Clonmel's ring road and you might see a white building housing the multimedia studio of Tipperary Institute. Kitting out this studio would have cost €40,000 more just five years ago. Today, we get professional quality results with equipment costing less than €400. Students learn media literacy in this studio setting.

KILKENNY -- In this medieval city, renowned for its cultural heritage, I overheard a snippet of conversation that bears repeating. "Now who believes Joyce would have a bigger impact on Irish culture if there were a central clearinghouse that all productions of Joyce's work must use?" The intimate coffee chat involved two people active in the Irish arts.

No Smoking in Ireland

UPDATE 29 March 2005 -- One year after the smoking ban was introduced in Ireland, there have been just 20 prosecutions for violations, according to the Office of Tobacco Control. Only a small number of those prosecuted have had to pay the maximum fine of €3000. So far, €400,000 has been spent publicising the smoking ban -- half before it was introduced and half afterwards. However, enforcing the ban has not cost any money. It is policed by environmental health officers who were in place before the ban came in. They are not present on Friday trains running between Dublin and Kilkenny, where I observe British tourists smoking between carriages on a regular basis.

KILKENNY -- I have visited three coffee shops before 1000 on the first morning of Ireland's ban on smoking and noted no drop in trade alongside no ashtrays. Smoking is now banned in all enclosed workplaces in Ireland. On the first day of the smoking ban, Google listed 15 pages with the Irish phrase for no smoking: No Caith Tobac. The law arises from the Public Health (Tobacco) Act, 2002 (Section 479 Regulations 2003. The Office of Tobacco Control said all complaints made to its 1890 333 100 hotline will be acted upon. I want to photograph the first smoking inspector that I see.

Continue reading "No Smoking in Ireland" »