IGNORANT FAITH-BASED policies are killing people in Uganda. The Bush operatives downrange in Uganda applied financial pressure to stop the teaching of the correct use of condoms. From Talk2Action:

Crushing news out of Uganda last week. The Bush administration's $1 billion experiment in using abstinence messages as the basis of HIV prevention has born its first fruit: In a public speech on May 18, Uganda's AIDS Commissioner Kihumuro Apuuli announced that HIV infections have almost doubled in Uganda over the past two years, from 70,000 in 2003 to 130,000 in 2005.

And despite this chilling wake-up call, Bush has empowered Christian right activists to continue to push their abstinence-only agenda at a UN Special Session on HIV/AIDS, to begin next week. According to a State Department email I obtained, the official U.S. delegation is stacked with some of the very people who contributed to the debacle in Uganda.

As John Walkenbach notes, "at least they'll go to heaven when they die." Meanwhile, in Washington, the President sticks resolutely to his failed policy. Nothing new there.

SINCE JUNE IS officially Black Music Month, Tipperary Institute podcasts during June 2006 will feature black musicians from the Podsafe Music Network. This will be very challenging because we have fewer than 10 tracks from black musicians among the 345 podsafe tracks that we use for playlist music. Here's what Dubya had to say about Black Music Month:

NOW, THEREFORE, I, GEORGE W. BUSH, President of the United States of America, by virtue of the authority vested in me by the Constitution and laws of the United States, do hereby proclaim June 2006 as Black Music Month. I encourage all Americans to learn more about the history of black music and to enjoy the great contributions of African-American musicians.

Now let's get back down south and fence up the border to protect real Americans.

I'M BORED. So I'm rolling the air compressor out of the garage, starting it up outside, and then firing off around 12 rounds on the nail gun to terrorise the neighbours. It's more fun than using my stun glove on the garden slugs. I get the urge to do these things whenever the Yank in me longs to observe an American holiday. Happy Memorial Day, you guys! 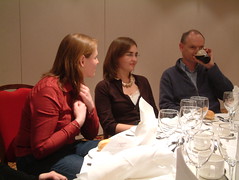 AS AN EDUCATION professional, well-orchestrated events like EdTech 2006 appeal to me. Anyone who attends one of the annual ILTA conferences leaves with their head feeling like a sponge. I did too so to drain out the excess information, I write lists that capture 10 notable things about the event. I took away more than 10 things from the two-day EdTech 2006 but these 10 bubbled onto my notepad quicker than others.

RADAR O'REILLY--the place where I first read the term "Web 2.0"--reminded me that I have plans to attend a technical conference in Cork in early June. Besides being a good way to network, it offers some interesting speakers who have some insight to the read/write web that we develop during multimedia programming modules in Tipperary Institute. Among other things, we use O'Reilly electronic publications that point to new Web 2.0 books, an online Safari e-mail alert service and a pile of handsome books bedecked with woodcut animals on their covers. As much as we rely on the O'Reilly empire to guide students on their way to learning about new developments in our internetworked world, we didn't know that O'Reilly (or the conference hosting company CMP) laid exclusive claim to the adjective "Web 2.0" and in fact, we don't support the claim. We have authored dozens of web pages bearing the term "Web 2.0" along with the 79.4 million web pages bearing the term, most without any reference to a registered trademark affiliated to the term "Web 2.0".

THE BIGGEST seismic event noticeable at EdTech 2006 is the ubiquity of broadband. It's throughout all the rooms in the Clarion, in the air of the conference centre and on phones as 3G. If you would have told participants at EdTech 2004 this would be possible in two years' time--and available in a venue outside of Dublin--they would have laughed in their pints. But it's here, and it works. As well as might be expected. 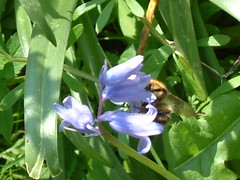 JOHN SMYTH points to a press release from the Heritage Council that cites a list of species facing extinction in Ireland. The list includes some bumblebees. I would never have thought that my grandchildren would not see a bumblebee. Other things threatened include the Pearl Mussel, green-winged Orchid, Barn Owl, Golden Plover, Waxcap (type of toadstool), Marsh Fritillary Butterfly and the Corncrake.

Get New Shoes for Barefoot 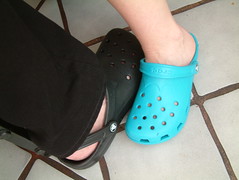 DARREN BAREFOOT sounds like he needs new shoes. They would be Crocs, the v.cool clogs that I discovered on the hot pavements of Flagstaff in mid-May 2006. It's easy to slime the shoes as a fashion statement of the middle-aged tourist, but that stereotype does not work in the desert southwest of the USA where Crocs are more likely seen as an in-crowd uniform accessory. Crocs are simply the best shoe ever. They let my feet breathe. They don't fall off my feet when I run across streets. They have a pebble-like raised insole that helps keep them on your feet while also giving your feet a little massage as you wear them.

YOU HAVE TO SEE HD in person to know what you're missing in your home. If your screen favourites include nature shows or sweeping views of landscapes, you need HD TV to really appreciate the difference high definition makes for television.  Sky now offers eight high definition channels. BBC has one HD offering. I think RTE will be transmitting in HD format by 2016. The documentary channels--National Geographic and Discovery--offer some of the most compelling HD pictures already. Ashley Norris "saw amazing footage in which an airborne camera lingered over African plains, capturing incredible levels of detail of both animals and the landscape. The BBC's HD trailer is also glorious, delivering a tantalising taste of how atmospheric and rich in colour the World Cup transmissions will be." We don't have HD in the house and it will be years before we have enough in the piggy bank to spring for a new screen. We're going for a large hard drive before anything else, something big enough to hold more than three days of high definition footage.

TODAY IS A travel day for me because I have to go from southeast Ireland to northwest Ireland in order to attend EdTech 2006. In order to make the journey while using public transport, it means traveling north to Dublin, then west to Sligo. It's a full day's travel, given the frequency of bus and rail links. But it's worth the journey. I'm presenting "Sound Education in Practise," a topic that extends from Irish podcasting. I also want to persuade some of my Irish Learning Technology colleagues to blog between conferences. Along the way to Sligo, I'm snapping a bunch of photos with my Nokia N70, discovering that it's very easy to inadvertently send all sorts of misfires to Flickr with the phone's one-button snap-and-upload feature.