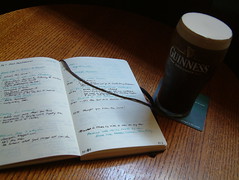 I LET MY PICTURES do the talking to Flickr but not just because they capture an image of a place. When my mobile phone pictures upstream from my mobile phone, metadata embeds itself in the photostream as well. So if I'm in a pub, snap a shot and then file it in my Nokia N70, when it upstreams to my photo collection, it knows it's from a pub and automagically tags itself that way. Funnily enough, only seven of the 2500 images I have on Flickr come from pubs. I don't snap when drinking. Other photographers give their photostreams this kind of easy intelligence too when using ZoneTag, a free mobile phone application created in Yahoo! Labs.

NO SOONER HAD the Microsoft Live team released their video of Photosynth and one wise lad commented that the revolutionary photo-stitching program appeared to offer intriguing angles for nude models. The Preview model of the software hits centre stage at SIGGRAPH 2006 on Wednesday.

WHEN ROBERT SCOBLE visited the annual IT@Cork convention, he worked rooms like a politician. His sincere interest won over college students, jaded bloggers as well as unwitting men and women from all walks of life. His ease of handling crowds and his aplomb with a packed audience shows a mastery of active conversation skills. He's done it again at Blogher. Politicians both sides of the Atlantic Ocean should consider learning something from Scoble's example. Yvonne Divita writes:

10 Items from the Papers

A QUICK READ of the mainstream media in Ireland on Sunday brought 10 questions to my mind. Due to factual inaccuracies in some of its reporting, I do not read the Sunday Independent.

Continue reading "10 Items from the Papers" »

An Apple spokeswoman, Natalie Kerris, said iPods have a failure rate of less than 5 percent, which she said is "fairly low" compared with other consumer electronics. "The vast majority of our customers are extremely happy with their iPods," she said, adding that an iPod is designed to last four years.

THIS WEEK Guardian Unlimited launched a new print edition. It updates every 10 minutes, is available 24 hours a day, seven days a week, is free and can be found around the world. It's G24, the Guardian as a PDF. It's sharp (crisp font rendering by Acrobat does that), includes some pixelated images when Acrobat plays on an over-sized screen, and you get an advertisement pushed onto the bottom of your PDF from Google Adsense.

Another reason to have an open wifi node

IF YOU WANT to win a lawsuit from the RIAA, you're best off opening up your WiFi network to neighbors. It seems like this strategy might actually be working. Earlier this month the inability to prove who actually did the file sharing caused the RIAA to drop a case in Oklahoma and now it looks like the same defense has worked in a California case as well. In both cases, though, as soon as the RIAA realized the person was using this defense, they dropped the case, rather than lose it and set a precedent showing they really don't have the unequivocal evidence they claim they do.

Another reason not to phone in the toilet

EVERY WEEK I hear someone answering a phone call while seated on a toilet. This is not healthy for several reasons. Here is what researchers at the University of Arizona say:

When University of Arizona researchers tested 25 cellphones, 20 percent came up positive for MRSA. "When was the last time you cleaned your cellphone? I'm willing to bet never," says Charles Gerba, Ph.D., the study's lead researcher and coauthor of The Germ Freak's Guide to Outwitting Cold and Flu. "These things are very germy, especially the keypads and mouthpieces." Picture it: Every time you dial a number or send a text message, you're transferring the germs on your hands to your phone and then straight to your mouth.

Continue reading "Another reason not to phone in the toilet" »

DIGGING THROUGH a treasure trove of legacy technology magazines, it's remarkaable to discover that 40 years ago computer storage cost about 20 million times more than it does today. Here's a prediction from the December 1981 edition of Creative Computing: "The cost for 128 kilobytes of memory will fall below $100 in the near future". They got that one right.