LOTUS CONNECTIONS brings IBM's social networking software into the business world. In some ways, the software might be described as MySpace in a suit. Lotus Connections wraps five social networking technologies up into one integrated package—similar to what Microsoft's Office does for traditional desktop productivity software such as Word and Excel. In Business Week magazine, Frank Gens, senior VP of for research at IDC says, "While social computing software is perceived as being at the fringe of most large businesses, it's actually moving to the center fast—because it's about how the next generation of employees communicate, and create and share ideas." Twittering isn't just for lonely kids, you know.

LAST MONTH, several of my Compact Flash cards started misbehaving and I lost dozen of Happy Christmas images, some shot in the room at left. I recovered most of them by following a series of steps that I learned from other photographers who taught me a few things about digital data storage. One practise worth mentioning--don't use gig cards in cameras when you can get away with several 512MB fast-writing cards. A second practise we follow when on the road in Tipperary Institute: download the images every three hours or retire the card and snap in another.

Learning from my Site Map 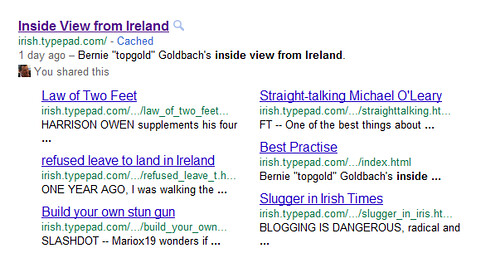 ON MY FIRST DAY with a site map attached to my blog, I can see a pattern of visibility emerging.

Having a site map should improve my blog's Page Rank, something that interests me because I can see my daily visitor count dropping. That decline may be related to other social networks like Facebook, Jaiku and Twitter being more attractive than blogs. Or it might be that people are reading by subscription and not visiting blog pages anymore. So it makes sense to knock together a site map and to show searchers more about your site when they get results on a search engine. The results shown in this screenshot suggest some of the pages on my blog that get the most visits currently.

ALONG WITH 72 other Irish bloggers and interested techies, I'm at BarCamp Southeast taking notes, watching Donncha type and producing some audio snippets. Conn O Muineachain and I presented a short session on podcast production values and I participated in a panel discussion about funding your business. The day's events flow from a well-arranged full schedule. The riverside setting, in one of Ireland's high tech conference-friendly offices, ensures this will be a productive day out. Ken McGuire has more.

AFTER READING about the 2007 Scoblecars, I thought, "I'll bet Robert wishes he had a Post-It Note car."

A QUICK LOOK at our 2006 Irish podcast downloads showed someting we had seen every month. Only one-fifth of our audio files are actually downloaded for use in a player. The rest are played directly on the site, using a computer with Flash or a media player. David Hillis Ingeniux  agrees. "That means the term podcasting is basically interchangeable with on-demand streaming, and that’s not what it was originally intended to be".

Another Reason to Buy Nokia

WHILE CHATTING with Brendan Coleman inside my fav mobile phone shop in Thurles (+353 504 21222), I noticed the Nokia N80i's WiFi phone services. When you get an N80i from Brendan, you get SIPphone installed. This means you can use the N80i in a WiFi hotspot and your calls will route over WiFi instead of across a mobile telephone network. This means your N80i can sidestep exorbitant roaming fees and airtime charges. SIPphone also provides local numbers in more than 30 countries for inbound calls. Try getting that kind of software add-on for your iPhone.

BACK IN THE 80S, I worked with a few analysts in box closets and a handful of specialists on a Pacific island who had figured out ways to hose satellites with different technologies. Normally, a pulse disables an overhead listening post. If you have the power, you could blast a satellite from the ground or above its orbit from a killer bird. Lots of different ways exist to punch things around the earth. The Chinese have fielded an antisatellite capability that destroyed an aging weather satellite last week. Weather satellites orbit higher than US spy satellites. Arms control experts told the New York Times that the Chinese accomplishment "could foreshadow an antisatellite arms race". No news there. The race started two years ago, when the US inadvertently sold the Chinese computing hardware arrays that could be used for advanced telemetry analysis.

THINKING ABOUT getting a Samsung Digital Home Cinema System but wondering how to play the DVDs you have from another region? No worries, mate. There's a Samsung DVD crack below the fold. It works for the Samsung HTQ20, HT-TQ22 and HT-TQ25 players. Getting sorted ensured I can enjoy the DVDs I had collected in the States while sitting in my home in Ireland. Steps follow.