Opposite Sides of the Fence 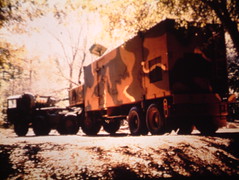 WE HAVE BERKSHIRE on our travel map but not because it's a travel mecca. Berkshire holds some memories for me and represents a place on the timeline of my life where I worked on the opposite side of the fence from John Handelaar. Today, we both blog in Irish space. Back then, we were anonymous faces in the Greenham Common crowd. In fact, I spent a fair few hours trundling around in little boxes like the one on the right.

John opposed the nuclear armaments stored at RAF Greenham Common. I was part of a team that brought 96 special weapons (Air Force terminology) into Greenham and later, I arranged for their removal from England. When I rotated from flying the weapons to controlling the missions, I learned some things that BBC Radio 4 broadcast at 8 PM on Monday 16 July. I learned that UK government scientists had told the Thatcher government that major safety concerns existed with the deployment of intermediate range nuclear weaponry near a densely populated area.

Continue reading "Opposite Sides of the Fence" » 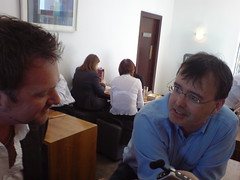 CONN O MUINEACHAIN (at right interviewing Nyle Wolfe) has sparked conversation among social networkers in Ireland concerning the impending fatigue sure to occur if everyone adopts Yet Another Social Network (aka Facebook). Conn and I talked during last week's OpenCoffee in Limerick and then I summarised some of my thoughts in a Greenfields Report [4-minute 96 kbps MP3 file] for Six Pixels of Separation. 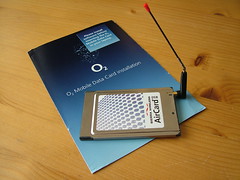 IF YOUR BUSINESS takes you into hotel lobbies, onto Irish Rail, into long queues at airports or into tiresome conferences where "free wifi" means slow connectivity, you need to seriously consider mobile broadband services. In Ireland, Damien Mulley compares the packages available from Vodafone, O2 and 3. We have used O2-Ireland's Gigaplan since February 2007 and have converted hours of unproductive waiting time into gigabytes of downloaded information. The PC card from Sierra Wireless (at right) ensures we have no contention problem inside meeting rooms. It routes around company censorware--essential when your life connects to collaborators through social media. It has saved us more than EUR 200 in extortionate wifi fees while camped inside hotel lobbies between events. Now, the services are getting better. All major mobile services in Ireland now offer USB modems that bump speeds up to at least 3.6Mbps connectivity. I routinely get 1Mbps now with the Sierra card but because I live in a mast-hating small Irish town, I cannot achieve anything faster than GPRS service connections locally. I don't mind the tree-hugging citizens who marshal opposition to wireless telephony through SMS texting and mobile phone calls. I just take my business meetings elsewhere and let the objectors enjoy their little victory against free enterprise. I also use the O2-Ireland card with great effect aboard the mainline Cork-Dublin rail service. The wireless connectivity also pulls down mail and web pages while aboard Bus Eireann in the middle of nowhere. For a complete analysis of the services, read Damien Mulley's report. 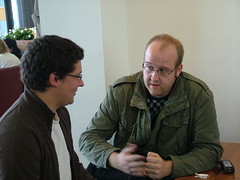 IRISH START-UPS try to make their points succinctly and passionately during OpenCoffee, Barcamps and at Curry 2.0 because more than passing around your business card at trade shows, it matters that you can quickly state your mission. Joe Drumgoole has a different perspective. As participants at Limerick OpenCoffee (two participants at left) have discovered, mission statements and proprietary technology often resonate with other business interests more readily than in the open market with a customer base. It's often easier to establish a business account than it is to attract millions to an innovative product or service. Today's Sunday Tribune covers last week's Curry 2.0 evening and because it mentions Enterprise Ireland, it will surely land inside the Minister for Enterprise's briefing folder for the Monday morning commute. But don't expect anything to appear in that Read File concerning the social software that stirred up interest in Curry 2.0. Maxim Kelly's quarter-page article sits below the break. 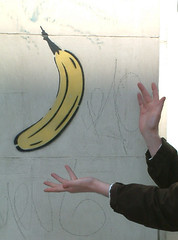 JOLTED BY A faded contact sheet, I'm reviewing the definition of pretentious. I have a reaction to the term "pretentious" because when I was 12, it was a term used by an assistant scoutmaster when he talked about a story of a wise old owl. The story about the owl went as far back as Thomas Carlyle's 1832 article in Fraser's Magaine. "He lived no day of his life without doing and saying more than one pretentious ineptitude."

I grew up in a family where the grandfather sold pretentiousness to clients in need of a memorable wedding bash, a glitzy Bar Mitzvah celebration, a sumptious summer spectacle or a gala reception. Hotels, country clubs and blue-blooded banks nurtured pretentiousness. As a pre-teen, I worked inside these places and learned how to craft a pretentious air for an appreciative client.

During my college days, I discovered artists who lived for the creation of pretentious work. Large pictures became larger pieces because their value would increase through the pretentious over-sized framing. Coming to Ireland, I sought out the opposite and discovered artists who celebrated the miniature. I also met Fintan Friel whose withering comments resound in my head. He chided the pretentious gallerists, curators and collectors who buy and sell graffiti-inspired art, robbing it of its street cred.

Photo from a walkabout of Berlin where street art rules unpretentiously. 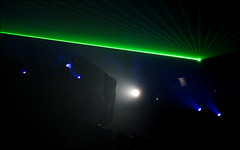 The Festival of Light will celebrate the art, science and technology of light through a range of installations and events in the Science Gallery and around Dublin’s city centre.

Interested in proposing an installation, event or workshop? Then download the Expression of Interest form. Or pass along this information to a friend. 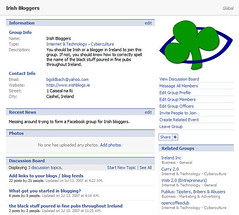 MOST PEOPLE I know do not have the patience for Yet Another Social Network. Conn O Muineachain talked about social network fatigue yesterday during Limerick OpenCoffee. Krishna De wonders which is best if the choice is Twitter or Jaiku. (Jaiku wins in my world.) Bryan Person and Heidi Miller echo what nearly every long-time blogger thinks when they talk about the incessant flow of social network applications. And it is the presence of those applications (i.e., Facebook's applications) that make the Facebook platform the place to be. If you want VCs to sniff your portfolio, make a popular FB app. Scoble says as much when he calls it "the grand daddy" of social networking. I think it is worthy of that commentary because the applications are like the peanut butter that holds together the jam sandwich. 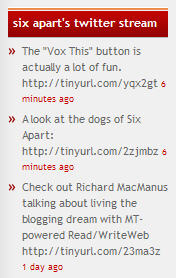 BECAUSE JAIKU aggregates selective feeds for me, I'm passing on Six Apart's offer to include the Twitter widget as part of the sidebar of my blog. I like Jaiku better as a business version of Twitter. I have to listen to Twitter's noise because too many people in my social network tweat their way around work. Both of these electronic social networks bring me back to a page in my Moleskine written at Reboot9 about the Dunbar numbers. That theorem postulates that you cannot effectively maintain meaningful friendships with more than 150 people. I don't argue that. I point out that a friend on Twitter is not a back fence friend that you cordially invite over the fence for a pint or a rack of BBQ ribs. I read my Twitter friends as part of a river of news, liberally using the J-key with Google Reader to zip through the meandering thoughts. I use Jaiku as a microblog since it's more controllable. Specifically, I trust Jaiku's telephone interface but I will not let Twitter near my SMS inbox.

SEVERAL SMALL companies will meet for OpenCoffee Limerick (Limerick Clarion today from 1100-1300) and as the regulars will explain, the coffee often flows as freely as the discussions. James Corbett, Shane McAlister and Paul Sweeney want to encircle some discussion around a group project that has already intrigued an angel investor. Simply put: Facebook applications are getting funding from the VC community and the Limerick developers have an idea that merits review.

How to Do Everything with Podcasting

OUR COLLEGE library has 10 copies of the most helpful how-to book on podcasting ready for the next academic term. The book (at left) comes from two years of business practise as heard from the microphones of Shel Holtz and Neville Hobson. We have integrated the book into several different modules on the creative multimedia degree at Tipperary Institute. Most of the chapters complement the supplemental reading material in one of the three modules I teach. I hope that other instructors can integrate the production processes as part of the radio and video skills taught in the third year of the curriculum. Here are the chapters we hope can be covered during the third year module:

Continue reading "How to Do Everything with Podcasting" »