Inside View: Nokia GoPlay in London 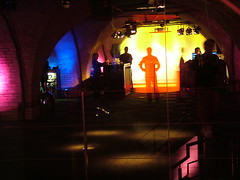 Nokia would not let anyone fondle their new phones until its top management team treated the audience to free coffees, an everlasting spread of food, several speeches and some video clips destined for mainstream advertising. Before the well-choreographed main event, some cheeky journos swapped their neck bands with the Nokia-coloured ones and got to sit in the Nokia Mini that was zipped behind large black curtains under the press deck. They were able to comment on the sleek badass-black Nokia N95 that appears to have the requisite memory (8 GB) and battery (1200 mAh) to squelch earlier complaints about that particular model. This phone can be purchased unlocked (or the network persuaded to unlock it if you have a long-term relationship with a network channel partner). It's one of the most successful in Nokia history, not because of its sales tallies but because it just keeps on generating revenue after it logs onto the local network. Nokia thanks a well-tuned map services programme for that after effect.

As much as I enjoyed looking at new phones, I would have enjoyed seeing clever software working fast on the phones as well. That's normally a separate conference series but in light of how Nokia can see the iPhone at the gates, it would have been helpful for journalists who have never seen clever Series 60 third edition software to watch a showreel that promoted the use of Nokia's firmware to run clever technology. Instead, people could see the phone running music, displaying maps, and connecting to all sorts of entertainment appliances. That's helpful but not worthy of stopping the presses with a bell-ringer's discovery.

I also wondered why a Bluetooth server wasn't offering the Nokia advertising showreel clips to people in the audience. I detected more than three screens of discoverable Bluetooth devices turned on in the audience. I wish I could have taken several of the video clips onto my phone for viewing and sharing later.

One of the main announcements at Nokia GoPlay concerned Ovi, Nokia's social media ecosystem. Ovi means door in Finnish. Ovi means a lot of different things to the presentation team located in the basement. To the music guys, Ovi brings a network effect to a community of music lovers because people can tag, manage, share, sync and enjoy tracks. Ovi brings a "full music experience" to people on their fourth screen in a personal and private way. You will need a Series 60 3rd edition phone to avail of Ovi, something that won't be on the low-cost phones in the emerging markets in Asia and Africa.

Nokia showed its music store but it's not open for business yet. You can purchase an album over the air directly onto your phone by using your network or Wifi, or onto your desktop through your web connection for EUR 10. It costs one euro for a track. You can play that music on your laptop/desktop as well as on your phone. However, these tracks come wrapped with digital rights management (DRM) software which means they won't play for someone else when you transfer them to another device. However, anyone who has lived with the DRM virus on rich media knows how to work around this irritation. Many Irish third level creative multimedia graduates learn this technique as part of their preparation for the knowledge economy. If you put your own music on your phone by using Nokia software, it's not corrupted by DRM. That means you can send your tracks to friends from your phone to their devices by using Bluetooth or by dragging and dropping it off memory cards. You cannot do these things with an iPhone, but Nokia avoided mentioning Apple or the iPhone in its three main presentations.

Nokia thinks music needs to be a mobile experience so anyone smart enough to buy a Nokia phone for its excellent music playback capability should enhance their status among friends. Some of these phones have the space for more than 4000 tracks.

When compared to the Rapture of Steve, Nokia's stage presence falls flat. On the internet at the launch of GoPlay, people were talking about the iPhone Unlock Hack, not waiting with bated breath for Nokia's new announcements. On Jaiku, @conoro expressed surprise as underwhelming web videos of the main GoPlay show. I sat two rows back and searched hard for the "evangelist" gene in the Nokia DNA touted on screen. Someone like Jyri Engestrom--who I hope is consulting the Nokia Head Shed--needs to show the buzz, the connections and the viral social effect of threaded location-aware text conversations. I'm captivated by it but Jaiku did not fold into the parade of logos running at the top of the Nokia main stage.

Nokia envisages a social networking ecosystem that it calls "The Fourth Screen" and in practical terms, that means a high-gloss screen about 2.2" in size on its mid-range music phones. Screens get bigger on several more expensive phones, including the N95 and E-series.

Some of Nokia's 900m established customers may want to purchase a new phone this Christmas and Nokia believes that many of them, accustomed to a simple and intuitive interactive experience with their current Nokia phones, will discover compelling feature sets on Nokia phones in the shops as early as next week in some markets. Fact: if you intend on marking up your content and sharing your stuff through a tag cloud, you need a phone with generous internal memory. I think that means you need a phone with at least 4GB of internal memory or you're going to be disappointed with the Nokia Music Store experience. The Nokia N-series offers a connection to a community. Its bastard cousin, the iPhone, offers a fondling experience.

If you enjoy using your phone when listening to podcasts, Nokia's podcatcher is available for immediate download onto Series 60 3.x edition devices. The newest Nokia podcatcher is optimised with WLAN and the N-series music player.

Many of those present in Old Billingsgate on media junkets from cities across Europe were nonplussed by the Phone-omenom (Jonathan Brazil's nomenclature) and some of those journos owned Nokia phones. Some observors of the back channel text and webcast streams thought the event failed to achieve enough bounce to continue into the following week when Apple is set for another special announcement. I came away from Nokia GoPlay with as many questions as when I entered but with the satisfaction of being informed and entertained. Now if my phone did those things well, I would be a perfect example of a happy fourth screen customer.