FOR THE FIRST TIME in my teaching career, all my incoming third level college students use the same method to find information. They google for what they need. This little piece of anecdotal evidence sums up Google today: it not only dominates the internet, it guides people everywhere. As a verb, it has become more ubiquitous than a dictionary in the family home. This omnipresent power brings to light a compelling requirement--I believe college educators should teach students the double-edged sword Google has become. You can peer down from the heavens through Google's satellite imagery. You can type in my nine digit zip code from the States and find the nearest pizza delivery services, escort agencies and then use a local service to get a street-level view of some of the premises. While I find these capabilities very useful, the easy findability available through Google evokes ambivalent feelings. 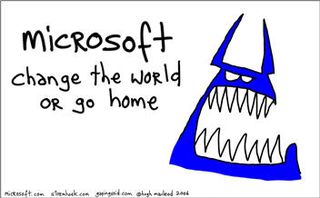 MICROSOFT HAS CREATED a wine label to remind its workers that it has a sense of humour, Stacy-Marie Ishmael reported in the Financial Times. She wrote about "a select group gathering in a bar in London's Soho to quaff a crisp, South African white wine bottled in their honour." The label extends from a series of business cards drawn by Hugh McLeod and has caught the imagination of bloggers and microbloggers worldwide. Unlike some knock-off varietals, the Stormhoek wine used for the Blue Monster label is actually quite nice and a top request at meet-ups of Irish bloggers.

AS A TAXPAYER and long-term resident of Ireland, I have heard and seen things that detract from the harmony that should exist here. More than one out of every 10 people living in Ireland today come from countries outside of Ireland. Within a week, we will have an Irish-born daughter with a German surname. Walking 450m to my nearest corner shop, it's unusual not to hear Polish, Romanian, or French being spoken on the street. That's a big change from Christmas 1994, when I first heard Irish being spoken on a street corner. And it's a big change for many living in Ireland too. In another part of the internet, I've disclosed some things about prejudices I have seen and heard from those employed by the State. I haven't complained about these incidents, even though they would have been investigated by higher authorities. So now I am going to become more active about what I see and hear from people who think they're just "taking the piss" by "slagging off" the "chancers" they encounter on the other side of the desk. This kind of attitude is disrespectful at best and downright harmful at worst. When a civil servant or when someone in uniform lacks common courtesy, ignorant louts might misinterpret the behaviour as a nod and a wink. This kind of behaviour helped set the stage for the populist support enjoyed by Hitler in the 1930s. And while there's a world of difference between the two political states, the human condition is much the same. If you treat people like low life, some people will take that treatment as a license to hurt. And that is not going to build the multicultural Ireland that I hope to make my home.

You Never Have Just One Battery Farm

LOOKING WEST FROM my home on a windswept and rainy night, I can feel the force of the wind pelt at the side of my house. Looking east from my home on a normal day, I can see the branches of nearby trees sway in the breeze. For at least 85% of the time, a wind greater than four miles per hour blows past, up or into the eaves of my house. I want to harness some of that wind power and use it directly to power lights in the house. For that, I am looking at battery technology. Friends at work tell me that I will probably burn through my first rack of storage cells so they advise me to set aside enough funds to purchase a second complement of batteries within a year of turning on the wind power turbines. And because I will need a bank of high technology batteries, the installation won't be cheap.

Continue reading "You Never Have Just One Battery Farm" »

ON MY WAY to the hospital for an unscheduled visit (provisions at left), some headlines grab my eye. And inside nearly every Sunday paper on sale in Ireland, the lines blur between reportage and honest coverage of a little girl gone missing in Portugal. I'm not covering that item, even though most of the Sunday papers in Ireland include reference to the missing child Madeline McCann on their front pages.

I WISH MY PARENTS had shot photos of my arrival in the hospital, along with the attending staff, the fixtures in the maternity ward, and the family car on the way home. I'm thinking about these things now as the photostream of Milan Scoble courses through the internet. I'll have the same opportunity to snap away in the maternity ward but I know many of my shots won't be shared. And since I know that many of the shots that I save will go no farther than my storage media so I'm taking a page from John Walkenbach and listening to people who have more than 5000 photos as they talk about what they do with all those images.

Turning Back the Clock on the Knowledge Economy

THE IRISH IMMIGRATION SERVICE, in an act which many believe is an arm of "a bureaucracy gone mad," has refused leave to land to an American university educator and Google scholar who had intended to earn a PhD as an international student on his international fees-paid enrollment-approved entry to University College Cork in Ireland. Keola Donaghy, a knowledge worker who some readers may recognise as the Hawaiian who hoped to attend Podcamp Ireland, where he was invited by third level educators to provide an international dimension to the creative event in Kilkenny, was the subject of a 13-minute segment [9.1 MB 96 kbps MP3 file] at KCLR 96FM today. At the same time of the interview, Ireland's Minister for Education Mary Hanafin was playing drums at the official opening of the Cork School of Music. The issue around Donaghy's case, though nuanced with all the fog surrounding the special status enjoyed by immigration officers around the world, distills to one simple  nugget in my eyes: the ceding of cultural, education, enterprise development and humanitarian policies to the best judgment of the personnel manning the passport control desk. In many cases that I have personally observed in travels that have landed me in airports on six continents, things can get messy, distorted and totally obfuscated by the behavior of well-meaning personnel manning the checkpoints. As the 13-minute radio clip suggests, we need joined-up thinking in matter of Irish immigration if Ireland intends to advance its knowledge economy. It is imperative for the Secretary Generals from Education, Justice and Arts to efficiently tackle the disarray that exists in the area of international research conducted in the Republic of Ireland. The spoiler role of the Department of Justice should be examined carefully by the Oireachtas Joint Committee on Education and Science as soon as it has been reconstituted. As David McWilliams told the Late Late Show tonight, many Argentinians of Irish descent would fail to get permission to remain in Ireland. Yet those same Irish-Argentinians are part of a gene pool that Ireland has culled to develop its football and rugby teams. As an Irish taxpayer, I think it is time to revisit the phrase "Land of One Hundred Thousand Welcomes" because it might no longer apply to 21st century Ireland.

The audio clip attached to this post was recorded at my feet in my car and the audio background reflects the ambient environment.

IF YOU PLAN to carry your favourite video clips along with you, then you should look at what FireAnt can do. The FireAnt software folds into Odeo and will be part of Odeo's next generation audio, video, mobile device support, and media search technology. Odeo plans to launch a public beta in December 2007. Originally created for the emerging videoblogging community, the FireAnt desktop media player supports all popular media formats including Quicktime, Windows Media, Flash, Real, MPEG-4, DivX, and MP3. It also enables the synchronization of downloaded media to portable devices – including Apple’s iPod, Sony PSP, Microsoft Zune, Creative Zen, Archos and mobile phones. I like the FireAnt desktop video experience, not because of its limited range of Irish content, but because it connects easily to my portable media devices.

AT TIPPERARY INSTITUTE, the third level Media Studies module explores the evolution of media as well as the production skills of creative multimedia students who get feedback on their works in progress as the course unfolds during the academic year. Under the approved syllabus, media studies students must accomplish the following tasks. The Media Studies module builds core skills while coalescing creative collaboration. 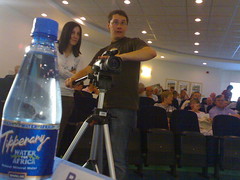 WITHOUT MUCH FANFARE, the webworks at Tipperary Institute revised much of the way information flows out to the desktops of people when they boot onto the intranet. Some clever technology is serving just-in-time data, refreshed by tools tried and tested by Irish technologists. For people like James Corbett, who cannot see the results since they unfold on a local area network, some additional explanation is required about how we hope to tell the Irish tech story by adopting some of its best parts into a corporate intranet unfamiliar with the newest forms of social media. The Tipperary initiative blends news alerts, blog posts, and event information in one view without any scrolling required to see details.