MY BLOG, my Dopplr journal and my Flickr photostream have become elements of my lifestream, so looking back at the year is easiest when thumbing through the timelines on those services. I had a really good 2007, even though I've lost some friends.

ON A DAY RENOWNED for its thinnest Sunday papers, a few news items jumped out in front of my technoculture radar. I would normally go for 10 items but I double-job as a morning shift baby care worker so I don't think Mia will indulge my normal two-hour poring over papers on a Sunday. Besides, I am typing this on a phone with marginal battery reserves.

WE DID NOT FLY to warmer climes for the Christmas holiday season so we missed the excitement near Palm Beach when "six members of a family were arrested at The Mall at Wellington Green in an incident that began benignly enough over a pair of droopy jeans but ended like a chaotic scene out of the Cops TV show where the cops are the fashion police. According to the Palm Beach Post, "an estimated 20 deputies, two canine units and a police helicopter swarmed the area surrounding the mall's food court, shutting down roads, all to arrest a 52-year-old man, his 50-year-old wife and four other relatives, ages 16 to 20, Thursday evening.

Sheriff Jay Hart said, "The mall doesn't put up with that tomfoolery bullcrap. His pants were down below his butt. No one goes to the mall and wants to see the crack of someone's butt."

OVER THE COURSE of my six  years of blogging, I've written about technology I have owned and used. Some of those written blog items generate a standing count of visitors every day. More than 300 different people arrive here every day, just to find specific tech information I have shared since March 2004 on this blog and another 25 people a day visit two other blogs in search of tips written in early 2002. I'm starting to think that I should use Typepad's "pages" feature to set up special show-me-do sections for each of the top eight technical topics below that attract at least one visitor an hour to Inside View. 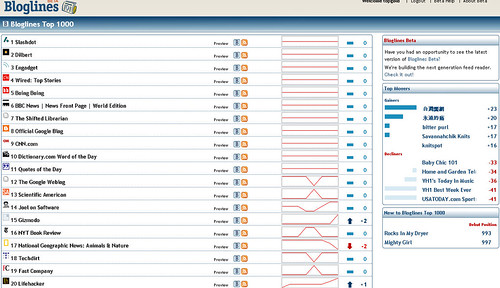 WHEN I STARTED carrying a mobile phone with a wifi antenna inside, I learned how to fill frozen minutes with productive tasks. So I could whip out the phone and toggle into my newsfeeds or read the headers from my e-mail. Many times, these tasks happened without paying O2-Ireland, my mobile phone operator. In 2006, my preferred readers varied, depending on the phone I was using. My SonyEricsson phones can run FreeNews and I like knowing that I could carry cached newsfeeds into connectivity black spots. So when I went flying, my newsfeeds came with me in my pocket. My Nokia 9500 ran Bloglines as its reader until I fell into the Google Reader swamp like the hordes before me. Today, I fired up the third version of Mobile Bloglines (that's the logo at left) and viewing the results made me feel like a time traveler. It had diligently archived my unread items from 2006, holding them for my review. What a treat. But there was more to see.

As rated 4 out of 5 stars on LouderVoice: "Bluetooth, hands-free walk-around earbuds that play around corners and through floors." These sweet little earbuds work right out of the box and if you have a mobile phone or entertainment device that can stream audio, you have a new way of enjoying music or podcasts while walking, working or driving. Newer phones can stream multimedia content--check with your mobile phone reseller for details.

Ready for the Taking 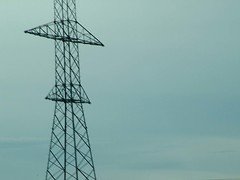 GROWTH IN IRELAND means stringing more power lines and wherever there are trestles without cables, you can bet there's copper somewhere nearby. You can normally find giant bales of cable containing thick copper cores. Some of these tightly-wound cable reels have appeared in the back of Transit vans traveling in front of my home in County Tipperary. I saw an unmarked garda car stop one driver to inspect the contents. Used copper has excellent resale value. The copper market helps the booming Chinese and Indian construction industries, pushing the price for the commodity from €820 a tonne four years ago to more than €5000 a tonne today. In Ireland, you can often collect a tonne of copper wherever three or more power line trestles stand unwired, like those in the photo at left. 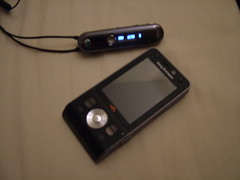 WITHOUT A MANUAL, we figured out how to pop off the back cover of the newest gadget in my wife's purse (see the phone at left) and then to do fun things. The newbie, a SonyEricsson W910i, replaces the first generation Walkman phone that we bought more than two years ago. That first gen Walkman phone is one of the fastest-selling mobile phones in County Tipperary. The W910i is much slimmer than its predecessor, is techno black (easy to misplace under papers) and includes an accelerometer. The last bit means you can flick through music by tilting the phone right to go to the next track or tilt left to go to the previous track. 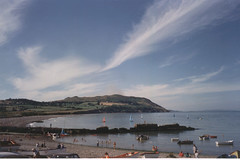 I NEVER EXPECTED to spend more than one Christmas in Ireland and my first December on Irish soil feels all the more remarkable because I overstayed the winter of 1994. Arriving with just a boot full of personal effects, I left a garage of stuff behind in Germany--expensive electronics kit--that I never recovered. Instead, I found myself in a two-story flat in Greystones, County Wicklow, Ireland. The adventure began a week before Christmas with my discovery of roundabouts while driving a left-handed grey market BMW. The car was a screamer beemer, cobbled together from wrecks during a 10-month training course by three lads on Germany's equivalent of a FAS course. When I pulled the car into an Irish dealership for repairs, the service staff refused to work on it because much of the electrics belonged to a 5-series car, the transmission was from an M-series and the engine was not the 1.9 litre displacement as stated on the registration. In fact, most of the car was recovered from the high-speed wreckage of a Polizei smash on the German autobahn. It had a special access decal on its front bumper that let me drive through the front gates of American installations all across Germany. When on a divided highway, the car wanted to catch people and it drank petrol while demanding loads of clutch pressure. Once I parked on crushed gravel outside my flat, I only used the car on weekends. And I didn't use the BMW during my first Christmas in Ireland, December 1994. 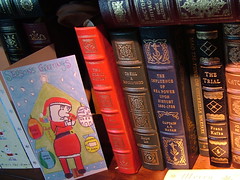 LOOKING BACK AT my usage trends with Google Reader, I see that my reading rate has actually decreased year-to-year. Last year, I had "read 2,998 items, starred 30 and shared none." Today, Google tells me  that from my  236 subscriptions, I have "read 2,624 items, starred 0 items, shared 37 items, and emailed 0 items." Most of my slowdown in reading is directly related to the increase in rich media appearing as part of my news subscriptions. Some of these audio files run longer than an hour. If I use Google Reader to play them, I have to keep the focus on the item and not flick to another subscription to read what is happening there. Unlike most of my friends, I don't mind if I have a pile of unread links. I have six shelves of unread books at this point too, including some stacked around the Christmas greetings at left.