IT FEELS LIKE Christmas in Ireland, now that we're only a few days away from the big event. Most of my world is clearly realigned with Ireland, based on the headlines I will remember from mainstream media this weekend. The jabbering in the Sunday newspapers is mostly soft news, including continuing speculation about how the current leader of the Irish government managed his money without resorting to a current account, a checking account or an electronic payment of his wages. Why didn't he have a bank account? [0]

ONLINE PRIVACY and the protection of personal data has been a big issue for Digital Rights Ireland but it's often difficult to get anyone interested in these things unless they become mainstream. Google has put a spotlight on both issues by the way the search giant seems to relegate privacy to the corporate imperative of gathering as much shareable and searchable content as possible. I started sharing items through Google Reader last week because I wanted to compare that method of knowledge networking to links shared through del.icio.us and something unexpected happened. Anyone who I had ever contacted through Google Talk got adivsed about my shared items. This could create problems if you were annotating sensitive items as "shared" for a close-knit network.

SOMETIMES IT HELPS to begin training early, especially when learning facial commands. This kid has a promising future ahead after learning how to flash the evil eye.

Found at Presurfer, a fun place for daily diversions.

IN A CASE that interests bloggers following Keola Donaghy, Gardaí have withdrawn a threat to deport Erin Britton, an American student who was recently told she would be sent home unless she removed her son from a Galway national school. As reported in The Irish Times today, this marks "an apparent retreat by the Department of Justice, which had recently instructed the Garda National Immigration Bureau not to renew the visas of students whose children were enrolled in State schools." As documented in James Britton's blog, a garda informed Ms Britton that her son could be deported for attending national school. On Tuesday, her request for a visa renewal was granted.

No Bus to Zanaflex 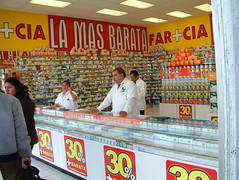 CHANGES IN TRAVEL schedules mean we won't head west for the Christmas break, which also means we won't be taking the drug bus south for Zanaflex. Like many Americans, we have sauntered south of the border for inexpensive pharmaceutical products (see photo). We have returned with sling sacks full of Zanaflex, a short-acting drug that works by blocking nerve impulses that are sent to your brain. Zanaflex reduces pain sensations for a cousin suffering from MS. Zanaflex helps relieve her symptoms, but does not reverse the disease. She endures a lot of eye pain, which seems to affect her balance while walking. I remember her diagnosis more than 10 years ago, following a period of painful muscle spasms that meant she could no longer help out on the family farm. It might be another six months before we make our Zanaflex run but we'll ring around this Christmas to see how everyone is doing.

CHARLIE BROOKER HAS a great idea for Christmas guests--guess the song. Some songs have surprisingly murky lyrics. Guess the mainstream songs from these lyrical summaries.

1. A man lurks outside a woman's house all night, stabs her to death at sunrise, then sings to her corpse until police arrive.

2. A man asks his dancing partner to move back because she has given him an obvious erection.

3. An insane individual decides to monitor the object of his affection's movements 24 hours a day.

5. Riding in an underground train carriage, high on an unspecified substance, a man spots an attractive woman sitting with her boyfriend and immediately becomes convinced that divine forces want him to possess her.

6. Within seconds of meeting a woman in a nightclub, a man describes his intention to insert his manhood into her until she perspires, penetrating deeper each time she makes a sound.

7. A girl commands a boy to put on a condom so they can have sex for the first time.

8. A man clearly and explicitly threatens to murder his girlfriend if he so much as spots her with another man.

9. As he leaves for work, a grown man implores a three-year-old girl not to smooch anyone else while he's away.

10. In a cathartic explosion of rage, a man slaughters three local hoodlums who gang-raped his girlfriend.

PRESSED FOR THE perfect gift? You might be pleased with the Lady Taser, now in such enticing colors as "metallic pink" and "electric blue." These don't come in bulky sizes. They look more like something you'd shave your legs with, and at five and a half inches in length, they're small enough to slip into a purse. You can get a Lady Taser for less than EUR 300. They come bundled in the C2 Personal Protection System may be the ticket from Taser International, the company that owns the Taser brand name and is the biggest producer of the "electronic-control weapons." In ads on its Web site, the company features a C2-loving Santa, as well as a self-assured businesswoman on a Manhattan street and the tag line "I will control my own destiny."

Resolutions from the Sunday News

EVERY YEAR in Ireland, the run-up to the Christmas holiday season is reflected in the page count of the Sunday broadsheets. The number of pages normally decrease and the papers start to boost their cover price by five cents right around the start of the new year. I despise Sunday talk shows around this time because they are increasingly vacuous, reflecting the lack of substance in most parts of the mainstream media. That downturn merely reflects the readership has started its exit from the country for the end of December. Just look at the parking situation at Dublin Airport--you cannot get multi-story car parking in the blocks nearest the airport. Traffic wardens permit cars to perch on kerbs and to cozy up alongside each other on double yellow lines at this time of year, leading many visitors to believe the yellow stripes mark the places for overflow parking. So when I flick through the Sunday papers in late December, I do it to find things I really should consider if I want to live a more productive life next year. Here are some of my considerations.

FOR THE GUY who appears to have everything, may we suggest the Sno-Baller for Christmas? The Sno-Baller turns out huge numbers of snowballs in seconds, so gloves stay drier and hands warmer, and you can fire away without running out. Speaking from experience (four younger brothers and occasional dustings of two feet of snow in December), you need this tool in your arsenal when engaged in wintertime family activities. This clever piece of technology costs less than €5 and around triple that cost if shipping the Sno-Baller to Ireland. During my fortnightly trips to Goose Bay, Labrador, I froze my fingers when scraping snow for the ice hotel that we constructed every winter. I would have loved carrying along a Sno-Baller for those building challenges. Now you can. Act soon. Operators are standing by:  1-800-494-7544 and you could get your Sno-Baller before Christmas by calling today.

Disclosure: I love snowball fights and think the sno-baller could be used for ice cream fights as well. 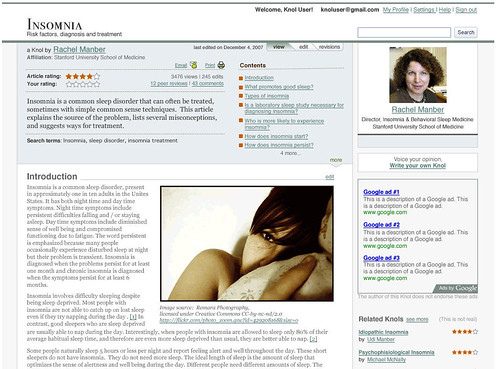 A FEW DAYS AGO, Google invited a group of people to try a new, free tool called "KNOL", which stands for a unit of knowledge. Google wants to entice knowledgeable subject matter experts to write an authoritative article about their specialty. And get paid for their work. This is a new example of agile knowledge sharing, available to view or use by invitation only. Jason Calacanis is trying out this idea with Mahalo. If either work out, authors will get pre-eminent standing over web content. Udi Manber, VP Engineering at Google, believes "knowing who wrote what will significantly help users make better use of web content. At the heart, a knol is just a web page." And it is an SEO's wet dream, which is one reason knols will fail.