TRYING TO BE GREEN, like in the Big Green Apple, the logo for New York City's GreeNYC campaign is too close to the trademark sherrif inside Apple Inc. The blurring of distinction between the Apple Mark and the GreeNYC mark forms part of a legal challenge to the trademark application for an apple logo created by NYC & Company. Court papers filed by Apple claim the New York logo "is likely to cause confusion, mistake or deception in the minds of consumers". I could see that happening to me. Like I might toss my daughter's iPhone into a GreeNYC rubbish bin if I wasn't careful, so I'm glad Apple Inc. is looking after me. 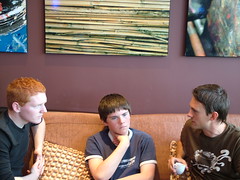 PATRICK AND JOHN COLLISON (the youngest guys at left) took their story onto the couch with RTE Late Late host Pat Kenny tonight and shared some ideas with a grateful audience, many who watched and texted away on Twitter and Jaiku during the 15-minute interview [11 MB 96 kbps MP3 file]. The Collison brothers have achieved millionaire status, an unusual achievement for any teenager, especially one who hasn't finished high school. We listened to their success story during a Limerick OpenCoffee session several months ago but no matter how many times I hear what they've done, I wish that someone with government vision would simply listen to the support mechanisms they found most helpful, then set out to establish a new framework that served entrepreneurs who want to live and work as part of Ireland Inc. We will follow this line of thought on Thursday in the Absolute Hotel during the April OpenCoffee meet-up in Limerick. It's free and will have a Qik stream for part of the session.

Photo by TouristR. Audio from RTE Late Late segment hosted by Pat Kenny and recorded as a Qik stream. The audio segment above will be snapped into Inside View 71 on Wednesday.
Bonus Links: Photos from OpenCoffee and "Inside the eBay ecosystem". 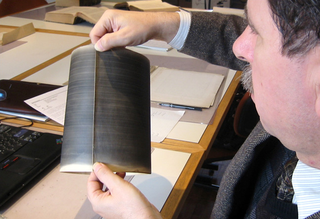 I USED TO TEACH a Mass Communications module in our creative multimedia curriculum that credited Thomas Alva Edison with making the spoken words "Mary had a little lamb" into the first recording. In several of our textbooks, Thomas Edison holds the title of "father of recorded sound". This academic term, a French student pointed to the 10-second recording of a singer crooning the folk song "Au Clair de la Lune" from an archive in Paris. A group of American audio historians believes the recording was made on 9 April 1860, on a phonautograph, a machine designed to record sounds visually, not to play them back. But the phonautograph recording, or phonautogram, was made playable when scientists at the Lawrence Berkeley National Laboratory converted the squiggles on paper to sound.

Jody Rosen -- "Researchers find song recorded before Edison's phonograph" in the International Herald Tribune, 27 March 2008.
Photo by Isabelle Trocheris of the audio historian David Giovannoni with a recently discovered phonautogram that is among the earliest sound recordings.

IF YOU BACKPACK into Ireland for a cultural celebration and you're not Caucasian, you will enjoy a closer review of your intentions. That's what a group of three students discovered when trying to make a short break into Dublin right around St Patrick's Day this year. The Latin American News Agency reports "three Brazilian university students denounced being mistreated by immigration authorities in Ireland, saying that instead of enjoying a week-long holiday, they were imprisoned for 40 hours in the European country." 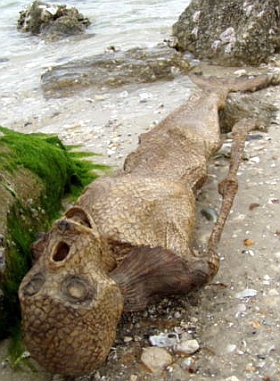 YOU CAN BUY an authentic mermaid corpse at a current auction on eBay. Scientific readers will know that integrins are a family of heterodimeric receptors essential to cell adhesion in all metazoans. Scientific papers have presented phylogenetic reconstructions for the α and β integrin subunits based on sequences from 24 invertebrate and vertebrate species, including the fully sequenced genomes of the ascidian Ciona intestinalis (a urochordate) and the pufferfish Takifugu rubripes (a teleost). Both genomes contain integrin α subunits that have the inserted αI domain. Although the Ciona αI domains are missing the distinctive characteristics of mammalian collagen receptors, they form a new subgroup of α subunits with αI domains. Each of the pufferfish αI domain sequences does have characteristics of the collagen receptor αI domains, but no leukocyte-specific αI domains were found in pufferfish. Comparative protein modeling suggests that several of these fish αI domains are structurally compatible with binding to a GFOGER sequence in a collagen triple helix. So it is possible that humans trace their evolution to fish.

WHEN IN COSTA RICA, you discover the tree frogs are as nice as the coffee. Super treefrog model arranged and photographed by mpompen. 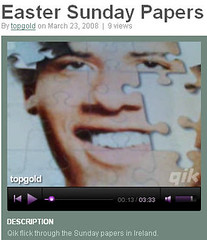 BARACK OBAMA gets nearly as much ink as the embattled Taoiseach of Ireland today. Bertie Ahern's photo appears prominently on the front of several newspapers, often with a confused look. The glossy coverage for Obama is worth reading, especially the Sunday Times Magazine cover story. [1] I flicked through several stories while making a short 3:33 video about the most interesting items, using my Nokia E90 and Qik. One item documents that Ireland's Health Services Executive has lost 55 laptops during the past three years, including one which contained the personal details of 500 patients. [2] The issue of third level fees in Ireland won't go away and it arises in the Comment and Analysis section of the Sunday Tribune again today. [3] Core funding per university student in Ireland has been reduced by a third since 1995. That funding shortfall would not be as significant if Irish students contributed to the cost of their third level education.

Why We Bought the Book

CLEVER BLOGGER TWENTY MAJOR appeared on the shelves of our Limerick book seller last week so we picked up a copy for a quick read--not because of the anticipation of the extended story behind Stinking Pete but because our Silicon Valley correspondent had dismissed the book out of hand. We plan to weave Twenty's story into a first year creative multimedia module next academic term. In today's Sunday Times, Colin Coyle gives a few more inches of coverage to The Order of Phoenix Park, while pointing out that bloggers have a ready-made readership if their work is picked up for publication. The Sunday Tribune gives Twenty a catchy photo and a platform for witting commentary. Our own printed story needs another decade of breathing room before we can safely write the preamble to the Bourne series with copy flowing from truly anonymised late night flights, high-speed car chases, dalliances in the cockpit, and a few other vignettes that made life in the 80s a story more engaging than big hair and loud music.

Continue reading "Why We Bought the Book" »

We like Henry's in the Main Street of Cashel for our coffee and most weekends we're along the back wall with our large cups, our newspapers and our over-sized cookies selected from the counter out front.

We like our coffee ground fresh from Caffee Duomo Espresso Italiano beans. These are Arabica coffee beans, grown at high altitude and roasted dark for a smooth taste and intense aroma. The cuppa coffee tastes all the better (see our Qik video for the evidence) when accompanied by a few Irish newspapers, normally free for the reading when put back on the tables where you find them in the front of the shop. 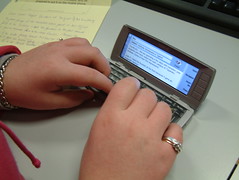 FOR SEVERAL YEARS NOW, I have used mobile phones to connect with social networks. And while spending thousands of euro to feed my mobile communications habit, I have realised that many of my friends couldn't be bothered with using their phones for more than phone calls or text messaging. Yet there is so much value from setting up a mobile phone to hook into your online social networks. There's great value in being able to record where you are with a quick photo uploaded to Flickr, a short recording shared on a social network or some location data pushed across an application to tell friends that you're in town. Paul Walsh has asked what people want from their mobile social networks. I have a few ideas in mind.