I SPENT TWO DAYS drinking Citrix Kool-Aid in the pleasant surroundings of the Edinburgh International Conference Centre and emerged into a fresh summer shower with the belief that the next great platform for the internet will be built on virtual properties, not on the backs of towering web-enabled platforms. I use a lot of web platforms--software code behind Six Apart's servers, communications platforms that don't scale well, and online shopping carts that often fail in epic ways. In an industry fueled by racks of servers and legions of corporate users, big giants like IBM and Microsoft can easily lose their perch points when pure web players like Google enter the game. The successful newbies don't just slice up market share. The game-changers just push everyone aside like Google did to AltaVista, Yahoo! and Excite.

THROUGH MY OWN CARELESSNESS, my Nokia E90 reverted to a power-saving mode during the most high-profile Qik video I created. With two minuites of the 4-minute video uploaded, the phone warbled its low battery warning and then quickly shut down all camera operations. That's what my phone is set to do, just in case something happens to deep-drain the batter. So at the moment, I have 9.4 MB of raw QIK video sequestered in a folder on the phone's main memory. I also have a 3.6 MB FLV file. I would like to upstream the raw video to Qik but I don't remember how to do this. So I'm asking for help with this blog entry.

UPDATED ONE DAY LATER. I've resurrected the raw video file from the main memory in the Nokia E90 and after several attempts, I sent the file via email to Jackie as requested. 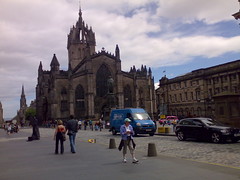 I HAVE STRONGER CALF muscles now that I've ascended the Edinburgh Castle Terrace twice in a 40-minute period. I accomplished this little aerobic exercise while carrying a suitcase in search of the Apex City Hotel. It took me two passes abeam the hotel on a high road behind its front door before I realised where I was--Edinburgh for a major industry event with Citrix. I'm gathering a lot of ideas about ways to leverage Citrix's virtualisation when using hotspots for Voice Over Internet Protocol (VOIP) and found exactly what I was looking for within an hour of entering the Edinburgh International Conference Centre. At first glance, it appears I can get a bank of older computers to look like the inside of phone booths from around the world. More on that later.

Equally important is seeing how Citrix delivers a high-end solution for people working with CAD drawings, 3D renderings, and Adobe Flash movie clips. For ages, we have encountered issues with software being left idle on workstations because our talented creative multimedia degree students could not get to the packages to do their work. Over the past three years, I've seen how Citrix could solve part of this problem and I am delighted to see processor-intensive rich media applications being served across the cloud for people to manipulate on low-cost laptops and Apple iMacs. Just this experience alone makes my short trip to Edinburgh a productive one. Walking by buildings like those in my Edinburgh photostream is justification to spend time in this charming city, even when Citrix packs up its booths and goes back to base.

Thanking Simon Fitzgerald of Text 100 for arranging my Edinburgh visit. Image of Lawnmarket snapped by my Nokia E90 shown above. 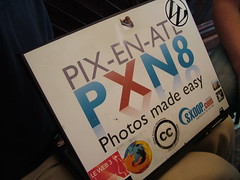 PIXENATE IS MY online photo editor for photo printing and sharing businesses. I visited Cork OpenCoffee today to look at Pixenate running inside of both Wordpress and Movable Type and I have set aside some time this month to see if I can weave Pixenate into Typepad, the service behind Inside View, my weblog. In the next semester, for the running of Ireland's first semesterised college degree programme in creative multimedia, I will have a series of tutorial deliverables that leverage Pixenate features to the hilt. In brief, we plan to have students use their cameraphones while in the field, building digital tourism promotions and upstreaming reports on cultural events. The student work is meant to be the first of its kind, focusing on things found in Ireland but not found in Google. With Pixenate, students can upload crappy photos and then use the Pixenate plug-in to remove blemishes to the original uploads. We plan to upload to Flickr groups via Zonetag on Series 60 Nokia phones and we plan to send some images directly to Movable Type's asset manager via email. As the streams of information unfold, we plan to showcase some of the best work on the Tipperary Institute website and as cover art at the podcasting site. In the meantime, we are gracious to the Pixenate functionality because it allows us to look much more compelling on account of its editing power.

I heard about the Pixenate plug-in by reading Walter Higgins on Jaiku. Then I decided to travel to Cork to get a hands-on demo.
Testimonials about Pixenate. Photos from OpenCoffee, some that could benefit from Pixenate.

I HAVE A THEORY that one reason people meet up in five-star places is to seal deals faster. That's one conclusion suggested by a BBC Report that claims biscuits clinch business deals. The business news item says "about four out of five UK businesses believe the type of biscuit they serve to potential clients could clinch the deal or make it crumble. The outcome of a meeting could be influenced by the range and quality of biscuits on offer, Holiday Inn said." Here is some inside information: "Of the 1,000 business professionals quizzed, the chocolate digestive was deemed to make the best impression followed by shortbread and Hob Nobs."

IZOTOPE RX has a new Audio Restoration Guide available for download. The free 75-page PDF guide and audio examples are helping me to master audio restoration by learning how to clean up audio clips by using iZotope RX. The guide includes real world audio examples and step-by-step walkthroughs.

I learned this from the mail dropping onto my Nokia E90 phone.