IN A LETTER to the Irish Times editor, Ryanair CEO Michael O'Leary exposes "another factually inaccurate opinion piece from one of the small band of eco-loonies." O'Leary explains why it is absurd to lay the blame for climate change on the runway of low-cost aviation. His arguments against the "eco-babble" ring true on many points.

Aviation is Cleaner Tech. There are compelling reasons on airline balance sheets (depreciation, reduced insurance fees, lower airport noise rates) that encourage companies like Ryanair to switch from older, polluting aircraft to newer, quieter, fuel-efficient aircraft. "Ryanair ... Has reduced its emissions per passenger-kilometre by 50% over the past 10 years." For many on Irish roads in the same 10-year period, throaty exhausts or "safer" SUVs means fuel efficiency was not a player.

Airlines Buy Their Own Infrastructure. O'Leary explains, "Contrary to the myth that airlines are tax exempt or don't pay taxes, we are the only form of mass transport within Europe which pays for all its own infrastreucture (runways, airports, air traffic control, aircraft) at a time whe Europe's ferries, trains, buses and roads continue to be massively subsidised by taxpayers."

It makes sense to fly off the island. There is no way Irish tourism would survive without strong airlinks.

Exploding the Eco-Tax Myth. O'Leary hits this point to great effect. "The biggest lie at the heart of all this eco-babble is that higher taxes will somehow save the planet. This is simply untrue. Higher taxes simply means greater governmental revenue, waste and misspending. " And O'Leary is right. "Higher taxation will not reduce people's propensity to travel." 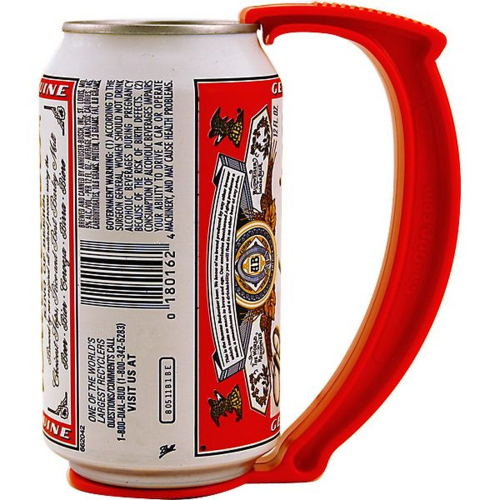 UPDATED 7 FEBRUARY 2021: I have ordered another six red beer can grips and plan to use them along the River Suir during the Fourth of July in Clonmel.

AN ESSENTIAL PIECE OF EQUIPMENT for the Open Coffee Club BBQ has to be the beer handle. With this finely detailed accessory, you can hold a cold beer in your hand while enjoying the pleasant summer breeze blowing off Lough Derg. And when someone bumps in to you, your precious tinnie won't slip out of your hand and fall onto the ground. This personal accessory ensures you can hold onto the can because the Beerhandle snaps securely onto any 12oz can giving you an easy to hold handle. The Beerhandle is available in four colours and ships immediately upon payment of €3.33. We have field tested the handle with Guinness cans and have to disclose that the larger Smithwick's tinnies should be poured into 12oz cans to ensure a tight grip.

THROUGH A COMBINATION OF solar power at home and battery packs on the road, I think I'll be driving some kind of electric vehicle before the end of 2012. The delay is brought about by my bank account, not by the technology itself. BMW have an electric Mini in development. Mercedes Benz is developing a luxury class line. Tesla's coupe is rocking with acceleration normally reserved for Lotus, the body style it emulates. NICE car company has a electric commuter runabout (at left) good for 40 miles of travel. All these options are eco-friendly and worth considering by people with short commutes to and from work.

WE HAVE SPENT THREE arduous weeks using over-the-air connectivity as our exclusive means of updating our blog, interacting with our virtual classroom, making video and listening to audio. We chose this test pattern in order to validate some significant features related to serving students in our third level creative multimedia degree programme. We want to build and test academic touchpoints that fit into your pocket, like the small book and phone at left. Along the way, we have discovered viable strategies.

Continue reading "When Classroom Contact Fits in Your Pocket" » 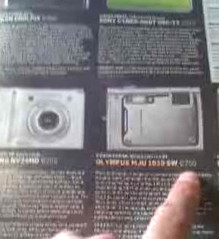 WE TAKE A FEW MINUTES to glance at technology in the inserts inside today's Sunday papers in Ireland, like the camera reviews (underwater one gets the index finger) shown at left. The Observer Magazine has a few advertisements worth noting, the Tribune Magazine spotlights a teenaged podcaster, Computers in Business mentions a lot of interesting content, the typical "new products", some deep thoughts from Adrian Weckler about Next Generation Networks (not what they are made out to be), and an illustrated piece involving several Irish bloggers (not the usual suspects) in an article about business blogging. In the Sunday Observer, John Naughton explains why Amazon has got it right. All these things in my Qik video (also as a 3GP file), with links to content shown below. 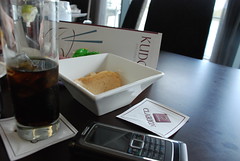 GOOGLING IS ONE OF THE THINGS I believe will commonplace when sitting around with friends in pubs. Today, you need a smart phone like the one at left because web browsing isn't normally associated with people's purses. Thanks to the iPhone making a mobile operating system more of a mainstream idea and because people are starting to look for free wifi whenever they meet up with friends, someone at your table is probably going to nonchalantly ask Google, tweet to their friends, or check out a mapped destination while trying to get best value for money. The big chipmakers know this, meaning Intel is getting ready to produce processing power for mobile devices.

Sticky, Simple and Over the Air

WE HAVE A MONTH-LONG EXPERIMENT running where we will use only over-the-air data services to stay connected to an online classroom environment. We intend to find the best ways to ensure students with poor internet connectivity can remain attached to their virtual learning environment. We use Moodle as our virtual learning environment and several phones from Nokia and SonyEricsson, including the SE P1i at left, to test e-mail, audio, video and still photography capability. We already know some of the methods that work and our immersive experience has validated some important conclusions.

Continue reading "Sticky, Simple and Over the Air" » 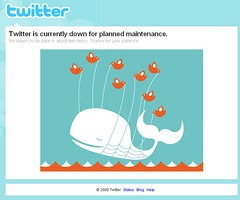 I JUST RETURNED from a communal lawn mowing session with two other mowers, one trimmer, two sweepers and one skip driver--they didn't connect with my world of Twitter. They didn't know what to make of the whale on my t-shirt (see left). Not that I expected anyone in the neighbourhood to know about Twitter. (Short answer: it's like a public bus with a community water cooler just inside the door.) We're community mowers, social drinkers and over-the-fence whingers. We are connected by three things: mowing, drinking and complaining. You can only complain on Twitter. You cannot do yard work or get drunk on Twitter. As summer reaches its high and rainy point this month, I need to spend more time outside and much less time skimming the waves on Twitter. So as I depart from my perch, I'm willing to make three predictions about Twitter and the community there.