FOR SEVERAL YEARS NOW, I have used this microblogging platform called Twitter and I've tried hard to fit into its demographic. But as Time Magazine now suggests, I'm not the Prius-driving, iPhone-drooling, Facebook-addicted 30-something who fits the target user. The statisticians at Hitwise say that males comprise 63% of those tweeting. And more than half of Twitter's visitors come from California! The largest age demographic sweeps through the 35-44 year old part of the population, since that segment makes up 25.9% of Twitter's users. Although I think I'm part of the H03 "stable career" segment, I'm not young or ethically diverse, nor do I live in a big-city metropolitan area. However, I consider myself cosmopolitan, so that should count. Upon further examination, someone with a "stable career" also tends to work in the arts and entertainment industry (Hey! I listen to podcasts, take photographs and go to art galleries!), drive small cars and espouse very liberal political views. Another 12.3% of Twitter's visitors are H01. They are the "Young Cosmopolitans" and are very likely to drive a Prius, earn household incomes over $250,000 per year and also identify with very liberal politics. I am not in that segment. I don't know if it's worth my while trying to fit into Twitter.

I HAD TO LEAVE DUBLIN before checking into Team Contrast and their centre city premises. James Corbett points to the Dublin-based web development as "a direct product of the modern Irish web scene." Corbett followed the genesis of the idea from its roots in the coworking scene.

I spent a year on a career break inside a makeshift incubation centre that's nothing like the digs Eoghan McCabe and the crew have in Merrion Square. And fair play to them--they knew what they needed and just did it. That's what they're telling others--just set up your coworking space and it you've got the right mix, you'll attract a cluster of like-minded entrepreneurs. 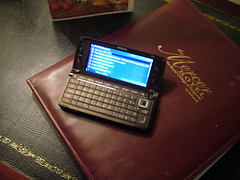 MY NOKIA E90 beeped me awake this morning as its fully-charged battery politely affirmed it was ready to be unplugged. The Nokia BP-4L is one of the largest batteries on the market, its 1500 mAh powers me through most work days as long as I constrain my data usage to no more than 90 MB. Beyond the 100 MB threshold, I forget to turn off the signal searching and that can mean a battery swap before my 10 hour duty day is finished. No worries--I carry a spare battery and swap-out is a doddle. I'm thinking about these things while listening to FIR over a 3.5G antenna array alongside Stephen's Green in Dublin. The O2 over-the-air speed feels faster than the BT Broadband offered in the Mercer Hotel, my centre city hotel of choice. I like the place because I watched it being built. And I like the history under the place as documented in Beaux House across the street. Lots of unfortunate bodies are deep under the structures here, remnants of the live surgeries performed by the Royal College of Surgeons on impoverished Irish centuries ago.

Starting a Business in Ireland 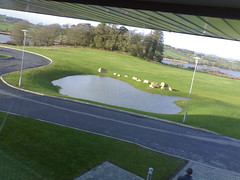 ONE OF THE COOLEST places I have ever visited sits just outside the main campus of the Waterford Institute of Technology (WIT) and it offers a place for start-ups to grow their business idea. It's the Arclabs building (viewing the landscape outside one of its windows at left) and it holds some of the brightest minds in southeast Ireland. The South East Enterprise Platform Programme (SEEPP) helps interested start-ups take a place inside the Arclabs, but it's competitive and there are some considerations to weigh in the balance. The next set of openings occur in September 2008 and applications are currently being interviewed for a place on the programme. SEEPP is a vibrant programme, supporting start-up companies in the South East region since 1998. More than 140 new enterprises have gained benefits from SEEPP, in areas as far-ranging as e-learning, software development, education, entertainment, food, engineering, manufacturing, waste management, energy, medical devices, and pharmaceuticals. But it's not for everyone, and the interview process sorts out that detail.

Immersed in the 90s 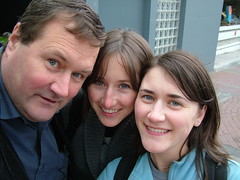 WHILE SITTING AT THE kitchen table with my Stateside daughters (at left filmed while outside in video footage by Pat Phelan) hogging my laptop, I saw some of my work practises from the 90s played out in front of me. That doesn't mean my girls are caught in a time warp. It just means they revel in connecting by using techniques no longer my primary means of communicating. And that means I have to change my ways to connect with them more efficiently. Specifically, I need to return to instant messaging, check my email for trusted sources, and render at least 30 seconds of video every day. Let me explain.

Continue reading "Immersed in the 90s" »

WE HAD TO SOURCE power adapters for several American visitors this summer in Ireland because their battery power was so abysmal. They weren't stupid so they didn't use the phone to call anyone but they were using their iPhones as entertainment devices, cameras and wifi browsers. They rarely got more than four hours' use out of their iPhones when playing music, shooting photos and browsing. And from my own experience, there is no way the 3G iPhone outlasts a Nokia E90 when used during the work day. I know my experience is only anecdotal because Strategy Analytics tells people the 3G iPhone holds up well, saying standby time on the phone is average for a 3G handset. Maybe so, but 3G iPhone standby time is not as good as Nokia E90 standby time when hanging out in my Bihn bag. In fact, my hands-on experience suggests the iPhone is the most energy-sapping mobile telephony device I have ever used.

I GREW UP WITH SHAFT, and that means I listened to hours of work by singer and arranger Isaac Hayes. The man won Grammy awards and an Oscar for the theme from the 1971 action film "Shaft." The Shelby County Sheriff's office reported that relatives found Hayes, 65, unconscious in his home next to a still-running treadmill. I spent a weekend in Shelby County, passing the hospital where paramedics attempted to revive the singer. Isaac Hayes died shortly after 8 PM Irish time today. No foul play is suspected. The world has less funk with the great man's passing.

More in a CNN Obituary. Remembering "Walk on by" by the man himself.

EVERY WEEK, I TRY buy a fresh Sunday newspapers and then make a short video about tech news on Qik.com/topgold but this week, I want to spotlight something that terminates today's 11-minute video. It's the SonyEricsson W980i (at right). I think the phone delivers real value-for-money for people who walk with music in their earbuds, especially when compared to the 3G iPhone. Several Sunday papers have the advertisement running about the phone, including The Observer Music Monthly, a magazine with excellent coverage of who makes money from music sales. [0] James Robinson talks to photographers, drug dealers, radio DJs, stylists, band members, website editors, tour managers, music pluggers, independent PR handlers, guitar techs, office juniors, music journos, venue managers, lighting engineeres, and promoters. His documented conclusions make interesting reading.

SAY YOU'RE SETTING UP SHOP in a country known for its censoring of information. If that's your remit, you might consider buying a trunk-sized bundle of ISDN lines. Dutch commercial broadcaster Radio 538 has done that, enabling it to broadcasting live from the Beijing Olympic games, defying both the Chinese censors and the IOC. The only Dutch broadcaster registered to provide coverage from Beijing during the Olympics is public broadcaster NOS, which is the Olympic rights holder. But Radio 538 decided to broadcast its breakfast show live from the Chinese capital. You have to be registered to broadcast, and your output must port through the  Olympic Broadcast Centre, where censors can impose a transmission delay. That sucks when you're trying to hold a conversation with a live presenter back home. Radio 538 still has a delay of around one second, but its team has avoided the Broadcast Centre by hiring blocks of expensive ISDN phone lines.  They rotate between numbers--using at least ten new numbers every day--confounding Chinese censors. They use smart switches that can connect over an open ISDN line once an operating line appears to be cut. After the first two days, the connection with Beijing has been down for only 20 minutes on one day.

WE REGISTERED FOR an eFlow windscreen tag and might have become a little confused after the direct mailing dropped through the front door. The eFlow device is designed to support barrier-free movement around Dublin on the M50. A series of sensors reads the electronic tag when it's mounted on the windscreen. We plan to mount it in the boot and see if that affects anything. We have to pay €1 per month for having the eFlow windscreen tag. I think the tag is transferable--something else we're going to check after the system comes into effect on 30 August 2008. Television advertisements make the point that if you're unregistered,  you have to pay for your journey before 8PM on the day following your romp across the old toll plaza. All sorts of penalties and court snags face those who don't pay. Now the big news for us: "You will be able to use your eFlow tag to pay your tolls electronically at toll plazas nationwide." To us, it appears to affect the M8 en route to and from Cork. We'll keep readers advised.