ON TWITTER, I hear plenty of pain tweeted about tatoos so I thought I'd point to the most painless tat I've seen, As the photo shows, they're done with blacklight reactive ink. You see the tattoo under blacklight, making you a big hit at parties and in the toilets at several Dublin city centre clubs. The site asks, "How safe is Chameleon blacklight tattoo ink?" And the FAQ says, "Given its extensive testing for FDA approval, with absolutely no adverse reactions to it in over ten years, it is all in the proof, this ink is most likely the safest ink on the market."

See more from the Tatoo Artists and Blacklight Ink. 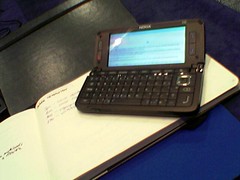 IN JANUARY 2004, I started using the Motorola V525. I liked that phone and I really like comparing it to the phone I use today, the Nokia E90 (at right). 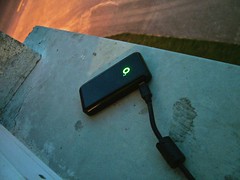 SINCE I LIVE in a rural town in Ireland, I have first-hand experience using several flavours of internet access. It bothers me to hear government ministers gushing enthusiastically about covering Ireland with wireless internet access because I don't think those spokespeople have ever tried to run their official duties using only over-the-air internet services. I have tried to accomplish that feat. I have the bills to prove that I consume more than a gigabyte of data using wireless internet services with O2-Ireland. I have dozens of screen shots that show the kind of speeds I get with the service and if there was such a thing, I would be a member of the Irish Dangling Dongle Society (see O2 dongle at right on my window sill). After years of working over-the-air, I think the Irish government is headed for a massive disappointment with the money it will spend to connect rural areas to broadband.

SINCE THE OBAMA team checked into the White House, millions of broken links appeared on the WhiteHouse.gov web site. However, all is not lost. The National Archives advises that you can still get the old content by replacing the www.whitehouse text with "georgewbush-whitehouse.archives" and you'll locate all the gems. So if you wanted to wind back six years to the National Day of Prayer you would have this 2003 link:

The new URL is:

So Happy for Wi-Fi

I WISH AN ECONOMIST INTELLIGENCE Unit Survey would document the productivity that traveling business workers enjoy if they can access free and open wifi service. It doesn't even have to be as fast as the screenshot at left. Four years ago, the Economist revealed that "63% of companies (are) currently evaluating or implementing wireless technologies. The top benefits perceived by companies are that it supports flexible and remote working (46%) and helps employees use travel time more efficiently (40%). Thirty-five percent also felt it improved collaboration between dispersed teams. Twenty-four percent cited keeping on top of e-mail as a personal benefit." All these benefits are part of my work life. But perhaps the biggest benefit I enjoy is running Seesmic video conversations and Online Meeting Rooms for class work while untethered from the scheduled classroom environments. 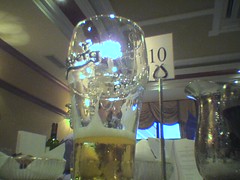 FOR THE PAST MONTH, the mainstream Irish media have started pointing out the toxic combination of ingredients in Ireland that have made the Irish economy a world leader in the econopalypse, the deep worldwide recession. A tyranny of greed pulsed through the Celtic Tiger, led by a corporate bonus system that has morphed into an entitlement culture. That sense of entitlement reigns supreme at both the top and bottom ends of Irish society. Today, the gravy train has come off the rails. Swinging cuts in funding for the nanny state lie on the table for Irish social partners to consider alongside ruthless job terminations. The overall Irish economy has slowed down so much that Ireland will easily meet carbon reduction targets for 2009. Peak oil caused some companies to become eco-aware and some economists point to peak oil as an econopalytic reference point. Everything manufactured and transported will cost more because of oil pricing and also because of the higher cost of ramping up to a greener alternative. There is no disguising the fact that our glasses are less than half full at the moment.

MY PENNSYLVANIA brother is sending me a document package containing newspaper clippings of detailed coverage Irish readers don't get about the Obama family taking the slow train to Washington. The final movement of Barack Obama into the nation's capital was on rails. Meant to recall the movement of the Continental Congress as it established a base in the District of Columbia, it distorted some real truths. Back in the late 1700s, politicians rode horses and some needed carriages. Most importantly, some elements of the Continental Congress decamped from Lancaster, Pennsylvania. In fact, George Washington's horse slept in one of my family's out-buildings (the cladded structure at left). We used it as a warehouse for canvas marquees. Because it was listed, the local authority did not inspect its fire retardant nature. When I left Lancaster, the old horse stable had three-wire wiring powering a few naked light bulbs. Its human-powered elevator still worked. Men would lift the horses to the second story. The ground floor--still dirt in some places--was for the blacksmith and groomers.

SAY WHAT YOU WILL about President George W. Bush, but few international politicians have done more to advance the careers of comedians than the most unpopular President in the history of the United States. Some of his burblings made easy copy for corrections by first year students enrolled in a Media Writing course that I teach. For posterity's sake, I've included a few of these gems below. You wouldn't be able to scrape the same kind of creative prose in Ireland because the record of the Dail are normally sanitised to remove gaffes. 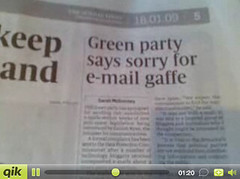 SEVERE LOGISTICAL PROBLEMS cut my weekly Qik video clip to a short piece covering just the Sunday Times. The screenshot at left refers to a piece of e-mail a few Irish bloggers got from the Green Party. It's hard to spend any time online without receiving unsolicited electronic communications and that's the back story with the Green story. [1] There's a lot of coverage concerning the deepening Irish recession and Barack Obama's ascendancy but I don't cover either issue in my seven minute [6.5 MB 3GP file] today. Instead, you can listen to how thousands of Irish people are watching digital channels illegally--and don't think it's wrong. [2] State broadcaster Gerry Ryan figured out that his book deal gives him eligibility to use an artist's tax break. [3] In between all the extensive coverage of US Air's landing in the Hudson River is a litany of largesse enjoyed by post-Celtic Tiger Ireland. I wonder if anyone in the Irish Department of Finance thinks it's proper to fund politicians at a higher pay scale than the US Air captain who brought 40 years of experience to a perilous situation and yet his compensation package (earnings and pension) falls below that of national politicians in Ireland. In fact, the executives of many government agencies earn far more than senior airline captains. In a recessionary era, those pay scales need to be revisited.

THE LIMITS OF TECHNICAL skills that I hear running about in County Tipperary sometimes come from the exhasut systems of modified hot hatchback cars. These "hot hatchers" awaken me at night and one of them knocked down and killed our cat. Sometimes their driving causes accidents and even fatal accidents. Last week, some of Ireland's leading rally drivers hit out at the Irish boy racer culture, a sub-culture that is like a boil on the landscape of County Tipperary where I live. Rally Sports' "best newcomer" Shaun Gallagher said those who engaged in the sub-culture have nothing to do with his sport. In a report carried by the Observer, Gallagher said, "I don't think these people have a clue about the safety provisions we have in rally cars. A rally car can cost anyting up to £700,000--a lot more than the souped-up £2,000 car we see on the roads, ignoring every law that has been written."

Henry McDonald -- "Rally driver in attack on boy racers" in the News section of The Observer, 18 January 2009.