I REALLY APPRECIATE Six Apart's launch of the TypePad PubSubHubbub hub because it means my blog will update in real time across various networks (i.e., Google Reader, FriendFeed, SuperFeedr and LiveDoor). Because it's a Six Apart service, I don't need to use a plug-in. I just have to add a single line to my Atom template because I use advanced templates on my Inside View blog. Here's the line needed to the atom.xml file>

Another Semester, Another Carcast 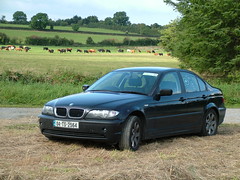 IT'S THE START of another academic semester in Tipperary Institute, so Manuel Svay and I jumped into the Batmobile (at right) to collect Dervala Hanley for a creative conversation with multimedia students in Clonmel. The audio levels recorded in the car will challenge many earbuds, but we're releasing Educast 150 [28 MB MP3 file] with plans to resyndicate the episode after it's cleaned during an audio production tutorial. Erasmus student Manuel Svay talks about following his brother's career path, perhaps towards Netvibes. Dervala reflects on getting jobs in today's tough market. The car's road noise gets sucked in through the shotgun mic, something we know how to solve with a DI box that we didn't carry today. And through all the conversation comes the very pop-heavy tracks shared by Fiona Kearney from her Last.fm library.

I FINISHED A LONG DAY with 18 young film makers under the cross of Devil's Bit, watching a story of a special tatoo evolve as the script runs its course. The day was just the start of a longer process of post-production and today's work (12-second video here) runs alongside several Thursday afternoon "Pocket Media Production" sessions that Tipperary Institute runs in conjunction with the Tipperary Regional Youth Services. There's a lot of creativity in those sessions, some that should evolve into portfolio work by second level Irish art students. I'm sure that we have some loose ends with filming because it's the first time that these teens have used SD cameras, boom mics, and recording equipment that forms part of an accredited third level creative multimedia degree programme. Perhaps the most significant finding I take away concerns the overall aptitude shown by these teenagers during our workshops and filming sessions. Watching how they approach new challenges with open minds and can-do attitude makes me less likely to accept complaints or poor performances from students who are four or five years older. 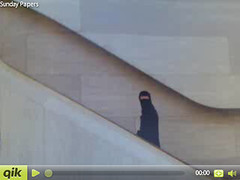 EVERY SUNDAY, I TRY to skim through the Irish Sunday newspapers, choosing just a few for a Qik look at news articles and technology items. The cover shot (at left) comes from a photo by Jeffris Elliot in Spectrum, part of the Sunday Times Magazine. It's a serene image of a Muslim woman riding an escalator in Washington, D.C. In the seven-minute Qik clip, I mention in passing the constant talk in Ireland about budget deficits. The conversation this week spotlighted more ineffective public spending that should be constrained. [1] [5] Several commentators believe the future of the ruling party lies in its quick exit from government. [2] Several Sunday news items caught my eye for their cost-saving potential. [3] [4] [10] The Technology section ran articles about IRCSET, a new Diaspora website [6], Bitbuzz revenue [7] Apple iPods [8], and consumer rights. [9]. Of interest to some readers, the Sunday Business Post is running a conference for entrepreneurs and small business owners on 21 Oct 09 in the Guinness Conference Centre. An interesting cross-section of speakers fill the agenda but no web site URL appears in the half page colour advertisement for the event. In fact, the conference isn't listed among the upcoming events on the SPB Conference site. Perhaps that's all the more reason to get one of the EUR 25 seats (email conference@sbpost.ie) by being one of the first 200 bums on seats.

Additional information below the break.

Thoughts from the Pasture 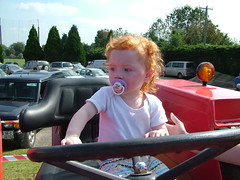 WHILE WALKING ACROSS several acres of warm pasture today alongside 80,000 other people (driver at right included), I wondered what connected Ireland will be like in two years. Several of the connected communities that I saw under sun-swept awnings in Piltown, County Kilkenny, today depend on State grants to build websites (like this one) and to fund meet-ups between rural communities. That funding is going to dry up quickly. The regional authorities (responsible for WasteNot.ie, the site I watched being re-dedicated in front of a small group) are withering, manpower returning to local authorities and central government funding cleaned out. Mobhaile, the multi-million euro blogging project, is shuttering, without any handshakes with the locals who used it. That project served several community groups well. The energy behind the online communities should be steered towards low-cost blogging platforms. Some of the Mobhaile groups could do well on Facebook. It's remarkable that so many rural communities actually established their online identity because that means they had some form of internet service close to the farm. It would be a shame to lose the initiative when funding lines dry up. In my Tipperary Institute position, I'm working with the Rural Development Support Unit, trying to figure out a way to directly contact those community groups who will be cut loose without support due to the austere government budget in December. I'm sure that as I walked the fields of Piltown, I saw the faces of hundreds of people today who will be affected by those cutbacks.

Just Before the End of the World

I TELL SOME people that I used to work at the sharp end of the stick while flying the pointy end of a big aircraft during the closing days of the Cold War. I spent some of those days watching events like the one in the film clip by by maintenance men from Griffiss Air Force Base that could easily have preceded the end of the world.

The four minute clip shows a live Minimum Interval Take Off (MITO) from the 1980s, the time when I would fly missiles weighing 70,000 pounds around the United States. Boyhood friends of mine flew the B-52Gs in the shot and several of my close friends flew the KC-135A aircraft.

Continue reading "Just Before the End of the World" » 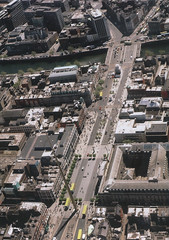 BACK ON THE 11TH of September 2001, Twitter didn't exist when I was sitting at a desk in High Street, Dublin, watching a flow of messages coming as fast then as a shitstorm on Twitter today. I was watching the Open Mailing List in Ireland, a virtual watering hole that threaded commentary elegantly through a time-tested email technology. If I made a screencast of that day on the Open Mailing List, the results would like like a Twitterstream. Within a half hour of the first email string, we knew something other than a light aircraft had hit the World Trade Center. That's because I rang my aunt after I read Doc Searls. My aunt could see the impact site from the 14th floor roof top terrace of her convent. She told me that a local fireman stopped in briefly at a side altar of the church below the convent and that the NYPD was reporting shards of a commercial airliner. As an instructor pilot, I've flown over NYC, down the Hudson at skyscraper height, and around the upraised arm of the Lady in the Harbor. The skyline looks different today. Losing the twin towers in NYC would be like Dublin losing the Spire (at left) or Liberty Hall along the quays. I've returned to NYC several times since that fateful day and the thing that impresses me most is that the city has become friendlier. I've stayed overnight with friendlier staff than I find in Ireland. And I've enjoyed vibrant multiculturalism that I consider to be the best in the world. If I can save the money, I'm returning with my family to New York before Christmas. We don't feel pressed to walk close to the WTC ruins because we enjoy our New York minutes all across Manhattan.

EIGHT YOUNG PEOPLE finished the first Pocket Media Workshop that Tipperary Institute supported this academic term. During the next eight weeks, fifth year students in Templemore will produce a short video clip for public viewing on something they have observed or on an item that they would like to promote. We're limited to using things that fit in pockets (i.e., pencils, markers, paper, mobile phones, earbuds) but we're also able to use a small laptop that fits into my Bihn bag. The first 90-second compilation came after 38 minutes of brainstorming and chatting to a Nokia E90 for a concept discussion. Participants uploaded the video work live to Qik.com (see the Pocketmedia group). The full video gives a better idea than this short paragraph on my blog.

Getting Credit for Small Talk

I shudda said...!
Originally uploaded by conwaykt
I FACE A BACKLASH inside Facebook for mooting the idea of awarding academic credit to students who use Twitter effectively. In both my Facebook tribe and in discussions with academic peers, people "fail to see the academic merit in" awarding third level continuous assessment credit for those who tweet. Moreover, several voices I respect believe Twitter does not deserve to be elevated to a job-winning status--insinuating that tweeting well does not translate into a job skill that prospective employers would seek to endorse. Along the margins, I hear others who have leveraged Twitter for "connecting to nixers" and several colleagues believe "well-formed sentences are the essence of attention-grabbing subject lines" as well as being one of the foremost reasons why newspapers sell at the counter. I respect those who read and comment on my Facebook page, so I'm not going to risk their wrath by revealing how I integrate Twitter in my academic curriculum. I'll let my students do that on their own Facebook pages. As for the strategic goal of using new forms of communications technology, I sincerely believe we owe it to the Irish taxpayer to unpack and refit creative problem solving approaches because we've less to lose when we control communication technologies in our academic environment. And if I do it right, I suspect I will be able to point to several dozen first year students who can elegantly use microblogging technologies for best effect. If they cop onto the core skillset, they will emerge as effective communicators and no one will know they got dirty in the twitterverse. 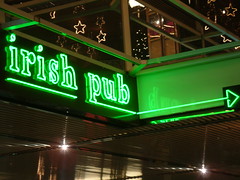 IT'S 090909 and on key dates like that, I flickr backwards while connecting the timeline. Today is a highly creative day, the day I'm making "create" a category on my blog, a day I'll celebrate with a pub session too. (I wish it could be a session in Berlin, where I snapped the photo at left.) The #create theme is something we're tracking at Tipperary Institute because we want to mount a highly creative exhibition in April 2010. It might be our last Digital Expression event in Tipperary so we're making big plans for it. In our Creative Multimedia degree programme, creative skills weave together with clever technology and often produce very compelling inspirations. I know that by 101010, I'll be unveiling some of the code behind the creativity that I've considered to be the best work of a generation of talented Irish creatives.