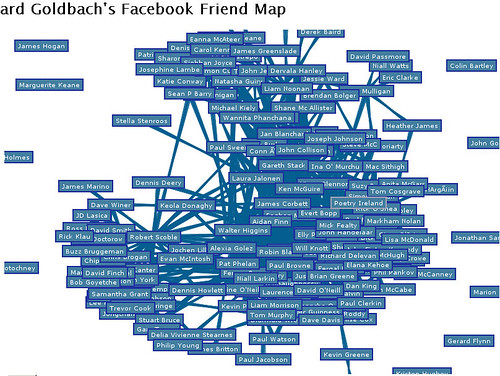 WHILE CHATTING WITH social entrepreneurs in Dublin, I tested the water concerning the vitality of Facebook as a connector node. I was surprised to discover that fewer than 30% of the people I asked were able to point to the community facilitator that Facebook is proving to be for me. Putting an event onto Facebook gets me more traction among my third level colleagues than any other mechanism. Using Facebook chat gives me more client-facing minutes than telephone conference calls or SMS text tag. Coalescing around themeatic content by creating groups, photosets or video collections just happens naturally. As Dominic McKenna writes in a comment to my blog, "Facebook has taken a whole new meaning for me since joining the Creative Multimedia Course in Tipperary Institute." He cites the connections he has discovered with upperclassmen and graduates. And he's noticed something I've never been able to orchestrate before. "If I'm not sure of an assignment, I can always pick someone's brain on Facebook and it's a great way to show my work and get some feedback on it." This feature alone distributes my teaching load and makes Facebook a welcome adjunct to my teaching resources.

Sent mail2blog from the upper saloon of the 67 winding towards Pearse Street, Dublin, Ireland.

That's a screenshot of my Facebook connections, scraped in late 2007.

CHRISTOPHER ALLEN'S tracing of social software still rings true today. He wrote a peer-reviewed online essay five years ago that I still use in third level classrooms while discussing blogging, microblogging, online collaboration and social networking. Allen's discussion meanders into spaces like including PLATO and groupware. He gives short shrift to bulletin board communities like Boards.ie and discounts the reach of the first generation of CompuServe users. I borrow Allen's timeline when reflecting on how I see online social networking evolving. 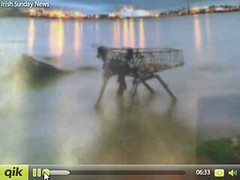 THERE'S SOMETHING APT about the screenshot at left, snapped in Aberdeen but reminiscent of the River Liffey in Dublin. In some ways, it looks like a post-Celtic Tiger shopping cart that many people push around in the shops near my home. Those carts aren't brimming with extravagance anymore because across Ireland, people are learning frugality at a time when things will definitely be sliced back. Some of that storyline emanates from the Sunday Times in Ireland as I make a Qik video of thoughts about the National Asset Management Agency, the generous expense payment system for politicians. After I put this Qik clip online, I noticed my Nokia E90 micbud were on its last legs so I post-produced the audio as a separate MP3 and threw away the earbuds. I wouldn't listen to either the Qik video clip or the MP3 clip, unless you turn down the volume. I'm uploading them here as bad practise.

Six Years Ago While Blogging in The Clarence

FEWER THAN 100 people in Ireland posted daily six years ago so when seven of them got together in the Octagon Bar of The Clarence Hotel, it offered an opportunity to compare notes on technologies that were stable, yet evolving. I shot some sucky photos with a Bluetooth camera. To this date, that old Concord camera is the only Bluetooth-connected piece of optics I've ever owned. As I rewind back to those Clarence Hotel discussions, I wonder if the topics we discussed would interest me today. We chatted about machine links (trackback), old typewriters, Radio Userland, Irish animation (pre-Brownbag success), new phones (no cameraphones), PR companies using too much print production, product launches happening after 9PM, and quad-band Motorola phones (before Moto left Swords and Cork). Half of the people who attended the 18 Oct 03 meet-up no longer blog. I often wonder if that kind of prediction could be projected onto the audience of the 2007 Irish Blog Awards in another four years. It's not that the 2003 or 2007 Irish bloggers think blogging isn't worthwhile. It's the existence of low-impact Twitter and tearaway Facebook is simply easier to use on a phone than blogging on a laptop.Photo of Karlin Lillington in The Clarence Hotel, 18 October 2003. 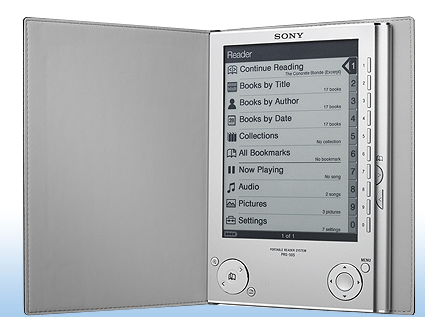 I HAVE AN OBLIGATION to ensure college students read books and that they immerse in the experience. I still believe real immersion happens with paper-based books (first generation textbooks). Even though I really enjoy the convenience and the practicality of a 3G wireless Sony eReader, there's something mentally immersive about holding a perfect bound spline and turning a paper page. And I'm not alone in my belief. 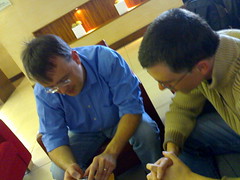 A FEW WEEKS AGO, James Corbett (at left in brown) mooted the idea of "outvesting" and today it's in the Business section of the Irish Times. "The Outvesting scheme is using Twitter to help gather €5000, asking 100 people to pledge €50 each to the cause," explains Ciara O'Brien. Two weeks into the idea, there's 5000 euro on the table. "Unlike investors, those who pledge their money expect nothing in return." James told attendees at Limerick OpenCoffee that the outvesting idea was inspired by the iQ Prize, which gives a no-strings-attached €10,000 to an entrepreneur with a good idea. This year, Robin Blandford's Decisions for Heroes web-based rescue team management and analytics software got the pot of money for further development. I hope the outvesting idea keeps on rolling because start-ups need funding channels to keep focused on getting their products ready for market. James Corbett announces outvesting and "over 100 pledges" received. 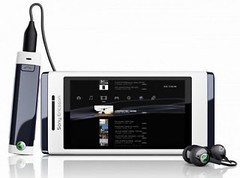 IF YOU HAVE A PLAYSTATION, you should look at the SonyEricsson Aino (at left) because it's part cameraphone, part Slingbox. It was designed from its baseband to serve multimedia in ways never seen in the marketplace. I watched it effortlessly connect from a hotel's wifi node to the internet and onto a Playstation located 10 miles away. Then the Aino control that Playstation and streamed content from the Playstation over the internet, onto the hotel wifi's node and onto the Aino. The Aino is like a Slingbox. If you're using a wifi connection that does not prohibit torrents, you can probably connect to a PS3 (or to a PC that's hooked to a PS3) and stream content from either device anywhere in the world. This is DLNA (Digital Living Network Alliance) at work, extending your sitting room and personal media collection across the globe.

WITH A WEEK of running with Google Wave, I can honestly say that I hope it doesn't integrate all of my life into one mash-up. Wave is useful with small teams seeking to accomplish clearly defined tasks. It's also good to help teams focus on getting things done. Wave can be pretty complex, when considering all its syntax and APIs. I think it's best used by people who have strong ties to each other or strong ties to the same project. Wave assumes symmetrical relationships in its focus on collaboration between small groups of people who have a common purpose. Over on Twitter, we have simplistic microblogging, powered by weak ties, asymmetric relationships and a conversational rather than social network. I think the two should stay apart.

FOR HALF A DAY, I answered questions from several hundred teens about higher education options. Most of the questions were well-informed. And while I answered questions about Tipperary Institute's multimedia curriculum, I discovered dozens of potential students already knew that Tipperary Institute had a presence on Facebook. In fact, the Facebook photos, videos, and short comments about classes were primary sources of information for some of the students asking questions about courses on offer. It's apparent to me that third level colleges and universities in Ireland should be using teenager-friendly communication tools like Facebook to attract candidates and to keep students. 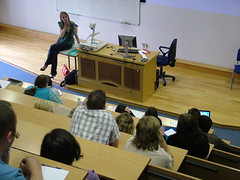 A FEW DAYS AGO, I was wrong to cite a figure of €100 million in relation to Tipperary Institute. I was wrong by a factor of 10. But I was not alone in my casual use of isolated financial data. The 9th Level aggregator picked up my incorrect figure and dropped it into the research folders of several reporters where it may be recited as an authoritative number when it actually lacks standing. I'm not alone in picking up on the 100 million euro number. It originated in the McCarthy report where the cost of education at Tipperary Institute is reported incorrectly. The financial analysts wrongly attribute an entire pot of money to education when a deeper analysis of the data shows the contribution made by the Irish Exchequer actually covers a wider swath of activities. Grainne Fuller in the Irish Times recited the €100m figure in the context of the McCarthy Report without disputing its accuracy but her article does offer further discussion about the reach of Tipperary's third level institution--a deep reach into Ireland's start-up ecosystem, community development programmes and well-established outreach in Ireland.