THE ANTI-COUNTERFEITING TRADE AGREEMENT (ACTA) is a one of the ultimate secrets negotiated between nations. According to a memo summary written from an oral discussion by European and US officials, ACTA now covers internet contraband. The problem is that ACTA has been drafted to avoid any sort of oversight so that means corporate liability of social sites like Flickr and YouTube is being defined without industry consultation. The worst parts of the US Digital Millenium Copyright Act are being rolled into ACTA without inputs from politicians, elected officials or company spokespeople. ACTA is a Trade Agreement. it does not have to pass the US Senate. Because itis being negotiated at EU level, no Irish politician has had a glimpse of it, even though ACTA will be imposed on digital delivery services in Ireland. It is a sad day when the internet is defined and regulated by lobbyists and bureaucrats. Danny O'Brien -- "Secret agreement may have poisonous effect on the net," in The Irish Times, 13 Nov 09. 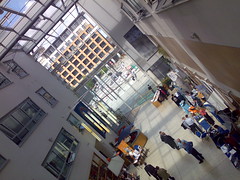 DAVID CONDE, a software developer from Tipperary Institute is part of a two-man team that won EUR 25,000 in the regional finals of Intertrade Ireland. David works with Adrian Skihill at Calom Technologies in the National College of Ireland's Business Incubation Centre, located to the right of the shot at left. Together they have won top honours in the Dublin Emerging Company Category of this year’s Intertrade Ireland Seedcorn Competition. Adrian Skehill, CEO of Calom Technologies and lecturer in Software Engineering and Distributed Systems at National College of Ireland, said: "Winning the Dublin Regional Final of the Seedcorn Competition has given us a great boost, not just the cash prize but also the feedback and input from some of Ireland's leading business people has been invaluable."

IT'S THURSDAY and I'm happy buying the print edition of the Guardian. I get the Guardian on Thursdays because of its standalone technology section. The section will cease publication at the end of the year and I'll be without a major source of trusted information. Perhaps the tech crew will continue publishing online with the Guardian but I'll miss their print presence. I prefer the Techonology Guardian in print format because I can scan the entire section faster when it's sitting under my bag of chips than I can see its content online. Besides, you can't put a bag of chips on top of a Kindle and count on soaking up the vinegar and cooking oil. The Technology Guardian taught me a lot about Irish innovation, through the words of Vic Keegan, Karlin Lillington, Charles Arthur and Tim Radford. In the mid-90s, I religiously read Computimes on Mondays and the Technology Guardian on Thursdays. I learned the tech landscape that way. Computimes wound down before Y2K. A decade later, the Technology Guardian has also let the stage.Jack Schofield's Tech Blog.

NORMALLY BERNIE GOLDBACH writes on this blog but I have his Nokia E90 phone and that means I have direct access to Typepad and to his Amazon account details. I'm Laura Hobson and I thought it would be good to inform readers what's happening in part of the afternoon during Media Writing with @topgold. We have discussed topical news, mainly the education grant system or the lack of it. We have also discussed the relevance of hash tags when writing mutimedia content, we are focusing on the creative hash tag and we will be trying to extract noises from our environment that could be associated with creativity over the coming weeks. I had better not write much more as Bernie is having withdrawal symptoms over the loss of his phone. 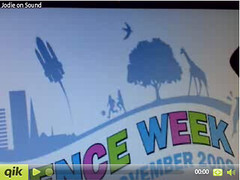 WE HOST MORE THAN 300 second level students in Tipperary Institute for Science Week Ireland this year. Our visitors will watch how to take apart a computer game and mash up new sounds, on-screen moves and images for the game. These are the kinds of tasks normally assessed in both the Games Development and Creative Multimedia curricula. I'm working on the sound desk with small teams of students each day, trying to get all the audio lined up. Jodie Bullivant worked as the lead audio engineer during the first day's activities and you can hear her commentary and see some of her work in the short video clips that we recorded with my Nokia E90 cameraphone. On Day 3 of the event, we're hooking the Tipperary Institute conference centre up to Online Meeting Rooms and running a screen into a primary school in Athy where we'll answer questions from students there.Direct link to short Flickr video: http://www.flickr.com/photos/topgold/4092081235/

AS MARK FULTON points out, you can use Ping.fm to update your LinkedIn status from Twitter. His idea is better than the new LinkedIn application because you can squelch the noise better with Ping.fm than you can with the LinkedIn application. Here's how you do it. First, sign up with Ping.fm. Second, create a group called something like #NotTwitter and let it ping everything but Twitter. Then create a group called #NotLinkedin that pings everything but Linkedin, and so on. Ping.fm is handy because you can selectively update all sorts of networks.

WORKING WITH YOUNG film makers gives me the opportunity to learn shortcuts. The biggest shortcut I've learned is trusting 14-16 year olds with caring for DV cameras because that trust has resulted in the camera operators telling me how they're able to record for up to six hours on a single battery. We've also learned there's value in making scratch work and we're doing that with the help of Qik.com. The singlemost important factor we've faced is weather. Today's shoot happened under clear skies and that's a problem because the earlier shoots were overcast. Ah sure, that's what post-production is for! We're also learning a lot about white balance and noise on the set. The biggest challenge is getting bit players to understand that their phones make electronic noises even when switched to silent mode. We have several more afternoon sessions left and it's going to be challenging because the closer it gets to December, the wetter most weekends turn out to be. On top of that, the daylight is getting really sparse as the year drags on.

The Kodak Zi8 (above) is the handheld DV camera we recommend for pocket video production. 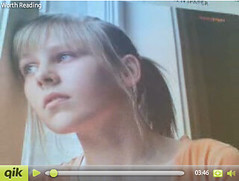 SEVERAL ITEMS IN THE Sunday Business Post hit home with me this week and I've made a five minute Qik clip to illustrate the point. Along the way, I hear the voice of Dean Whitbread reminding me that Sennheiser earbuds would improve my audio levels. On the front page sits Michael O'Leary with a plan to pocket an easy EUR 100 from every passenger who forgets to print a boarding card. This is happening at the same time other passenger carriers accept bar codes on phones as proof of purchase. Inside the paper, Richard Curren traces Ireland's current economic problems back to 2003 levels. Pat Leahy thinks, "We need a complete end to crowd-pleasing campaigns based on local issues and satisfying sectional interests." Amen, Brother. Meanwhile, in the Opinion section of the Irish Times, Dan O'Brien argues the problems go back to the 1937 Constitution and how Ireland is now a victim an undemocratic voting system coupled with unqualifed ministers who are members of the Oireachtas. Inside Agenda magazine, Catherine Cleary points to one of the side effects of Irish governance gone wrong. One could say that the current decrepit system is now imposing depression, fear and social stigma on children of the Irish recession. Adrian Weckler gives an excellent quarter-page review to Vodafone's new 360 operating system along with a cautionary note about buying a netbook. As I type this, I realise it's not really a good news week. So I'll stop right here and pack for my day in the woods with teenaged film makers. 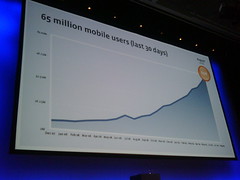 THE CONTINUED RESISTANCE of traditional managers in a wide cross-section of industries to ignore vibrant online social networking amazes me. At the highest levels of Irish government, the dismissive attitude comes close to incompetent public representation. Some managers, CEOs, and politicians don't think that hyper-connected snappy exchanges count in the matrix of public communications. In fact, they often want to use tax money to block, throttle or censor the avenues used by active citizens online. This is so wrong on some many levels. It's pig-ignorant and an example of professional misconduct to ignore active citizens who express themselves in online social networks.

Three years ago, when I first started poking around on Facebook and skimming through Twitterstreams, I heard the first snide comments about both of those social networks. Two years ago, when Tipperary Institute first started weaving social networking into an accredited creative multimedia degree, I had to defend my choice of networking tools (i.e., Twitter, Jaiku, Facebook, Flickr, Google Documents, Last.fm and Blip.fm) to students who were happy to live in a world of irregular e-mail. By mid-2009, only students older than 35 needed convincing about using community zones online. Most of them become avid members of online communities within a few weeks. Today, a third of new students check into their social networks on their phones.

Cracks in the Wall 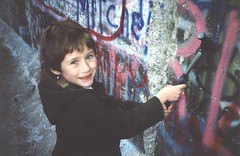 IN NOVEMBER 1989, I WORKED in a bunker filled with special phone lines that started ringing with message traffic about cracks in the Berlin Wall. By the 9th of November 1989, the border separating West Germany from East Germany was peeled back. In my work position, the wire traffic between the Department of State and American Embassy officials was more like a low-threat war exercise. If I had blogged about the events I would have lost my job. Twenty years ago to the day, the colonels and generals above me were more interested in articulating policy regarding ground transportation to Berlin and offering command guidance about the severe strain on accommodation that a widespread influx of Americans would create in Berlin. As soon as CNN started reporting the breach in the Wall, I asked for time off from the 23rd to the 27th of November. With the request honoured, I pushed off for Berlin with my family, including Kitty at left. We had a lovely time walking along the killing zone, eating French Onion soup at Checkpoint Charlie and returning home with chunks of the wall. A year later, I would discover that our departure from the West and travel to the East was monitored by US intelligence agents who were preparing a dossier for action. My journey to East Berlin would form part of a story that seems incredulous now but in the paranoid minds of counterintelligence, the way I traveled and the contacts I would form a body of evidence that would cause my world to come tumbling down.Berlin in my Flickr photostream.