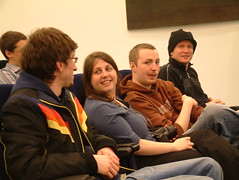 TWENTY GRADUATES of technology or teacher-training college couirses are to gain work placement positions in Microsoft Ireland to help develop digital material for primary and post-primary school curriculum. The graduates will work with the National Centre for Technology in Education. Their work supports the integration of ICT into teaching and learning. They will be employed under the Government's graduate back-to-work programme which allows them to retain their social welfare entitlements during the nine month placement. This news interests a large swath of our creative multimedia graduates (some pictured at right) because all of them have proven expertise in the production of e-learning material. Microsoft Ireland works with Ireland's Education Alliance. 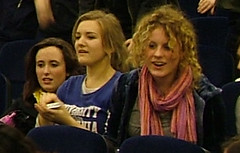 WHERE I WORK, there may be a strategy outlined by unions to "take the government out of power," if words of national organisers are believeable. The precocious attitude of that stance does not ring well with me, mainly because it will fly in the face of people (like those at left) who depend upon me for an education. So I'm not going to go forth with the beating drums, demanding that my wages be restored. In fact, I'm demanding nothing--not even job security on a campus that cost cutters have recommended closing. I've enjoyed a nice ride on the back of the Celtic Tiger, watching wages increase before I knew how to request a pay rise. I joined the Teachers Union of Ireland because it felt like a social club. That club was central to ever-ratcheting demands on wages and programme spending and Irish social partnership helped achieve those demands. Although fellow club members could see ways to enhance productivity or improve innovation, those kinds of proactive measures were never really part of overtures made to management. So I've left the TUI club. In today's environment, we better figure out ways to do more with less because unless we do, the next decade will be extremely harsh. I'm spending my time carving out portions of my time to ensure I can deliver more to students like those in the photo. I don't believe I'll achieve the same results by carrying a placard on the picket line. I'll leave that job to others who might be seeing something they can achieve through their rights to protest. 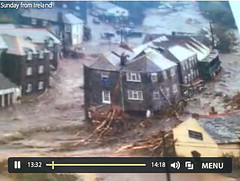 THIS WILL BE the last regular Sunday news report for 2009 because the final Sunday of the year is always a soft news day for business and technology in Ireland. For that reason, I recommend readers buy a copy of the 18 Dec 09 Economist and read all the Technology Quarterly inside. I bought three Sunday broadsheets today. The Sunday Times leads with "Judges defy call to pay pension tax." The Sunday Tribune gives seven columns across to "Adams' paedophile brogher was youth worker in Dundalk." The Sunday Business Post offers a recession-beating headline, "Bord Gais staff to get 3.5% pay rise." My 14-minute Qik clip today covers five main points. There are disturbing conversations emerging from the town of Listowel, on the heels of a serious sexual assault there. Dozens of stories concern the Irish recession, jobs for the unemployed, and I spotted several thoughts about using grants to return to education. Finally, I have a short comment about some tech gear that Adrian Weckler profiles in the Sunday Businss Post. 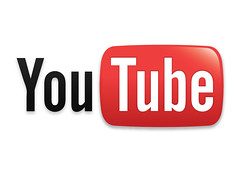 SHARING VIDEOS got a lot more sociable lately. New features make it a doddle to connect with the platforms like Twitter and Facebook. And if your address book is held online by GMail, you'll find even more people with videos worth sharing. Once you've subscribed to someone, you start seeing their public actions (i.e., things they "favorite", videos they rate and comments they make) in your Recent Activity module on your homepage (assuming these preferences are set). I'm watching Irish bloggers embed YouTube videos onto their blog posts instead of writing anything original. It's a normal part of sharing. You check into YouTube, let the "YouTube Zeitgeist" guide your mouse clicks and before you know it, you're viewing videos that are most relevant to you and to the times. Google knows what you like and uses algorithms matched up against your viewing history and complementing your subscribed channels. Now the algorithm will combine information from videos your friends embed on Facebook. YouTube has a greater reach than the Boob Tube. More than 46 years of YouTube videos are viewed every day on Facebook. No wonder some experts think the future of video journalism is on the small screen.Chris Testa -- "Facebook Feeds Begin Showing Up on YouTube's Homepage" on the YouTube Blog, 18 Dec 09. 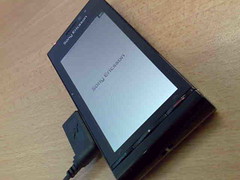 I WALKED INTO my local O2 shop, expecting to take home a free iPhone but left with a free SonyEricsson Satio instead. My wife swayed my decision when she pointed out that "free" with an iPhone meant an extra EUR 65 a month on a new contract but "free" with the Satio meant merely cashing in on a double platinum upgrade due to me. So we left the O2 shop with the phone unlocked for use on any telephone network. The first thing I did was plug it in for a charging--it must have been charged before because mains power gave the phone a green light within 40 minutes. Then I connected the Satio to my E90 and beamed a few things over (some music and an episode of Peppa Pig). Both played on the 30" TV screen in the office, using the TV-out cable that comes with the phone. I used the office wifi network to set up a session with For Immediate Release and I downloaded a few episodes for listening later. Google Latitude dropped right onto the phone, using O2's 3.5G network. Then Qik installed over the air. A few taps on the touchscreen and I updated my Facebook status. Then I locked up the phone because I had five applications running: media player, GPS, Latitude (a real hog), Qik, and Facebook (uploading a video). After one hour, I believe I've seen enough to recommend this phone to young and old alike.

Wrapping Up Another Semester 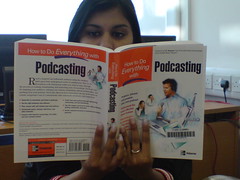 I JUST FINISHED MY ninth December in a third level classroom and this feels like the best one in my books. I know I failed to deliver a big chunk of hands-on material to my Project Management students but that shortfall is offset by some seriously engaging practical sessions with my first year students. On several occasions, those students produced highly-engaging audio podcasts of lectures. We used some of the techniques described in How to Do Everything With Podcasting, a book in the library by Shel Holtz and Neville Hobson. One of the frequent stars of our podcasts was Laura Hobson, a Brit just like the book's co-author. I've got more than a day's work ahead of me, grading papers and assessing project material. Through the magic of Typepad's cross-posting, I'll leave a few comments on my blog and they'll appear on Facebook where students will read between the lines.

Continue reading "Wrapping Up Another Semester" »

Handheld Learning Jumps Up a Notch 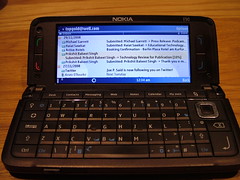 IN MY FACEBOOK CHANNEL, students are talking about the pleasure they get in touching their mobile screens. In my Google Docs channel, others talk about getting a rise out of technology that vibrates in their pockets. Both are handheld learning sweet spots that will extend my practise well beyond reading my Moodle mail on my Nokia E90 (at left). And with 3G services alongside free wifi on campus, things will definitely take off in my classroom next semester. Mobile learning will be the main focus of my delivery of learning content. Our over-the-air networks now support streaming of text, audio and videos. Students who can tap into three megabit per second broadband service at home know they can carry their academics with them, regardless of time and location. From evidence I see in referrer logs, I know students are using our online facilities as much after 8PM than they are during the normal academic day.

I hope that my work can form the basis of retooling some of our lifelong learning programes in Tipperary Institute. Higher bandwidths on both the O2 and Vodafone networks means I can stream rich media mobile content with 2D and 3D animations to mobile phones. For those on laptops, the faster data service means better real-time collaboration inside Google Documents. 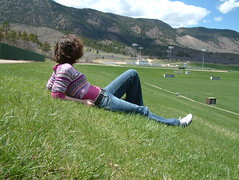 A FEW YEARS AGO, while looking out at the intramural practise fields of the USAF Academy with Ruth (at left), I wondered where some of my former roommates were. Within a year of snapping a set of photos from the Academy grounds, I'd connected with most of the 16 different men that I met before I snored. A lot of them were findable on Zoomie Nation, some on LinkedIn and a few on Facebook. Most of them follow ZoomieNews, an e-mail newsletter that covers the high points of careers. Sometimes the news would be tragic but until today, none of those news sources delivered details of a death of a roommate.

I knew Rick from age 18. Together, we helped win 72 intercollegiate forensics trophies in a single year. We did better against university debate teams than our football team did on the playing pitch. With impunity, we would miss up to 30% of our academic lectures while traveling west to California and east to New England. Rick was born with academic intelligence. He helped me through some very intense electronic engineering courses, even showing me how to assemble an oscilloscope. He also showed me how to expedite card punches during a foundation course in computer science. In the 70s, you needed card decks to make computers run. Rick's expertise allowed him to be detailed as part of the Mainframe's Fire Watch, where he figured out how to build a modem and how to display directories containing bank records and sensitive academic materials. We didn't talk about those inadvertent discoveries.

LAST THURSDAY, I noticed one of my E90 handsets was showing a 3G O2 signal around Clonmel where I work. This morning, I saw the signal in the upper left hand corner of the screenshot was occasionally flicking in and out of 3.5G strength. I put my O2 E90 next to my wife's Vodafone E90 and both of them showed strong 3G signals. That makes my data addiction all the more enjoyable because the faster downloads will allow me to make more Qik videos, download more podcasts and hop around on Foursquare with impunity. At EDGE speeds, I rarely used more than 500 MB of data on my phone every month, even though I posted mail-to-blog from my phone several times a week.

ALONG WITH SEVERAL lecturers in Tipperary Institute, I am looking at ways to expand course offerings, including a new Bachelor of Arts degree in creative multimedia. We've learned from three successful semesters running a new Bachelor of Science degree and now hope to roll those discoveries into an Arts degree with a focus on animation. As we push forward, I'm seeing reasons to lay down some markers for those who will approve this programme. I believe the most important consideration is to elevate the tools of the trade for fellow lecturers to validate and for the accreditors to appreciate. Two of the most important tools that we use to support students of animation and audio are open wifi and Dropbox, the online storage solution.