Bankers Without Money or Advice 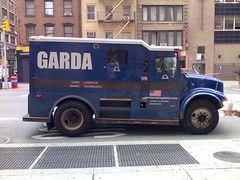 IT IS NOT HARD to find an Irish businessman who simply cannot roll through a bad patch by drawing on a line of credit from his local bank. Sometimes the process feels like a garda lock-up. What may surprise some people is learning that many Irish bankers are poor sources of advice about business matters. While working with three different Irish start-ups, I watched and listened to better advice coming from accountants and family members, not the local bankers. And not much has changed, according to Business Link in the UK. Business Link conducted a survey of high growth businesses and during the Delta Economics interview of 2,120 businesses, a league table of "useful sources of advice" emerged.

Profiessional advisers were the most widely used, both during the start up stage and later in the company's development. They were also ranked among the most useful, slightly behind family members, other entrepreneurs and mentos. 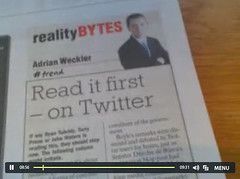 ALTHOUGH IT'S NOT HARD to find Irish journalists who sneer at Twitter, its effectiveness as a source of public opinion in Ireland reached a higher level this week when tweets helped push the Irish Minister for Defence from office. In his hard-hitting column this week, Adrian Weckler addresses the Moleskine-carrying old school and says "Twitter is now a must-have service". [1] Adrian is part of a cohort of journalists at the Sunday Business Post [2] [3] who sit at the vanguard of social media connectivity between the Sunday broadsheets and the Sunday readership. I reviewed the Sunday papers with my Nokia E90, reduced four newspapers to 10 minutes, and used my new Dell M2400 to slice the video into an audio file [7 MB MP3] that should play just by pressing the button below. Serious issues affect Ireland, involving ethics in government, a lethargy about entrepreneurship, and the deepening recession.

A SMALL FOLDER reminds me that I've had more than 20 job titles while in full-time employment during the past 34 years. I thought about that folder and one of the small photos (above left) inside it because I hope to resurrect photos in a "going to work" series. It's a bittersweet project because within 50 miles of my front door, more than 3000 Irish face long-term unemployment. That's because I live in an area affected by the closing of Dell's Irish factory operations. It's not difficult finding people with real issues related to their unemployment. The Irish economy hasn't actually bottomed out for many living on the lines connecting south Tipperary to east Limerick. And with no hope of using European Union money to attract factory jobs, it looks like the current recesson will marginalise more people than in the 80s because there are no bright strategies that promise to absorb the record-setting ranks of the long-term unemployed. These "new poor" are middle-class Irish who now rely on social welfare for the first time in their lives. 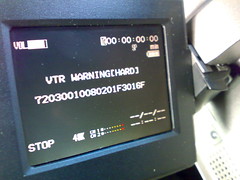 WITH SPRING SUNSHINE PROMISING to allow daffodils a chance to bloom, I'm back on the road with a team of 28 Irish teenagers trying to wrap up footage for a 51-minute horror film. The young people come from towns that lie within 15 miles of the eight west longitude line in counties Limerick and Tipperary. After eight previous occasions carrying recording gear through muddy pastures and deep into woodlands, I finally got a camera that failed to record. The error message on the screen (above left) points to a DV camera that should have maintenance but it also shows an error to be expected after several years of hard use. During the past five months, I've been impressed with the dedication behind the camera as well as the acting in front of it. We have learned a lot while filming. It will take another two months to bring all the footage into a proper production process, scavenging some gear along the way. I also hope that a few of the young people will consider the third level creative multimedia degree programme running in Tipperary Institute, the college that lies closest to the 8W line in Ireland.Some photos shot on location.

Did I Hurt You? 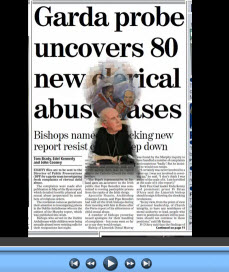 THE NIGHT ELEANOR McEVOY played Brazil's in Clonmel, I heard her backing track "Did I Hurt You" on a YouTube video about clerical sex abuse in Ireland. The track is on her Yola album and it fits the four and a half minute video. The YouTube clip contains snippets of newspaper reports, photos of the papal delegation, senior clerics in ecclesiastical positions of authority, young boys reduced to black and white shades inside industrial schools and remnants of growing up in Ireland in the middle of the 20th century. At least once a week, segments of major broadcast radio shows devote airtime to outrage by grown men and women who lived through experiences that deprived them of childhood pleasures. The end of the story is yet to finish because the Irish people demand an acknowledgement from the Roman Catholic hierarchy for turning a blind eye to abuses that were facilitated by benign neglect. That's a charitable excuse by myself, because some of the Irish religious hierarchy were in positions of authority where they should have noticed illegal activities. And if they didn't, they were complicit in facilitating worse than an abuse of trust. "Did I Hurt You" is a question all archbishops should ask their flock. And they should kneel and listen to the Irish public respond.

Did I Hurt You?

Eleanor McEvoy is at www.eleanormcevoy.com and Brennan1979 made the YouTube video. 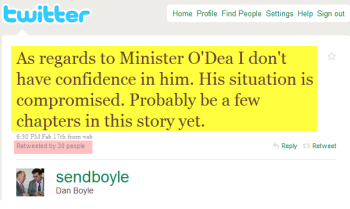 MINISTER FOR DEFENCE Willie O'Dea leaves the front bench of the Irish government tonight partly because of public interest fueled by Twitter. The Minister smeared an opposition candidate while being recorded by a local journalist. When the opposition candidate took the case to court, the Minister lied in an affadavit. When found out, the Minister paid damages and apologised. This meant a senior government official was rightly accused of perjury--yet the government of the day returned a vote of confidence in Minister O'Dea. And then the tweeting started. Senator Dan Boyle tweeted his misgivings about supporting a vote of confidence in the Irish Senate. Morning Ireland, a radio programme with more than 400,000 listeners, picked up the tweet and followed the story with new content every 25 minutes of the morning commute--while mentioning "Dan Boyle's tweet". Then the work day started and the heat kept pouring on with commentators citing politicians on Twitter or Facebook. Those sources were mentioned because that's where the politicians were muttering. I didn't hear a single blog mentioned as evidence of civic or political unrest.

BLUE SKY OVERHEAD helps take the bite out of 40F weather as I spend most of the daylight helping a Tipperary teen group film another segment of their horror film. Behind the camera, I'm asking young people about how they would frame their experience as film makers. I've worked with this group of fifth and sixth class students (young teens) for five months now, most of the time on location. The young people behind the cameras are focused on getting their segments in the can. Afte eight on-location shoots, they are also proving their perseverance. That's Cillian at left and if you click on him, you get to see three more of the crew. Qik clip sent from the Devil's Bit using O2-Ireland 3G service. 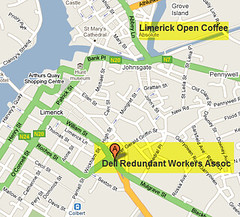 AT LAST WEEK'S two-day workshop in Limerick for ex-Dell workers, many of the 3,000 former employees failed to sign up for full-time courses because social welfare officers at the workshop advised that Irish unemployment benefits cease for those using EU funds to go back into full-time education. Labour MEP Alan Kelly said that he pointed out this social welfare issue to Government officials four months ago. The EU has given Ireland EUR 22.8m to help retrain Dell workers. The money must be spent by June 2011 or it reverts to Brussels. At this juncture, "very few took up courses they wanted in colleges in Limerick, Tipperary and Cork," according to a statement given by Mr Kelly to the Examiner's Europe correspondent. This kind of news concerns me because I've been inside the Dell Redundant Workers' Association offices (see pinpoint A at right) and know the hesitation many of them have in balancing their budgets with little prospect of full-time factory work in the near future.Ann Cahill -- "Dell workers may opt to refuse EU payouts" in the Regional News section of the Irish Examiner, 16 Feb 10. 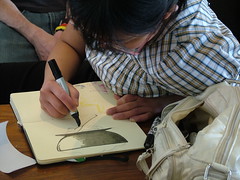 WHILE ON A SHORT BREAK, my attention is drawn to art supplies. A two-year-old (not Wannita at right) has discovered a cache of new instruments and for posterity's sake, I'm documenting the total complement of her Doodling Kit. She prefers Moleskine water colour journals, Fabriano Artist Journals, Ingris paper, Canson paper, Arches watercolour paper over the unlined journalist's notebooks. She likes nice pens (Pilot G-tec C4, Pilot Hi tec C, and Faber Castell Pitt Artist Pens). She is most emotive with mashable media (Prismacolor Pencil Crayons, Van Dyke Pastellkreiden and Kroma Artist Quality Acrylic) although she has fine tactile control with Windsor and Newton Watercolours.