SOCIAL SEARCH GOT smarter with Google acquiring Vark. I am a friend of Vark because I want person, not FAQs, to answer my questions. I'm the same way around tech support for hosting because I'd rather open a support ticket and await a comprehensive resply instead of drilling around aimlessly online when faced with a complex problem. Vark is a system I use on Twitter and inside Google chat. I can ask Vark questions via chat and not expose my ignorance to the Twitterverse. I keep my Google chat box open all the time when online and normally answer queries from around the world on 20 different topics. Aardvark is intelligent. It can match people with expertise to people with questions. I normally get answers within 20 minutes to questions I ask Vark. I get faster answers between 1400-2300 in Ireland. Some of my friends use Aardvark on iPhones as an app, via IM or by old school email. Time Magazine cited Vark as one of the 50 Best Websites of 2009 and it has featured in the Crunchies.Damon Horowitz -- "The Anatomy of a Large-Scale Social Search Engine" 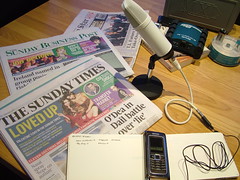 THE BOTTOM-SCRAPING Irish economy forms thematic content for several two-page spreads in today's Sunday broadsheets and things have become more sinister with the prospect of default on sovereign debt by Greece. [1] If Greece needs a eurozone bail-out, European Central Bank interest rates will certainly increase, putting further strain on the Irish economy. The CESifo group releases a damning report about Greece, Ireland, Italy, Spain, and Portugal this month. The Stability and Growth Pact has failed. No matter which analyst looks at the issue, nobody thinks the Irish recession will recede in 2010. This is starting to look like a four-year recovery, even from the perspective of the idealistic "Your Country Your Call". From my seat at the coal face of educating clever and creative people, I think there's hope in small. For example, Gavin Burke is a Galway software developer who is "earning up to $100 a day from sales of an iPhone application." [3] The Sunday Business Post, a cheerleader for start-ups, throws the spotlight on Entrepreneurship, innovation and creativity today. Although I'm with Ian Kehoe [4] and I believe in the power of start-ups, there are several hundred ex-factory workers living within 60 miles of my home and they're not cut out for the job of running their own businesses. Many of those unemployed Dell workers live in the constituency of Willie O'Dea, the government minister caught for perjury. [7]

ONE OF THE BY-PRODUCTS of transferring work from one laptop to another is realising the amount of digital archiving that's needed in my life. All sorts of geolocation data, like the screenshot of free wifi nodes at left, make my daily life more productive but I don't have a productive work flow to keep things tidy. I've thousands of audio files, gigabytes of video files and nearly a terabyte of still images that I've collected since I first started carrying a cameraphone in 2002. The phone is just one part of the challenge. I've Acrobat documents, legacy XML material from four personal laptops, a suitcase of 3.5" floppies and a small box of 5 1/4" floppies that mark my time on a personal computer back in the early 80s. I don't want to invoke a grandiose policy on archiving my digital life but I'm very uncomfortable about the level of benign neglect that's become my digital archiving policy. I don't want to reach retirement age and discover my life has been one big exercise in digital amnesia.

IT TAKES 62 MINUTES to travel from Shannon Airport to my front door but I know fewer people are on that route since half of Shannon's 2008's trans-Atlantic traffic no longer lands there. Three years ago, before Ireland's bubble burst, you could mark the end of ther American school year by the number of coaches on the N74 under my sitting room window. I watched the demise of Shannon bus travel last summer and knew what that was doing to the local shops and Tipperary restaurants. It's a lot easier digging yourself out of a recession when international visitors pay their ways through your cash tills. If anything deserves a writedown by the Irish government, it's the Shannon landing fee structure. Zero that out and watch the immediate positive bounce in Limerick, Tipperary and Clare. If the Irish government did that, Michael O'Leary might become an unexpected cheerleader. 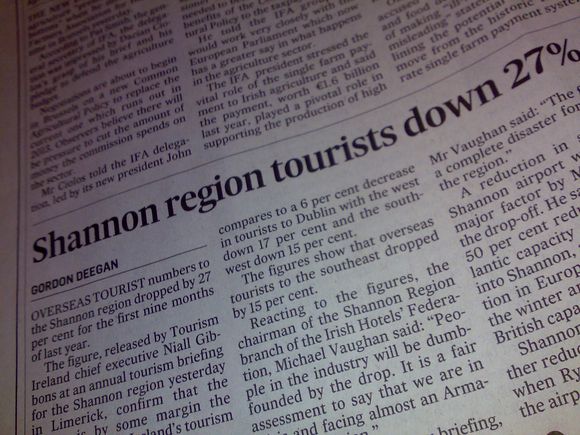 My First Day on Buzz 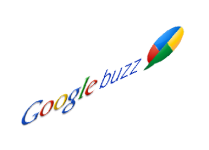 MY GRANDMOTHER WAS AN EARLY adopter because she had one of the first telephones on her street. She wasn't allowed to use the phone because it was all chatter (a party line) and she couldn't ring anybody outside the local exchange. By the time she turned a teenager in 1916, the home phone could connect to all of Pennsylvania and by the end of the Great War, she could ring nearly every other Irish illegal on the east coast of the US. Nana put a long bet onto telephones when she was my age. She actually thought you would be able to take phones outside and in the car--and use them to call people back in Ireland. She thought phones could become intercoms. She was right. And after using Google Buzz for a work day, I think my grandmother's perspective applies to electronic social communications today.

Google Names a Product after my Grandfather 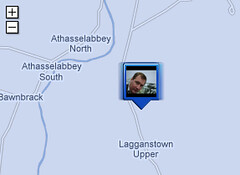 BUZZ GOLDBACH DIED 27 years ago next month so it's nice to see that Google has named its latest product (Google Buzz) after him. I've seen functional parts of this Gmail-integrated social networking utility already because I've used Google Latitude for more than a year (screenshot of my current Latitude in County Tipperary), Friendfeed before Gmail and the Jaiku mobile client since early 2007. (I found superb restaurants in Copenhagen using Buzz-like features.) Functionality from these three properties roll into Google Buzz. You need an apps-friendly phone (i.e., iPhone or Android) in order to mash up location info with short updates from people who like to leave throwaway remarks when they're out and about. I don't know how much of a demand exists for this service among mainstream mobile users who run below the tip of the early adopter iceberg. Specifically, you need to have a gadget craving to experience Google Buzz in your hand because you must have a high-end convergent phone. You won't get Google Buzz with 70% of the phones in current use but you might see it running inside Gmail if you're connected to people who use it as well.

Continue reading "Google Names a Product after my Grandfather" »

Working Within a Group 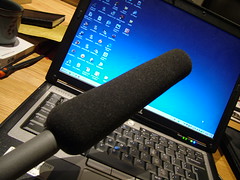 A GUEST POST from the Tipperary Institute project management Skunkworks.

Several things become very obvious when working within a group. On one hand, there are things you expected along with things you did not. Things you thought you knew quickly become things you don't know. On the other hand you can find a subject you like and become quite good at it. As a mature student in a creative multimedia project group, I mingle with men and women of mixed ages and differing backgrounds. Most of us are mature students and we find it can be difficult to touch base outside of the classroom. We have, however, achieved several important initial goals by using a number of tools. Our success goes beyond diligently managing our e-mail. We attribute part of our success to Skype. Free online conference calls through Skype have proven invaluable to us. Skype is free, easy to use, and can be done from the comfort of your own home. Google Talk and Google Groups have both been useful too. The great thing about these forms of communication is that if you use text it will save it for you and you have your transcript ready to drop into your weekly or monthly diaries.

Continue reading "Working Within a Group" » 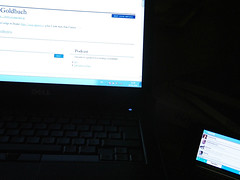 I'VE A NEW DELL M2400 LAPTOP running side-by-side a Dell D620 and realise it will take several days to pull all my required programs onto the rippingly-fast Dell Precision laptop. Part of its speed is down to Windows 7. Most of its speed comes from being free of bloat. Besides Microsoft Office and Visual Studio 2005, I've just the basic Windows accessories. I'll be intested in discovering what legacy programs and shell extensions fail to install. Because I want rocket speed to complement the Firewire services that will connect to this lightweight baby, I'm going to use a clever mouse with this laptop. Here's the first hour's tick-off list of programs installed on the new laptop:

SOME CALL THEM "Zombie Hotels" but I like to think of them as quiet and inexpensive four-star beds. You can get a room in the Burlington in Dublin for €79 without breakfast. You can stay in the Berkeley Court for €69 or move up to a junior suiterfor €119 and get ample room plus breakfast with your mid-week booking. The D4 at €50 a night is less than you might pay up for dinner and drinks up the street. As long as builders have to keep their hotels ticking over to earn out their tax breaks, these rock-bottom prices will deflate hotel revenues across Ireland.Ann Marie Hourihane -- "Inside the empty world of Ireland's zombie hotels" in the Opinion section of The Irish Times, 8 Feb 10.

BY FOLLOWING PEOPLE on Foursquare, you can get ideas about where people hang out. An hour before Edelman's Trust Barometer hit the streets, a half dozen people were checked into the Westbury Hotel. That caught my eye at 9AM. During Dublin's Web Summit, four or five people checked into several nightclubs, making it easy to bump into friends. But would you want to let people know you're at the local Spar? Adrian Weckler doesn't think that's smart--but he's not familiar with my local newsagent. If I show Tommy at Costcutter's proof of my check-in, he returns the favour with a deep discount of croissants and we're both happy. And if I'm walking NYC, I check into my first bagel bakery because that alerts me to coffee promotions up the street. Foursquare's serious gaming philosophy encourages people to collect meaningless badges and to ratchet up the leaderboard with weekly point totals. In pursuit of those points, I know there must be some Drive-by Foursquaring because some people spend less than five minutes in new venues they have created themselves. I've tried spoofing Foursquare myself and understand its basic anti-driveby algorithm. But if you script and publish your virtual footfall, you can easily rack up more than 1200 points a week without leaving home. It's that kind of behaviour that deserves Adrian's attention, not the simple act of letting people know where you board your train or buy your lunch. Driveby Foursquare tactics make me wonder about friends with too much time on their hands. They're abusing my rabbit hole and they're polluting the Twitter timeline with babble worse than the hackneyed "NN" phrases that have become the sweet nothings of online citizenry.
Sent mail2bloig using O2-3G Typepad services while Foursquaring Clonmel's Vet Clinic.

Adrian Weckler -- "Get lost with these location updates" in the Sunday Business Post, 7 Feb 10.