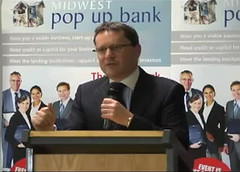 GEORGE LEE OPENED the Pop-Up Bank in Limerick's Thomond Park, welcoming 135 people in the crowd to a venue filled with bankers, start-up counselors and support agencies. Unfortunately, no inside track to express loan service was offered for entrepreneurs in search of critical funding required to push along ideas to market. That's the greatest disappointment I heard from several attendees. While the pop-up bank may be a one-time event, regular meet-ups of Limerick OpenCoffee in the Absolute Hotel often help young businesses connect good ideas together for best effect.

ANOTHER YEAR ROLLS BY and I'm missing Manhattanhenge yet again. It's a unique urban phenomenon in New York City. The skyscrapers that line the gridded streets of NYC's tallest boroughs normally block the setting sun. Clever photographers know that on the 30th of May and 12th of July this year, a radiant glow of light will simultaneously illuminate both the north and south sides of every cross street throughout Manhattan. The American Museum of Natural History's Neil deGrasse Tyson has asked, "What will future civilizations think of Manhattan Island when they dig it up and find a carefully laid out network of streets and avenues? Surely the grid would be presumed to have astronomical significance..." especially when the sun aligns in perfectly with the city's street grid. That's Neil's photo attached to the blog post. I want to snap one just like it before the end of the decade. MEMORIAL DAY RESONATES with me, especially since I haven't observed the last Monday in May as a holiday in the States since the mid-80s. I grew up knowing it as the day we listened to the Indy 500, evolved to thinking of those who have served in uniform, and spent most of my working life considering how I wanted my burgers cooked on the charcoal grill outside. Memorial Day passes without a Bank Holiday in Ireland, so its significance is etched in my mind as a result of working alongside men and women who are now permanently scarred from incidents they survived in the United States military. And I'm also reminded of the service of Easy Company, memories from history books and The Band of Brothers. It surprises me when I meet creative people in Ireland who also identify with the storyline and the inherent sacrifice running throughout that HBO mini-series. And it's refreshing to know that I'm not seen as a war monger when I play scenes from that production in several creative multimedia modules I teach at third level. Some of those scenes, and the image of Dick Winters that hangs on this blog post, sparked the comments I left on an Audioboo clip below. 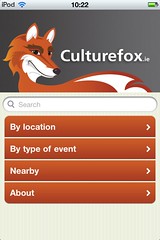 AS MUCH AS I like the convenience of in-hand mobile phone apps, I resent tax money being used to slot tax-funded content into silos that sit out of sight of each other. That's what the well-engineered Culturefox seems to do on my iPod Touch. I can see events that the Arts Council has funded when I give the iPod Touch permission to access the network but I have to use the information in-app only. Culturefox uses A-GPS to determine what's closest to me but since my device always connects to a Limerick server when I'm on most streets, the distances depicted are normally wrong. What's more wrong is that the app does not appear to grab content from local arts officers--which means the entire county of Limerick is ignored. According to the "About" section, Fusio put the application together. "The app is part of a joint initiative, which cost EUR 80,000," according to Niall Toner in the Sunday Times. The Arts Council has written to organisations it funds alerting them to Culturefox. Toneer says "all organisations, arts groups and promoters will be invited to list events." I would welcome the data being shared via RSS and API anod not restricted under its terms and conditions from being scraped by aggregators.

LIVING IN IRELAND, I miss the Memorial Day extended weekend so I picked up two Sunday broadsheets and give my American perspective to the Irish news. There's an undercurrent of the State wanting to control a lot more of the way we communicate through social media. And the Obama Bounce is positively affecting the current Irish government. There's more in the YouTube clip, including a Gabriel Byrne's take on Jedward.

My 100th Most Viewed Photo 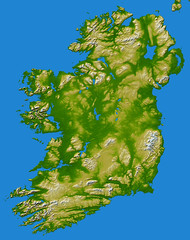 REMINISCING TAKES ME into my personal archives once a week and part of that meandering uncovered the hundredth most-viewed image I have on Flickr. It's actually a shot of Ireland taken by the NASA Earth Observatory (hat tip to James Corbett) and two things are surprising about the image and the business intelligence about the views on my photostream at Flickr.com/photos/irisheyes. First, it's got fewer views than dozens of shots I've taken of Irish drivers doing stupid things. Second, it will remain thousands of views behind shots of gadgets because Flickr referrers prove that that people come looking for images of objects. They come from Google, Bing, and Yahoo! And they come in blocks of hundreds per week. I'll tuck the aerial view of Ireland away for Radio Kate, the woman in Audioboo Headquarters who hopes to get my Flickr view of Ireland while orbiting the earth.

Image from the NASA Earth Observatory. My most-viewed image on Flickr is Sam the ugliest dog with 128,000 views. I didn't snap that shot. It has attracted the most comments of any shot I have on Flickr. The most popular image I shot for Flickr is a tampon chandelier with 80,114 views.

When You Are the Brand 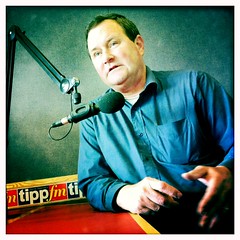 ONE OF THE MOST INTERESTING facets of the amalgamation of Tipperary Institute into the Limerick Institute of Technology for me is the realisation that sometimes the profile of the people is as strong as the brand of the institution. In our case, working out of South Tipperary, there's a Tipperary Institute brand that will fold into one of the schools of LIT. Over time, some observers think "Tipperary" will become subordinate to "Limerick" as the transition takes hold. And while that is a risk, it's offset by the people in the process because along the way, the lecturers and the staff of the Tipperary Institute are the brand more than the name of the college itself. Several staff members in Limerick have told me that they have learned accurate things about the happenings inside Tipperary Institute by reading Inside View, my nine-year-old blog. I've made some factual or perceptive errors on my blog, been called to task for them, and corrected the blog where required. I've also written some things that are more a result of canteen chats than staff meeting minutes. And all through the 11 years I've been teaching in Tipp, nobody has throttled my writing. I think that's healthy.

Continue reading "When You Are the Brand" »

I'M EXPERIMENTING WITH "Table of contents & Search" in Camtasia Studio. It's as though Camtasia can make enhanced podcasts by using PowerPoint as the intermediate step. It's rather straightforward and means viewers can skip to the video section they need to watch with Camtasia Studio’s smart Table of Contents feature. I record a PowerPoint presentation as normal, and Camtasia Studio uses my slide titles to create the table of contents automatically. This will make my summertime revision schedule more interesting. 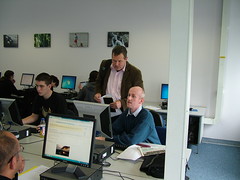 EVERY SINGLE WEEK, specific job offers for creative multimedia graduates arrive in my email. That's great news for students currently completing degrees in Tipperary Institute and those job offers prove that creative jobs are in the pipeline and increasing in their rate of occurrence. To be ready for those new opportunities, people need certification of skills. Taking time out to earn a degree in four years is too great a leap for a wide cross-section of potential applicants so along with several other programme developers, I am looking at developing certificates in specific parts of our curriculum. There's always local interest in digital photography. Business video production is a niche market as well. But I think our first short certificate course will be one in Social Media and Web Analytics. It will combine elements of existing Level 6 modules in Social Media, Public Relations, Marketing, and Web Analytics. The programme will revolve around workbooks containing tutorial-style content and leverage Moodle, our Learning Sandbox. As a bonus, collaborative tools and small group training will provide participants with dynamic feedback and encouragement throughout.

GABRIEL BYRNE DISSECTS President Obama's visit to College Green, offers a compelling perspective on the role of art and culture in Ireland, and gives an excellent impression of Jedward on the Late Late show on RTE One in Ireland. It's essential viewing.