An American Take of Sunday News

THIS WAS PROBABLY the most amazing week for news from Ireland, mainly because of a totally successful visit by the Queen of England, the death of Garret Fitzgerald and a massive Heineken Cup Final win by Leinster Rugby. I bought six different broadsheets today and those three stories resonate through most of them. The Sunday Times cites the Queen's "majestic" visit on the front page and photo essays of Queen Elizabeth's highly engaging walkabout in Cork get half page coverage in the paper and across all major media outlets in Europe. It's an image that suggests Ireland is safe from terrorism, that she enjoyed herself immensely and that Ireland is now very affordable. 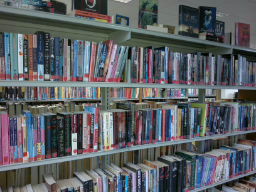 AS A YOUNG teen, I spent a lot of time in our local library. The only problem with it was its location nearly eight miles away.

We can walk to the Cashel library but we don't do it often enough. Today I brought Mia in for storytelling and I immediately went back into the zone of exploration that I once knew before I turned 14. The bookshelves here appeal to people under six feet tall because they're shorter than that and that means a young teen would be able to see through or over the stacks. That's how I discovered countless new worlds. But that was last century. In this century, the library has free wifi, plenty of high-speed computers and a patient staff that often walks around making sure everything is alright. From the looks of the content on several computer screens, it appears our local library opens its range of content beyond that seen by the local county council. On one hand, that's refreshing. On the other hand, it means the computers are more likely to be used for recreational purposes and not for discovery or creation. And while the recreation runs full bore with whispered comments and laughs out loud, the books go unopened and the stacks unexplored.

[Sent by Bernie Goldbach, creative media lecturer from the Limerick Institute of Technology, via free wifi on a Nokia E7 at the Cashel Library.]

When The Queen Landed Out Front

QUEEN ELIZABETH II LANDED in the Hore Abbey pasture, an historic event on so many levels. Unfortunately for us locals, we were kept hundreds of meters away from her walkabout. On the day of her arrival, I tried to walk the Path of the Dead, something I do many days as a local resident but as my short YouTube clip shows, I didn't have the credentials. I could tell from the positioning of men in windows looking out from the highest vantage points that had I approached Hore Abbey from a familiar western pasture, a field encampment of Army soldiers would have stopped me at their perimeter. The Queen was inaccessible in Cashel and that was a big contrast to how things went in Cork. International newsreels presented her drop-in visit to Cashel against an historic monument with no indication that a charming little town lay empty and waiting a short walk downhill from the Rock of Cashel. In my mind, the Queen's visit was a missed opportunity for the local area and that's unfortunate yet predictable in light of the exceptional layers of security afforded her visit. I hope she comes again, perhaps using one of the dozens of tips I've annotated for her review in Foursquare venues in Cashel.

I REALISED THAT I am starting to monitor my monthly mobile data usage and that my behaviour could indicate a trend. On my Nokia E7, my data usage is around 500 MB down and 400 MB upstream every 30 days. On my Huawei E585 Mifi dongle (shown snuggling next to my coffee cup), I normally use less than 250 MB per month while sharing with up to four other people simultaneously. Even power users like Christian Payne rarely push the Mifi account above 250 MB a week. Recent conversations caused me to realise my open and unlocked dongle (SSID Bern-ie) is unique. I've heard people with iPhones say things like, "Hey, I'm connected to Bernie" as they hit the mobile web at speeds faster than their phones normally serve them. I'm effectively extending my personal area network to entire train carriages, coaches of tourists and happy pub customers. This is a relatively new side effect of my O2 contract and I'm happy to oblige as long as my monthly costs remain less than EUR 100 for both SIMs running for most of the work day. The world needs more people to share their personal area networks.

EDITOR'S NOTE: We interrupt the Queen's Visit for an important video announcement from Limerick. I'd appreciate readers taking time to view and comment on the video work below because crowd-sourced comments are part of an assessment in a Level 6 web Promotion for Business course. Here's Brian O'Connell:

We are part time students through the Limerick Institute of Technology and the Tipperary Institute. Here is a video that we made for Web Promotion For Business egfdell. Its is aimed at a tourist, showing some of the many attractions that Limerick has to offer. Please let us know what you think of it.

This is our first time recording and editing a video so it is all very new to us and any comments would be appreciated. 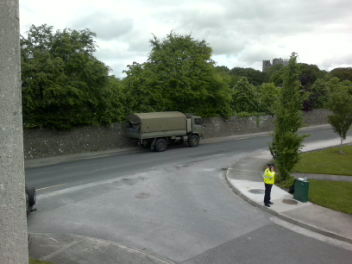 ONE OF THE ADVANTAGES of living on a national road next to a major landmark is whenever something big happens, we're right there near ground zero. The Queen of England is tearing around Cashel and that would normally bring a lot of local things to a standstill but not for true locals. We're like Free Range Hens with chicken feed scattered in the middle of the streets. So I'm off to see how far I can poke my camera, perhaps starting with the back of the Army trucks parked in front of our house. 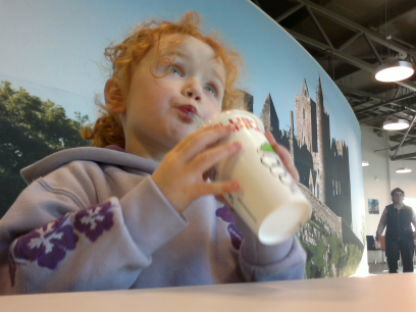 FOR MORE THAN a year, we watched crews build a slip road, a petrol station and then a McDonald's restaurant at Exit 8 on Ireland's M8. Today, along with food critic Mia Goldbach (pictured), I went to the first day's service in McDonald's and left disappointed. The place is too small for a full coach of hungry hurlers, the parking lots too cramped for a small convoy of HGVs and the parking flow too tight to prevent collisions in the fog of late night driving. This is the only 24-hour Tankstelle on Ireland's M8 and it is smaller than a Texaco star footprint on US Route 50. I am disappointed but not so much as my daughter who really wanted a first day's milkshake. But there are positive observations. 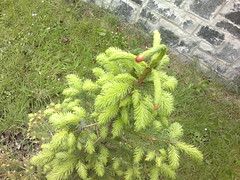 THREE YEARS HAVE elapsed since our first semesterised intake of creative multimedia students at Tipperary Institute and it's growing as a quality course. Around the launch of that programme, we bought a little knee-high tree and used it for Christmas. We transplanted the tree and for one hard winter and most of the summer, nothing happened. Then it started growing in spurts. Now it's time to clip some of the brown needles and to feed its roots. We want it to get a wider diameter and that means following a certain strategy. In my working world, I'm adjusting some of the growth patterns of our creative multimedia degree. We're pruning some objectives, articulating others and developing some new modules that will give the creative multimedia degree a stronger spread of skill sets in graduates. The meandering continues in another programmatic review today. 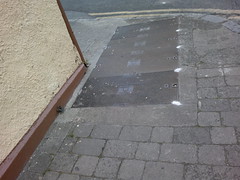 ALL AROUND CASHEL where I live, the town is being cleaned up several times every day. Tonight, all the old cars were taken out of Irishtown, making the back road to the Rock of Cashel totally accessible to the convoy of Queen Elizabeth II. She won't see the well-washed storefronts of the town if she arrives via the shortest route from the most profitable stables in the area. But should her entourage meander through the centre of the town, dozens of shopkeepers will be happy to get a fleeting glimpse of her or her Landrover. As I say in my attached Audioboo, Princess Mia just wants to meet a real queen. That might be tough because at the moment, Mia is due to be in the creche upon the Queen's arrival.

Sent mail2blog in Cashel from my Nokia E7.

MOST MORNINGS our kitchen table has some remnant that proves the kitchen is part artist's studio. This morning, as I put away Mia's colouring sets, I decided to talk about what it means to watch an emerging artist craft her work. It's quite remarkabke to see the personal development of a little person as she experiments with colour pencil, watercolour pigments, and graphite on sponge. I think she gets some of this creative playfulness from her mom the animator. She also has learned to appreciate art-making in her Play and Learn creche from one kind woman, a mom a generation older than Mia, who knows how to teach via art. This is a story that will continue to pique my interest.