Inside View: Writing for Social Layers 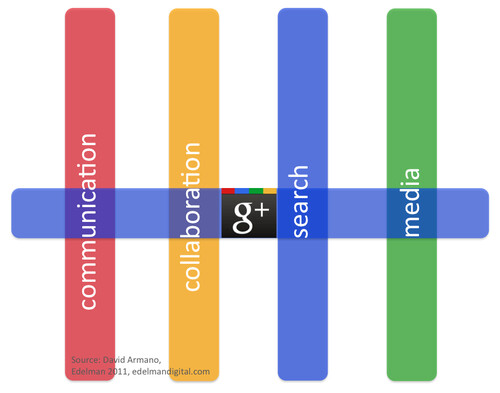 Finding Elements of the Social Layer.

Google Plus looks like a social network and feels like a social network but it takes more effort than Twitter and it's more high brow than Facebook. However, I don't think those differences concern Google because of how G+ fits into a social layer across the entire Google ecosystem. Although I enjoy the user experience, I've hundreds of friends on Twitter who don't see the point because in their minds, G+ solves no problem. Plus, a lot of my friends have the social experience they want inside Twitter and Facebook already. They don't have time for yet another social network. And they don't appreciate the layers of social connectivity that are inherent with Google Plus.

The college students in my modules won't leave Facebook and abandon their friends inside Facebook groups. The small companies I advise won't close up their Facebook pages and try to pull their fans into Google Plus. Foursquare power users aren't going to stop checking into places and earning badges. And managers can't stop using their e-mail clients. None of these changes in online behaviour has happened during the short two months I've played around inside Google Plus. However, once G+ starts to affect search engine placement, the other  networks will recognise its influence. And when managers start running with the Chrome extension for G+ they'll start seeing a red number in the upper right hand corner to advise them of activity inside Google Plus. If you use services like Gmail, Google Docs and Picasa, Google Plus will appear on the same functional toolbar. Once managers discover they can reach subordinates faster and more efficiently with the Google suite of services, I think I will discover more of the C-Suite inside the Google Plus ecosystem.

The Acceleration of Sharing

Over the past 10 years, it has become much easier to share things on the web. You can grab links from all sorts of places and drop them into Facebook or Twitter for sharing. But Google+ recognises photos, links, YouTube videos, and other items. You drag them into the sharing panel and they're often displayed inline, complete with their original URL. There's no shortening of the source and that will prove very interesting to people who want to push out their stuff as an enticement for others to visit the main site. I drag a lot of items into the Share box on a black Google toolbar that runs inside my Chrome browser. I've become a truly lazy content maker.

Photos present themselves elegantly in G+ with a black backdrop and easy sharing or deletion options. These are large photos and not thumbnails. Google also threw in a few of the most helpful photo filters and editing tools. Click the Actions button just underneath a photo, and you’ll get rotation tools — and more important, Edit Photo. A right-hand sidebar pops up with some Instagram-like filters: cross-process, Orton, and black-and-white. There’s auto-color and auto-contrast and the ever-helpful I’m Feeling Lucky button, which helps non-photo-nerds by applying the most common light and color corrections to your shots.

Photos also upload quickly behind the scenes if you enable Instant Upload. Everything I shoot quickly syncs to a private album in Google Plus. From there, it’s just one click to sharing the photo. This automatic photo syncing has increased my sharing of images and decreased my community activity on Flickr. I'm editing more images that automatically upload to G+ and managing those images inside Picasa Web. If my usage continues, I'll have much more on Picasa Web before the end of the year.

I hadn't expected to see photos differently through G+ but its photo interface seems to be designed for quick picks, flipping and sharing. I really really like how I can flip through photos with my mouse wheel. This looks superb when I view activity inside my Photography Circle.

Group video Hangouts inside Google+ are dead simple. Hangouts are like group Skype chats but they are powered by Google servers offering a single-focus video window. It is handy being able to bring nine students into a Hangout to see the same YouTube video at once, watching it in real time and commenting on specific moments (in text or by talking). Google is helping me blend my education collateral together.

Google+ has built-in list of keyboard shortcuts that help me quickly flick through stream items, start a new post, and navigate around Google properties without reaching for my mouse or moving my fingers onto my laptop's trackpad. I also like using both Google+ Manager for Firefox and Goo Plus Manager in Chrome.

Critiquing those in the Broadcast Mode.

Facebook knows it has a weak pull with journalists and media professionals. On television screens viewed in Ireland, tweets appear as audience comments and after-show continuity. In fact, producers know they can get a bounce in viewers or listeners with well-orchestrated tweets throughout the broadcast of a scheduled broadcast event. I think it's just a matter of time before a Google Hangout features in a broadcast originating in Ireland. When that happens, the limitations of Twitter are well and truly exposed.

Updates, revisions and edits also provide a compelling use case when comparing G+ to Twitter and Facebook. Only G+ lets you clean up your words or remove photos. On other systems you must delete entire post. Sometimes this means killing the comment string as well. With G+ you get a  little arrow in the upper-right corner of all your posts that drops down to offer editing and full control of the kinds of comment flow you want on your post. You can strike out comments, turn off comments and delete your posts.

Understanding the essence of Brand Ambassadorship.

I really like talking in Circles. It's something baked into the beta version of G+ where I can select groups of people and then engage only with those people. A brand manager could do the same thing by setting up a G+ Circle to communicate directly to customers. For example, a community manager who wants to communicate best content to high value members can customise the message flow to different Circles. I'm doing that with different cohorts of third level students via Circles and custom-tailored newsfeeds called Sparks.

These are early days for Google Plus and the first week for my new students to start developing sophisticated online profiles. I hope they find and share this blog post.

Image above and inspiration throughout from http://darmano.typepad.com/logic_emotion/2011/07/google_plus2.html

Kevin Purdy -- "Ten Small but Brilliant Things about Google Plus" on the TechRepublic Blog, July 28, 2011.

I am http://gplus.to/topgold on Google Plus.

Posted at 12:50 PM in Innovation | Permalink