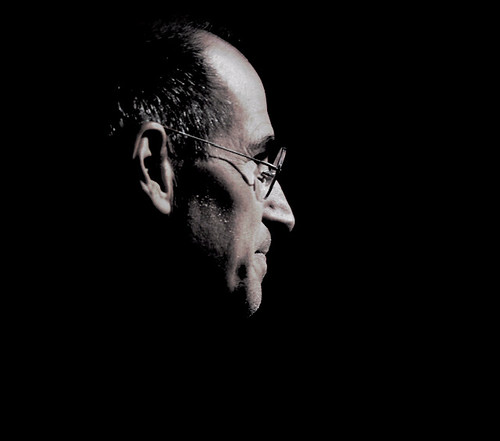 WHEN STEVE JOBS PASSED away I turned off the three Apple iOS devices we have in the house, knowing that I would be snipping communications with family eight time zones away. It was like lighting a votive candle.

Shutting down our part of the Apple world seems to be a fitting tribute to the insanely great entrepreneur who made technology beautiful. I also wanted some time to think about the path Steve took through life since we both graduated from high school in the same year, started college at the same time, and absorbed a lot of the same cultural influences while teenagers. It's hard motivating my current crop of creative multimedia students when they realise that the world's most dominant creative technologist dropped out of college after one semester. I point out that Steve was a good listener and a sponge for clever ideas. He sat in open public lectures at the Hewlett-Packard Company where my brother worked in Palo Alto, California and did a summer job there, working alongside Steve Wozniak. When in Portland last year, I bumped into someone who knew Steve when he audited classes at Reed College there, while kipping in flats, returning Coke bottles for food money, and getting weekly free meals at the local Hare Krishna temple. Jobs later said, "If I had never dropped in on that single calligraphy course in college, the Mac would have never had multiple typefaces or proportionally spaced fonts."

In the summer of 1980, I listened to Steve Jobs in the Stanford Faculty Lounge order a brown bread sandwich with alfalfa sprouts and tomatoes. No meat. No mayo. No butter. That was the first day I ate alfalfa sprouts. Steve was chatting with another shaved head. He seemed to blend right in with a table of countercultural academics, one wearing a tunic. Steve was not wearing a black turtleneck with his sandals. He walked across the grass after a light lunch.

Over the years, I've dropped in and out of the Apple ecosystem. We had an Apple II GS when nobody else in the neighbourhood had a computer. And although my employers preferred offering me PC laptops instead of more expensive Macs, I graciously accepted my first two iPods as gifts and then stepped up into the iPod Touch after our three-year-old daughter proved she could use it by herself.

I miss Steve Jobs. But not as much as the tech world misses the man with exceptional vision and profound impact.

Reader memories of Steve Jobs from the NYT slideshow and thousands of YouTube clips.

Guy Kawasaki on Steve Jobs: video. And my stack of Steve Jobs.

WHEN STEVE JOBS PASSED away I turned off the three Apple iOS devices we have in the house, knowing that I would be snipping communications with family eight time zones away. It was like lighting a votive candle.