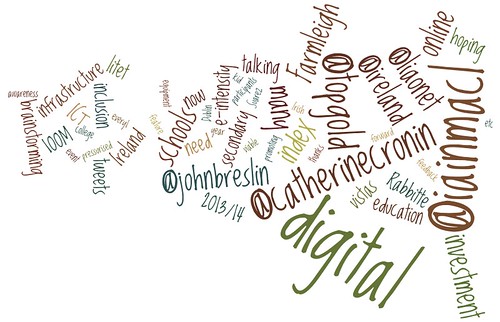 I LEARN BY LOOKING BACK and that's certainly true when sifting through a day's notes after the #digitalhorizon meeting in Dublin, Ireland. The accompanying word cloud offers a good summary.

At Farmleigh with John Breslin

The day offered a framework for further action and that is the reason I went to the event. Without an agenda item related to follow-up action steps, the day would have been a talking shop featuring advocates and politicians. I have Google Reader for that.

Perhaps I was impolite (at least in the mind of one outspoken politician) but I kept my head down during much of the proceedings, following the twitterstream that generated the word cloud embedded in my blog post. I have discovered that my collaborators are already digitally savvy. Dozens of them were listening to the flow of information emanating from Farmleigh as a handful of participants tweeted thoughts with the #digitalhorizon hashtag. And although I have time and respect for the Digital Amish who use alternative methods, I rarely connect with those who can't think at light speed. If you can listen and tweet in a live slipstream, you're in my closest circles. Five people among the 88 seated in Farmleigh fit that description. Perhaps we will connect as this Knowledge Society initiative gets wings.

The Minister for Communications fancies an updated National Knowledge Society Strategy. I am prejudiced against putting the strategy on the same rails that fostered information society towns and Mobhaile, an infrastructure that ignored the ease of blogging. Minister Pat Rabbitte cited a figure of seven million jobs were "advertised online only" and that figure tracks with what we know in the Limerick Institute of Technology. For that reason, we award academic credit to students who create effective online portfolios.

The Minister talked glowingly of necessary ICT investments in education, hinting there might be funding channels for web-based learning. The truth will be in the December budget. As matters currently stand, I cannot get simple administrative staff deployed to help carve out content from our curriculum for use in Ireland's notional web-based training libraries. So the information gets stale in our Moodle silos, inaccessible to teachers and gifted students who might like to engage and learn.

Some of the most enthusiastic learners are on pathways blazed by the Irish Coder Dojo movement. Bill Liao gave an impassioned view of the programme during an open mic moment. I doubt more than six people in the Farmleigh audience had heard about ICT advocates helping pre-teens learn how to create items for the digital economy in Ireland. Coder Dojo needs a funded framework so Ireland can celebrate clever nerds. One way out of a recession is to encourage teens to spend more time creating clever web designs, memorable animations and computer games. Those digital skills, when polished in higher education, create companies whose products aren't even in the worksheets used by the Irish government to define the future employment landscape.

Another easy win for Ireland's Knowledge Society is in the specification of "accessibility". Currently this term is owned and defined by social advocates. I believe something is truly accessible if it can be seen in more than one format. Specifically, I believe government funding for website should be made only if those funded sites generate RSS feeds along with code to allow the sites' content to be shared on social networks. Government funding for apps should be made only if those apps expose an API. Without those accessible features, the built products are little more than vanity projects.

Several attendees have commendable initiatives already in work. They include Freefi models for free and open wifi. I don't think it would be difficult to get one merchant on every major street in Dublin to open a wifi node to the streetside of the business premises. I'd do it via a reduced rates structure because if a merchant lights the street with data or with overhead illumination, the open street is a more civil place.

David Dean's presentation from the Boston Consulting Group (BCG) was the most insightful of the day. He revealed an e-intensity rating scale that placed Ireland in the middle of the pile of European countries. The ratings revealed numbers for entitlement, engagement and expenditure. In a follow-up blog post, I will offer a digital version of the BCG research. Dean made a good argument that "there is no single metric for measuring the impact of the internet on the economy. His suggestions, heard by the minister with responsibility for the area involve

2. Push for higher engagement by citizens.

Several of these recommendations are already part of the very dynamic programme run by the Irish Internet Association. I believe the IIA will continue be a major player in the evolution of Ireland's Knowledge Society, including such important initiatives such as Open Data Days.

During the brainstorming session, I tossed a few ideas into the hat. The chairman mentioned some of the proposals that percolated out from other groups, including "low cost portable technology", a portal for older people to access information about public services, and smart phones with non-visual navigation.

It was an interesting day all around, in a venue that showcases a fine national asset. I don't know if I'll be invited back to the table for any sort of follow-up. I've already started a few initiatives that could complement the Knowledge Society Strategy and would welcome a peer review of how we're going forward with our bootstrapped ideas. My next stop is Limerick OpenCoffee to connect the dots with Gabriela Avram and her Connected Limerick project.

From Bill Liao -- 12yo Pizza Bot Man in Cork brings to mind a 6th grader at TEDx.

Audioboo -- In conversation with John Breslin at the Digital Horizon event

I LEARN BY LOOKING BACK and that's certainly true when sifting through a day's notes after the #digitalhorizon meeting in Dublin, Ireland. The accompanying word cloud offers a good summary.

At Farmleigh with John Breslin