« I Listen Most Intently through Earbuds | Main | RIP John Marks » 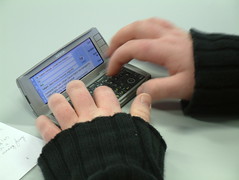 IRELAND'S HOPE TO CULTIVATE A Knowledge Society actually starts with ensuring teachers can play an active role in it. That's a big hurdle because it means empowering digitally literate teachers.

In the DailyRiff, Donna Murdoch writes about an upcoming digital divide among educators. She cites the essential requirement to "keep up on a constant basis, usually through our Personal Learning Networks" and suggests "Twitter, Google Plus, Classroom 2.0, and various other communities" because they are "a wealth of information for self-directed educators". There's also #edchatie and CESI in Ireland.

Media literacy drops into several modules taught in the Creative Multimedia Honours Degree in the Limerick Institute of Technology (LIT). When we first created the degree in 2005, accreditation teams were happy with seeing computer literacy and visual literacy on the curriculum. By 2007, we included social media literacy in the mix. Our 2012 revision of the Creative Multimedia Honours degree encompasses a sociocultural orientation that focuses on literacy as a social practice. The semesterised programme emphasizes the role of literacy with a range of socially patterned and goal-directed ways of getting things done in the world.

We are no longer living in an era where being able to read and write makes someone literate. In fact, an extremely well-read person from the early 20th century would be "illiterate" in the 21st century. If your only touchpoint for communications involves a box connnected to a handset with coiled wires, you are part of the population that the European Community wants to help with training and subsidies.

The problem in Ireland's case is this definition of "new literacy" has not become an imperative. Those in government think that broadband is ubiquitous and ministers assume they can tax its presence by changing the concept of the television license to include any household with a telephone line, television antenna or mobile phone signal strength. (In fact, the Irish government assumes all homes have at least one of these features, so all homes pay the fee.) The money collected will go into pushing digital signals through the air for citizens. It would be nice to know that some of that money could be redirected to agencies who would use the funding to teach new literacy skills across Ireland's public digital transmission network.

In LIT's classrooms, freelance journalists have taken courses in which they can build upon news reporting skills and translate those time-tested skills into publishing on the internet and delivering content through ePubs. Visual artists arrive with portfolios to start their creative multimedia work and they evolve their skills to create clever animations on mobile phone, laptop, television and desktop screens.

Beyond the simple process of teaching a student how to present digitally lies the need to prepare students for work flows and jobs that will exist after the deepening Irish recession. Truth be told, the staff who made the current BSc in Creative Multimedia do not know the exact job titles of jobs in the year 2022. However, we do know the digital literacy and cross-domain skills that deliver results. Some people consider these skillsets to be the true essence of a creative digital citizen. Others call it "thinking out of the box". We earnestly believe that it makes no sense to train someone to highly professional levels inside a software suite. Doing that sets up graduates for immediate retraining when starting paid employment. Instead, it makes more sense to teach students how to stay relevant. That means knowing how to find things, how to learn to learn, and how to accomplish collaborative goals through a self-directed process.

A lot of the third level learning process in LIT embraces digital technology that was not in place five years ago. Some of these processes require a wider access to the internet, using data communications protocols blocked at the proxy level. Where I work, it's a zero base game that involves asking for certain restrictions to be lifted so students can interact with a bigger expanse of digital space than ever before. That larger electronic work space feels like the real world, as it should.

And for those students who are successful working inside that bigger work space, there's a strong possibility that they will finish their Honours Degrees with a higher qualification of being "educated" than those who came before. And that's what the Knowledge Society expects.

Image from our 2005 teaching of creative multimedia with a screen one foot away.

Posted at 11:55 AM in Best Practise | Permalink

IRELAND'S HOPE TO CULTIVATE A Knowledge Society actually starts with ensuring teachers can play an active role in it. That's a big hurdle because it means empowering digitally literate teachers.