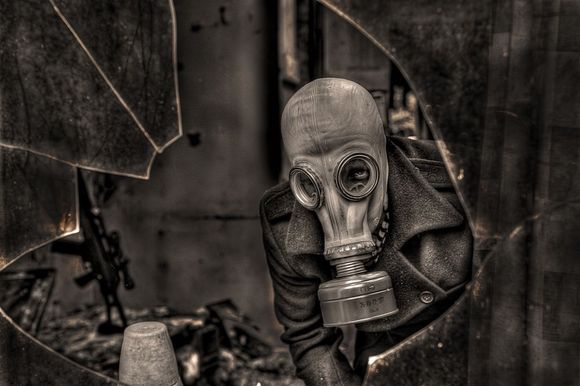 THE ANNUAL Pen & Pixel Exhibition in LIT-Clonmel features excellent creative multimedia work but this year is the first to include a hard cover book, HDR imagery and epubs.

The image in the blog post comes from Edgaras Zvirblys, a talented photographer who has imagined images you might find while shadowing soldiers in a nuclear apocalypse. It's a Blurb Book.

Buying mine to help a starving student http://bit.ly/GGHqRo who is Behanced.

Edgaras Zvirblys (aka edzed) on Blurb -- "Soliders in a Nuclear Apocalypse" 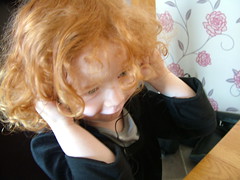 Bernard Goldbach in Cashel | Image from my Flickr | 470 words

Mia the Storyteller, like Dervala the storyteller, understands the need for people to connect with truly interesting narratives. We humans like to share ideas because we connect and bond through common thoughts.

Mia, like her mother the animator, knows it's important to put a face on a story. Mia knows the face of Bart when he makes a mistake so she makes the same faces when narrating her own short stories.

Effective digital storytellers get paid for the same because they can weave aspects of brands, company culture, and employee values into stories that resonate for the C-suite, that move the needle for investors, and engneder customer loyalty.

FOR NEARLY EVERY YEAR of my life in Ireland, the Mahon Tribunal has been churning along. Today, its final report dropped. 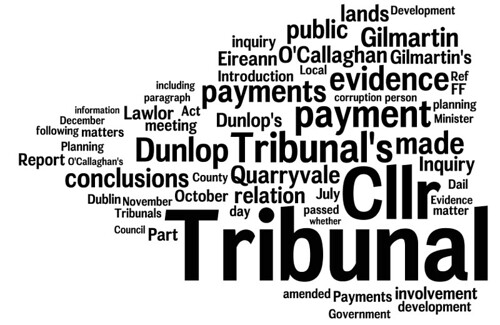 Even though the Mahon Report Word Clouds might not show this directly, terms like "corrupt" and "payment" feature prominently. But since this is Ireland, expect no perp walk.  The politicians identified in the report were often re-elected with full public knowledge of what they had done. Grateful to their constituents, they built bridges, secured funding for schools, and proposed lofty construction projects that often never came to fruition. Most importantly, they proved that "all politics is local" and that ardent locals will always welcome politicians who bring home the bacon.

I honestly don't believe anything will change in the way Ireland does its business because the political will isn't strong enough to impose an inviolate code of ethics on those elected to national office.

You can get the official report at http://t9.ie/mahon. Or just  Download Mahon Report Unlocked 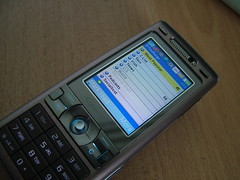 Bernie Goldbach in Cashel | Image from the Irisheyes photostream | 99 words

WHEN TWITTER WAS ONE year old, nobody in Ireland was using a mobile Twitter client. The most popular cameraphone on Flickr was the Sony Ericsson K800i (like the one in the shot browsing my newsfeeds).

Irish blogging was one year away from its all-time peak. More new cars were sold in Ireland during the first quarter of Twitter's life than in the entire calendar year 2009. Back in 2006, the first year of Twitter's public existence, more people in Ireland used Jaiku (now totally wrapped up) than used Twitter and a lot of the fast-breaking news emerged on Boards.ie. I had fewer than 10 Irish friends on Facebook back in 2006 because only a handful of clever people knew how to get .edu email addresses while living in Ireland. My iPod weighed more than my 2006 phones. Nobody used apps, Internet Explorer was the default browser for most companies, and Google was doing no evil (as well as doing no maps). Hipsters (not even a word in 2006) used widgets but common people compared their ringtones . The road warriors I knew had clever mobile web page work-arounds because nothing downloaded fast while on the road since you couldn't find a free and open public wifi spot that served coffee. Our email didn't sync. Working mail on the road meant downloading headers only via the wireless modem connectivity that charged you by the minute. In six short years, the internet has well and truly moved into our pockets and purses. I would not have made a five-year long bet that would have predicted the kind of phone I'm using today. 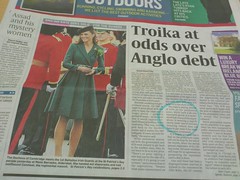 ONE OF THE easiest things you can do with a smartphone is to share your surroundings and I try to do that every week with a short newsround from my back garden. This week, I asked some third level students for comments during the recording session.

The cover shot features the Duchess of Cambridge, dressed in green, meeting the 1st Battalion Irish Guards. I omitted the other meeting between England and Ireland because the English scrum totally demolished Ireland's rugby team in Twickenham.

The Sunday Times splashes green images from St Patrick's Days events in Dublin, Pisa, Moscow and Belfast. You can see those images by clicking on the video link (below or by clicking the photo) or imagine them by playing the audio clip that features in this blog post. And if you're hard pressed to imagine what green looks like, Jonah Lehrer has the book just for you (recommended below). 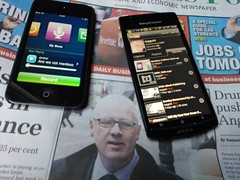 I FINISHED A WEEK OF curating the Ireland account on Twitter using 100% mobile connectivity and realised the task involved three screens. Let me explain.

I used an iPod Touch to monitor Boxcar notifications,  to listen to audio snippets and to post Tiny Reviews. I used a Sony Ericsson Xperia Arc to make videos and to create night photography. And I configured my Nokia Lumia as the primary handset for tweets and for dedicated search strings. Alongside all these screens sat my Kindle, reading mainstream news and items referred via Readablity. The combination of all these screens gave me comfort. I can't imagine trying to follow a flow of social media while mobile through a single viewing point. That would be slower, easy to crash, short on battery power, and prone to error.

It will take me another week to comprehend what happened during my week-long foray into location curation. I can already see steps I'd recommend to improve the accuracy and breaking news potential to producers and researchers. Stay tuned to my blog if you're interested in those conclusions but know the answer will involve the simultaneous use of two or more screens.

journalism I am @topgold on many social networks. 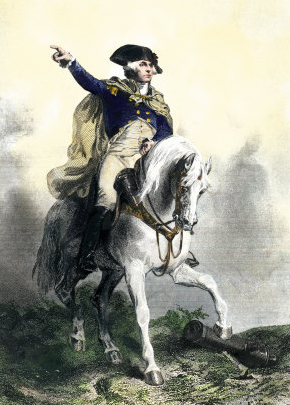 AS A STUDENT of American history, I decided to help the National Army Museum in London decide which five military leaders are represented at Enemy Commanders: Britain's Greatest Foes, a celebrity speaker event on Saturday 14 April 2012. I think George Washington deserves to be on the shortlist so I voted for him.

This meant setting up an account with the museum in order to get access to the plus-one button next to Washington's profile. George is running well behind Irish favourite Michael Collins, another tall commander.

As a young teen, I read a lot about Washington and told my mother he wasn't the rich, British-oriented Virginia aristocrat that she learned about in primary school. He never set foot in England and never traveled to Europe. We revered him in the Boy Scouts because he made his living as a surveyor, defining tracts of forests on the fringes of settlements. He knew the wilderness and spent five years in it fighting native American Indians.

I don't think George Washington completed elementary school. He had to work his family's impoverished land under the stern hand of his domineering mother. My books on Washington tell about his proudest possessions as a child. The Washingtons owned six good pairs of sheets, ten inferior pairs, and seventeen pillow cases. Their proudest possessions were described as "plate", one soup spoon, eighteen small spoons, seven teaspoons, a watch and a sword for a total value of £25 10s. Most of the eating utensils were carved from wood.

This modest man became America's first President, sleeping at least two nights in my hometown of Lancaster, Pennsylvania. On those overnight stays, he kept his horse in one of the stables later owned by my grandfather. That building still stands today.

National Army Museum -- "Who was the greatest commander to face the British?" is the question raised in an online poll. 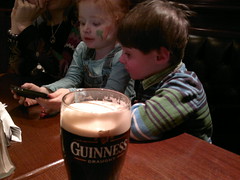 THIS IS MY 18th St Patrick's Day in Ireland and the first one where I was asked to curate the location. I'm @ireland on Twitter for this glorious Saturday.

I wish I could have spent the day in Dublin because that's the site of the best parade. However, our family routines are ruled by a very verbal four-year-old (at right) and she wants to watch the parade at her level in the middle of Cashel where we live. So we will.

Every once and a while, I look back at Ireland through the eyes of a visitor. My American accent will always identify me as a blow-in and I will keep the core part of the accent since it's part of my identity. I've taken that American perspective into 18 Irish counties (one for every year of my stay in the Republic) and now think I'm able to make some helicopter observations. 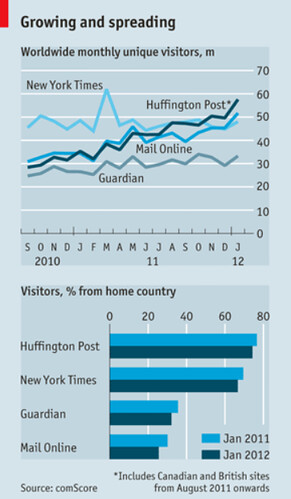 AS THE METRICS from the Economist at left show, to survive in this hyperlinked world, newspapers need a global audience. That would include our local papers in Tipperary.

The comScore graphic shows what happened at the start of 2012--the New York Times lost its top spot in comScore’s ranking of the world’s biggest newspaper websites to Britain’s Daily Mail. Some say that's comparing apples to oranges because the Old Gray Lady is a proper broadsheet and the Mail is an unapologetic red top tabloid that commands a big  online audience incorporating a personal finance site that the paper owns.

There's actually a bigger story behind the numbers and that story reflects a growing trend of  national news publications going global. I can see that trend on my Kindle subscriptions where the Irish Times outsells the Irish Independent in the Kindle version (the reverse of the print edition sales). In the comScore stakes, a mere one-quarter of the Mail’s online readers are in Britain. The Economist report explains that "The Guardian, which caters to those who like their news left-leaning and serious in contrast to the Mail’s right-wing raciness, has one-third in Britain and another third in America."

Then there's the the Huffington Post, which since its launch in 2005 has become the biggest site of the four (it is not in comScore’s “newspaper” category).

As The Economist says, "That the HuffPo is beating papers with a history stretching back to the 19th century is a sign of just how differently news works online. The HuffPo is designed for the wired generation’s short attention spans and addiction to social media; alone of the four, it has managed recently to increase its 'stickiness', the number of stories each visitor reads. And it mixes both hard and frothy news (much of it rewritten from other sources, though an increasing amount is original) with generous dollops of opinion by guest bloggers."

If my local newspapers--the Nationalist, the Tipperary Star, and the Limerick Leader--expect to survive, they need to adopt a HuffPo model and invite a younger crowd to write edgy 200-word illustrated content, primarily for online subscription sales. And if they fail to do this, my five year prognosis is that at least one of them will fail to remain on newsagents' shelves in the year 2017.

I FOLLOW DEPUTY Sean Sherlock, hoping that some part of Ireland's creative community's concern about copyright will rub off on the politician.

As part of this educational campaign, I sincerely hope Deputy Sherlock sets aside six minutes to watch Rob Reid outline copyright math on YouTube. An important lifetime event from Rob on the eighth of October 1998: "(That was) the day that the RIAA sued Diamond Multimedia for releasing the first true mass-market MP3 player, the Rio. Their goal was to make open MP3 players completely illegal in this country. So, assault weapons, yes; iPods, no." What the music industry consistently wants to do via restrictions placed on the reuse of audio and video often damages innovation.