Bernie Goldbach in Cashel | Screenshot from my Alpha.App.net Dashboard

I AM DABBLING with the community inside App.net because it's a nice conversation pit. It's not a networking nirvana but it sounds a lot like Jaiku in 2006 and Twitter in 2007 with a boatload of iOS app developers thrown in for good measure.

In the App.Net Pasture 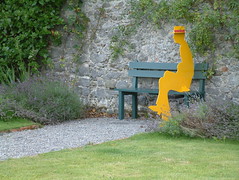 IT IS NOT FAIR to criticize one of my favourite arts festivals without spending at least 10 hours immersed in it but my first impression of the 2012 running of the Kilkenny Arts Festival is that it lacks an element of BIG VISUAL.

In many of the past years, you got big art on walls or hanging from poles or interrupting outdoor spaces (like the cut-out at right) or installed in vacant warehouses. I didn't spot that dimension this year and that meant Kilkenny's native energy subsumes the arts festival.

There is still plenty to energy around the town but a less prominent international fringe element. Most of this year's fringe artists are Irish as are most of the pop-up galleries. Although the fringe is normally subordinated by festival planners, it is an essential dimension of enjoying art in all its diverse forms.

Missing an Element of Fun in Kilkenny Arts

Sunday Papers with the Gold 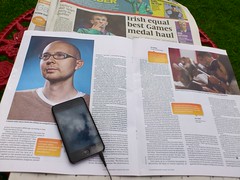 LOTS OF COVERAGE in the Sunday papers today for Ireland's best haul of Olympic medals since the 50s. I flicked through the pages of the FT Weekend Magazine, Sunday Times and Sunday Business Post to give an American's take of Ireland.

I'm thinking a lot about "mindfulness" lately, mainly as a result of listening to a string of audio conversations about topic on Audioboo. The "Valley of God" cover story in the FT Weekend Magazine runs parallel to the Audioboo conversation nurtured by Dean Read. There's a wealth of warm conversation spinning off the mindfulness meme on Audioboo, making the interaction a welcome contrast to some of the vitriol spewed on Twitter. 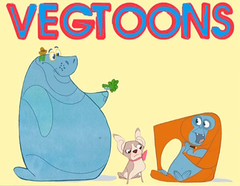 CARTOON SALOON AND FRIENDS are kickstarting an animated series that should help me live longer. So I'm contributing money to its production.

I watched the Vegtoons trailer on YouTube with our four-year-old daughter on her mom's Xoom Media Tablet. She liked it and wanted more so I pledged $50 so we could get some character drawings. The characters look entertaining and the content appears educational. The promotional material says, "In a light-hearted, sympathetic way, the show will help to raise awareness for living more compassionately and consciously. The intent is to open the door to a deeper conversation in our society, one that is respectful in articulating the values of vegetarianism, but also fruitful in broadening people's imagination for what is possible."

If it's truly successful, I'll be more vegan than Keith Bohanna before Christmas 2012.

See the Vegtoons trailer. And visit it on Kickstarter.

WE NEED EGO LIGHTS in order to run effective Google Hangouts. Without them, we look ghoulish.

So I'm looking at Lowel Blender lighting, mainly because they incorporate two sets of LEDs. That means Tungsten and Daylight color are quickly and easily blended. The lights are intelligent so they match the mixed light sources of real world locations. Or they can create a contrasting colour blend to make pasty-white Irish skin stand out without the hassle of spray-on tans.

The other thing that caught my eye is these lights have good consumer commentary about the effective usage period of on-board battery power. They also run well on AC and in the winter months, they can serve as a space heater. I could get my Lowel Blender and cases from Prokit in London. 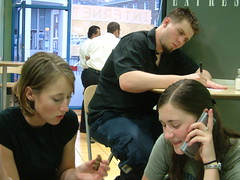 I REMEMBER GETTING A LOT of slagging for carrying a brick for a phone because most of the critics didn't understand the phone's wifi and keyboard let it replace my laptop.

Today, it's hard to get a smartphone without a wifi antenna inside. I use my Lumia's wifi to make Skype calls to mobile phones in other countries for as little as two euro cents a minute. I use Viber on iOS to ring people for free. And yet I still pay nearly 80 year a month for my mobile phone service so the wifi hasn't actually reduced my phone bills.

When I first started carrying a Wifi phone (the Nokia 9500), I wondered about the viability of 3G in the age of inexpensive Wi-Fi connectivity. Why use the over-the-air network if you could do everything for free via Wifi? Then I saw the issues.

KATIE TAYLOR approaches the 2012 Olympic boxing ring and thanks to the magic of digital terrestrial television, my in-laws get to see their first high definition gold medal.

We visited Argos for a €35 Alba Saorview unit and also walked out with a 10 euro SCART cable. I had already given a 30 euro antenna from Maplins to the in-laws and installation was simple. Connect the cables to a stupid televison and let the intelligent channel finder do its work. The digital terrestrial signal is strong enough in Celbridge to allow a small antenna in place of a larger rabbit ears.

Today, it should deliver a pathway to gold for Celbridge viewers. 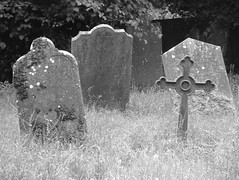 I PASS THE GOLDEN cemetery, a few miles down the Golden Road, just outside my front door in County Tipperary. The graves have stories to tell.

I teach creative multimedia in the Limerick Institute of Technology and through a synergy with several other organisations (see Slideshare below), I plan to show ways of creating shareable stories with tour operators, B&B proprietors and people interested in promoting Ireland as a destination for The Gathering in 2013.

We're trying to move the needle in a big way, because the goal is to bring an additional 325,000 tourists to Ireland next year. It's a hard-and-fast goal, as rigourous as an Olympic standard.

250k for Women in Start-ups

ENTERPRISE IRELAND has opened a €250,000 SWIFTS fund to support women in fast-track start-ups.

SWIFTS is a new initiative from Enterprise Ireland to support female entrepreneurs as they investigate the viability of establishing a new high-potiential start-up business. Funding of up to 25,000 euro is available for projects that have the potential to create jobs in Ireland and achieve growth in international markets within three years.

This is a competitive fund. This means businesses that demonstrate an ability to move beyond the domestic market and offer internationalisation could get funding for applications submitted before 6PM on Tuesday 4 September 2012.

Full details on this call (including breakdown of criteria): http://enterprise-ireland.com/femaleentrepreneurship 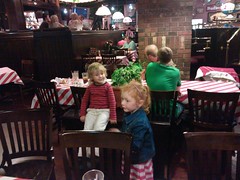 WE ENJOYED A LONG dinner while sharing a long table and a Stammtisch moment with German friends thinking about living in Ireland. I hope there's a follow-up Stammtisch next year, with both girls in the photo sharing stories.

I have a lot of positive things to share about Ireland, having moved from Germany in 1994. Many of my Irish friends question the logic of my decision, knowing I could have moved back to California instead of remaining in a country full of too much rain. I haven't regretted my decision.

But I didn't have to decide with a family in tow and that's a big factor for Germany professionals who I know. It's important to have an income because the unemployment rate is high in Ireland. However, my Wonder Reader delivers new job offers for German-speaking tech professionals several times a week. And employment in Ireland's informatics industry remains robust.