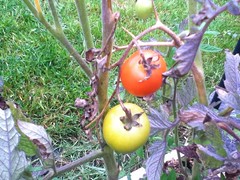 I SHOULDN'T EXPECT to have a happy vegetable garden in Ireland but I can't help comparing my green fields of Ireland to my super productive vegetable harvest in the Garden State of America.

Actually, I don't know if Lancaster County Pennsylvania can lay claim to Garden State because I hear that claim coming from New Jersey. However, our kitchen radio often had WGAL on the dial, where my mom told me the call sign stood for Garden Acres of Lancaster.

Outside our Irish home, we enjoy none of that agricultural productivity of Lancaster County. That is not a slam on the Golden Vale but just a fact of life about the poor soil outside the house and horrid summer we endured.

A combination of bad soil and saturated soil conspired to reduce our cherry tomato harvest to one little morsel every week.

FACT: Bernie Goldbach likes food. But he's not a foodie. 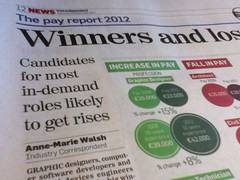 Bernie Goldbach in LSAD-Clonmel | Image from the Indo

I GET A STEADY FLOW of Irish job openings as a daily newsfeed. There isn't a day without an offer for web developers, content management specialists or front end designers.

We train Honours degree students in the fundamental skills related to new media. As recurring surveys show, the pay packages for these specialisms are recession-resistant. That is good news for those considering a career in the smart economy.

And if that's something intriguing to you, I strongly recommend the Level 8 Honours Degree in Creative Multimedia as a point of consideration.

Bernie Goldbach in Thurles | Photo by the dire iTouch camera

I WONDER IF it's possible to teach Transition Year students some of the new media processes we employ in our electronic publishing module.

It's actually a multi-faceted question because I want to teach writing skills, editing skills, production skills and an awareness of syndication. These are skills of social journalism. As the semester unfolds, I will have a syllabus to share with other Transition Year teachers.

I'm working with Transition Year in the Thurles Christian Brothers School. If you follow me on Google Plus, Twitter or on Audioboo, you'll hear the adventure unfold.

Bernie Goldbach in Clonmel | With Mia under cover

I HAVE FOLDED into the Irish School Run and will be adding to the soundtrack of young Mia's life with audio clips I'm recording about going to school.

Today was my first day on the School Run and I encountered a ghost of myself. Back when I was five, I had to work through an incident of bullying (before the term was engrained in the minds of teachers). In my case, it was over crayons. Jack told me that only girls liked red crayons. He told me boys liked black crayons. I disagreed and although the details are murky, all 64 crayons ended up on the floor and both sets of parents ended up in the vestibule of the convent to explain what they knew about the situation.

I survived and grew. In young Mia's case, there are little group dynamics emerging on the playground before the school doors open. I'm watching her encounter a situation where girls two years her senior are blocking her from using the Hopscotch squares. "Sharing is caring," I've told her. When she sees rude and opposite behaviour, she's a little upset but like me and the crayons, she's well able to pick herself up.

Being Led to Big School

Bernie Goldbach is trying to jump start a journal about primary school days.

I HAVE SEEN enough anecdotal evidence to realise a full-on iPad experience slows down learning in primary school. I continue discovering experts who agree.

"Smartphones and iPads are the fast-food outlet equivalent of information technology, in that they provide a quick, convenient net fix. They are so easy to use that my three-year old grandson can hack into and navigate his mum's iPhone, browse the iTunes store and download apps on my iPad, and instruct his grandmother on how to use Skype. One year on, he has mastered my netbook and laptop to browse YouTube for videos of Buzz Lightyear, Ben 10 and Nerf guns.

"So, you would think that if his primary school was going to suggest the use of iPads and educational apps instead of books that I would be all for it? No way.

Learn by the Book Not by Apps

A Downton Abbey Kindle and Other News 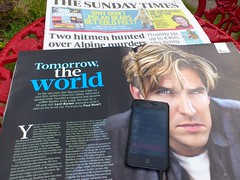 Bernie Goldbach in Cashel | News spread in back garden

I'VE STARTED LOOKING FOR Kindles in high profile places. This week, I found one in the set of Downton Abbey.

I like knowing that Downton dish Dan Stevens "had a special pocket in his Downton costume to hold a Kindle". [1]

It's also very interesting to me, a third level creative multimedia lecturer, to follow conversations about whether it's academically effective to integrate smooth-performing touchscreens into my curriculum. Their assortment of animated features might actually degrade learning. [2] [3] Granted, most of the evidence is anecdotal but the discussion will run in earnest through the 2012/13 academic year among my peers.

A Downton Abbey Kindle and Other News

Continue reading "A Downton Abbey Kindle and Other News" » 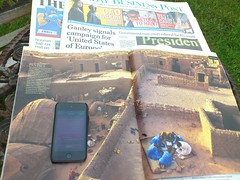 Bernie Goldbach in Cashel | My iPT outside

I HOPE APPLE updates the iPod Touch but not with the latest and greatest technology.

Our iTouch is a perfect piece of consumer electronics for users from Kindergarten to post-doctoral students. It fits easily in the hands of a four-year-old and its battery life easily stretches across a work day (providing we avoid intense sessions with Moshi Monsters). I use the little iTouch primarily for recording and listening to audio so I'd like to see its memory boosted to 128 GB before its processor is upgraded. I think the fourth generation iPod Touch camera sucks and I hope Apple agrees by inserting better optics into the camera on the fifth generation iPod Touch. I'd prefer all the connection dock ports to remain the same on the iPT 5G because I really don't want to buy adapters or new connectors.

I don't want things like power-using vibration alert or LED flash capability. And I don't need Oleophobic coating on the screen.

Just more memory and a better camera and I'll spring for a new iPod Touch.

Bernie Goldbach is not a lover of white things.

The Erosion of Distributed Development 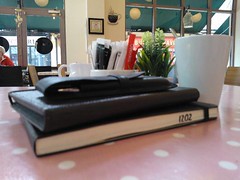 ON THE TABLE in front of me sits tools I use to actively gather information presented to me through a system of distributed development.

In several academic modules at the Limerick Insitute of Technology, I show how things have changed since I first taught adult learners in the pre-Y2K era in Ireland. Back then, you needed to leverage computer programming and communications technologies. It was clunky and most of the experience was not portable.

The dotcom boom at the turn of the century was great for copywriters who produced web pages and downloadable files to promote things. When I first started teaching multimedia at third level in 2002, we talked about reformatting and republishing "rich data into packets that fit the capabilities of readers, viewers and listeners". We promoted the smart use of ICT [1] for syndicating multimedia content. "A smart producer ensures the content passes through the production process once, while exporting many different format types", we advised. That maxim holds true today. 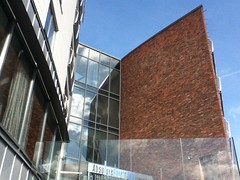 ONE OF IRELAND'S most dynamic social networking events happens on the first Thursday every month in Limerick's Absolute Hotel. In many ways, the free two-hour meet-up works as smoothly as mature online social networking.

I attend 80% of Limerick Open Coffee (LOCC) meet-ups because at least one conversation during every LOCC session leads to one of our creative multimedia students getting a job offer--not necessarily from the conversant but from a direct line of introduction for the student or graduate. LOCC has become the most efficient word of mouth messaging for me in Ireland.

Talking with David Quaid, a search specialist, I realised the unique meeting dynamic of LOCC does not work for people who only play the numbers game with their business cards, their Twitter follower count or their web page impressions. The LOCC dynamic involves conversation with an meaningful engagement with three or four people at a time. It's rare to use a meeting room with a string of presentations at LOCC because most of the regulars--the men and women who have been at LOCC meetups since 2007--simply won't sit down and listen. They get more out of standing and conversing. And so that's the way the dynamic works.

I recorded four conversations during the September LOCC. If you're subscribed to my blog, the 28-minute MP3 file should download automatically. It's also on Audioboo and will play directly from the blog post and from the newsfeed.

Continue reading "LOCC in the sun" »

Outside the Castle while Royalty Converse 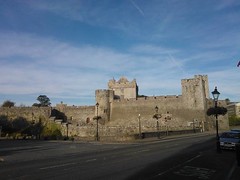 MORNING NEWS IN IRELAND occasionally covers the savings government agencies expect to achieve through enhanced operations and consolidation. From what I often see, however, limited consultation with troops on the ground occurs before the grand plans start making their rounds in the media.

It's as though the masters of the castle fail to check with the foot soldiers or armorers before reinforcing defences before battle. Something like that happened at Cahir Castle (in the photo) before it fell to larger than expected ordnance and technology-leaping catapults.

My current focus lies with the amalgamation of county structures in north and south Tipperary. On paper, it looks like there will may be excess staff in some functional areas. Based on managers meeting to flesh out job descriptions and historical workloads, some people may be erased from organisational wiring diagrams. This gives the Minister for Public Expenditure the joy of an efficient public purse.

Continue reading "Outside the Castle while Royalty Converse" »