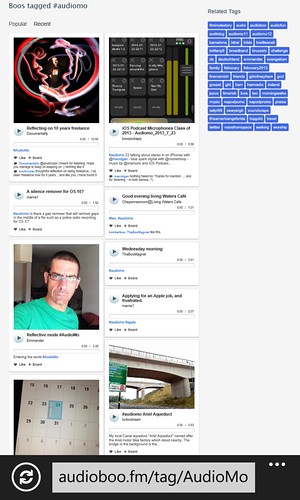 Screenshot from my Lumia 925.

I FINISHED #AUDIOMO this month with several lingering thoughts about social audio. In short, I think spoken content can sustain community initiatives.

You won't find more than an niche of people online who admit to subscribing to audio content as well as creating their own spoken responses to it. That's what makes the annual audiomo project more interesting for me. When I spend the time to set up a listening post as well as carve out the time to make my own contributions, I get real engagement.

It's engagement that extends beyond the month-long activity stream. In my case, I've audio subscriptions set up that extend before Leo Laporte had RSS audio feeds for his radio show. I've been listening to some of the same voices for more than 10 years now and I've two 250 GB hard drives that contain half-hour podcasts from the first semesters that I taught creative multimedia to university students. It's a genre that paved the way for broadcasters to extend their message (and their marketing reach) into the hundreds of thousands. Sponsor jingles and embedded messages crossed oceans and went into outer space, thanks to engaging audio clips.

A few special things happened to me during this month's audio activities. Because I committed to trying to make a five-minute contribution every day as well as to listen to a core group of 20 people offering their own audio, I had to give up listening to a dozen other audio subscriptions that were downloading all the time onto my iTouch. Now I feel behind in my professional listening. But a little voice inside my head suggested that because I took the time to hook up, listen and respond, I'd developed important and engaging professional contacts that should serve well into the future.

Discovering How Much Streaming Uses on Mobile

BECAUSE I DEPEND UPON wifi connectivity on my work laptop, I have discovered how much over-the-air data connectivity actually costs. That's because my work laptop doesn't connect to the campus wifi node and I'm tethering from my personal O2 account to compensate.

For a week, I used my Hauwei E586 Mifi as my wifi service but the combination of serving YouTube, BBC iPlayer and RTE Jr streams at home along with my normal daytime browsing means I use an average of 1.32 GB of O2 data every day. We have 30 GB of data on a reasonably priced O2-Ireland account and don't want to run up more than the contracted data services.

I've resorted to turning off all the two tablets in the house at night and ensuring the smartphones have Wifi shut down at night as well because they were updating software, downloading the Guardian and getting email syncs when we didn't need them. Along the way, I've learned how data-hungry video streaming services really are.

Continue reading "Discovering How Much Streaming Uses on Mobile" »

I Want to Listen to Headstones

SEVERAL BRILLIANT SUMMER evenings in County Tipperary have left me wanting to complete an historic graves project with headstones in Hore Abbey, a site just 900 metres from our front door.

It's a place I've photographed often since moving to Cashel in 2005. Now I want to learn from the experts how to put together a body of work that can be safely digitised into a dataset that researchers from around the world might use to find their part in Irish history.

Continue reading "I Want to Listen to Headstones" »

I HOPE WE CAN look back in a year and point to an online watering hole that brings social intranet plumbing to my workplace. And I also hope the system is more advanced than in the photo.

I've a watchlist for "social intranet" and every month something new percolates through for my consideration. I started with discussion boards supplemented by mailing lists then let iOS notifications tell me when something relevant dropped into a working Dropbox folder. But these kinds of signals are mere noise unless they come with social tools that aid collaborative projects.

During the months ahead, I need to test some sort of easy mechanism that comes equipped with notifications that alert people on all the major mobile operating systems. At the moment, I think that could mean cultivating a LinkedIn group comprised of upcoming creative multimedia graduates and alumni from the highly-regarded degree programme we run at the Limerick School of Art & Design.

Photo of our junior infant with July Homework.

I WANT TO HUG the entire staff of Clonmel Presentation Primary School for encouraging their students to fill in all the pages of their school workbooks--even after school has finished for the year.

I've watched our five year old pull out Jolly Phonics and her Maths Workbook because she has been instructed to finish all the pages before school starts after summer. That means whenever there's a rainy day outside and no paint inside, Mia begins in earnest. As you can hear in her Audioboo, she doesn't view the workbooks as a chore. She sees them as something she can do on her own to gain the sense of pride and accomplishment. When she finishes a few pages, she presents them to me in hope that they might open the prospect of a trip to the corner shop for something special. And she's normally right about that. She doesn't get those corner shopping sprees during the school year--gold stars suffice.

My photo shot above the Tidal Basin on the way to work.

WHILE REWINDING the sound track of my life, I remembered my first use of Two-Factor Authentication (2FA) while working in the largest office building in America. Back then, I wouldn't have considered blogging about it.

We used 2FA with cypher keys and it validated the identity or credentials of someone who wanted to put eyes on subject material. Today, 2FA is a process using two methods, such as a password and a physical card. Back in the early 80s, we had to punch in numbers in a keypad and then consult a written card for the date to correctly enter a key sequence behind a second door.

Behind those same doors today, the second factor now uses RFID along with biometric technology (such as fingerprint, face or iris recognition). Beyond the military, 2FA features in special information networks,financial or banking transactions. I use the simplest 2FA with my Chip and PIN card.

Panoramic shot of Corfe Castle rendered by the Nokia Lumia 925.

AFTER SHOOTING 100 images and videos with the Lumia 925, I've concluded it makes blues look deeper and it efficiently creates panoramic images. Both have resulted in more views of images than I would have expected in my Flickr photostream. 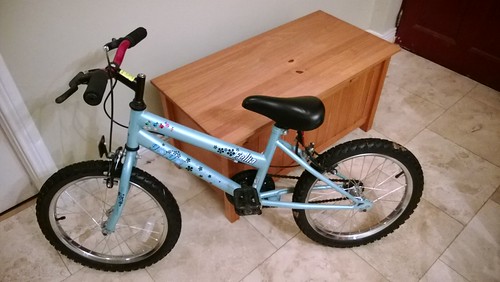 I REMEMBER hobbling around after my first summer on Schwinn balloon tires. Because I think Mia will want to remember her first bicycle journeys, I've started recording her adventures on two wheels. 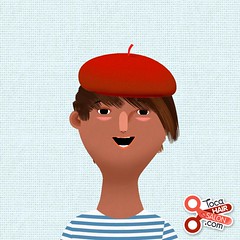 Lumia panorama of McPhails in Drogheda

I AM HAVING a blast with the free Nokia Panorama software bundled to my Lumia 925. I has generated several photographs deserving of their own galleries.