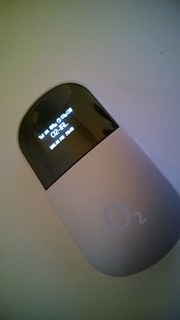 Photo of Mifi by @topgold.

THE SENSORS IN MY POCKET tell me I am spending a weekend where the strongest network connectivity is between people and not between devices. That is because in Cong, there are few places for me to see 3G over the air.

It's hard not doing this kind of electronic analysis because I glance at my phone's screen a lot. I think now that I already know that high speed data services will happen only where there is strong WiFi, I will let things unfold gracefully in the real network space--jointly considering interesting ideas mooted by thinkers who have congregated in Cong, County Mayo, this weekend.

If you're interested in the sound of the flow of things, I recommend searching http://audioboo.fm for #cong13 where some engaging audio clips will be shared.

[Bernie Goldbach snapped his O2 Mifi dongle while tapping this blog post onto his Nokia Lumia phone for mail2blog publishing.] 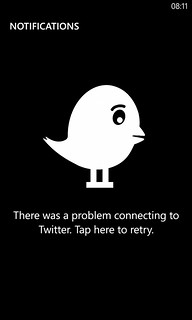 Screenshot by @topgold from Lumia.

LIKE MANY PEOPLE I know, I watch little numbers on my touchscreens that represent notifications from networks. Until recently, I would blindly tap and glance when a little bell announced Twitter was pinging.

But too many notifications erode the quality of work because they're as distracting as email toast. To prevent unwanted time sinks, I now tap my phone's battery saver on for most of my work day. The battery-saving step mutes notifications on my Nokia Lumia.

This procedure could be costing me opportunities because I might look disinterested or disengaged to people in my virtual circles. I need to risk those damaged prospects because I'm paid to be productive. And that doesn't mean I need to be at the short end of an otherwise effective notification channel like Twitter.

As an aside, I've reinvested more (uninterrupted) time in reading blog newsfeeds and in making private video clips that respond to student queries and family questions. 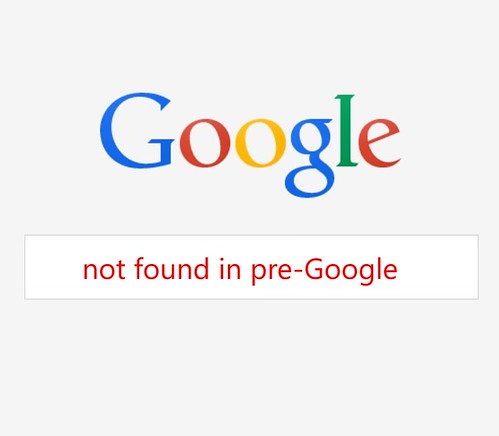 MY LIFE IN IRELAND started before any Irish Internet Service Provider's and this weekend I get to huddle with several Irish voices from that Web 1.0 era.

I HAVE USED DROPBOX on our creative multimedia curriculum since 2008 and now expect top students to have accounts on that very powerful service even before they start their first semester.

Nowadays, most students have Dropbox mapped to their laptops and they run the app on their Android, iOS, and Windows Phone devices. It’s quick and flexible. It just works.

Betting They Will Use Keyboards

I CARRY A FOLDABLE keyboard that our backseat drivers now use because I believe it is key to their future. I don't believe they can enter their working years without an awareness of keyboard shortcuts.

So we are starting with memorising the QWERTY alphabet. If our senior infant can lift her correct finger when I shout a letter, she can try to complete the same task for three more letters without reference to the keyboard. Four out of four correct finger responses gets her ten euro. She has not succeeded in this quest but she hasn't said my challenge is unfair.

If you want to get updates about this keyboard challenge, you can follow my blog's newsfeed for all the details. I promise to post the happy smile of victorious Mia whenever she completes four correct fingers-to-keys in a row.

[Bernie Goldbach snapped the back seat keyboard while using his Nokia Lumia.] 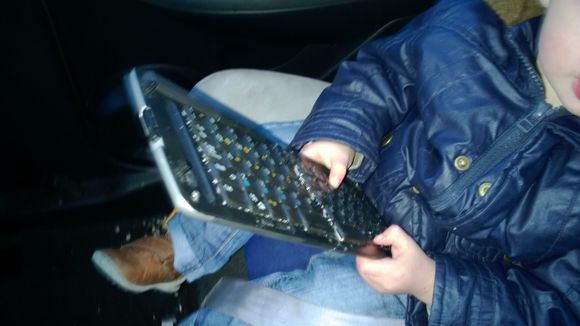 Core in My Pocket 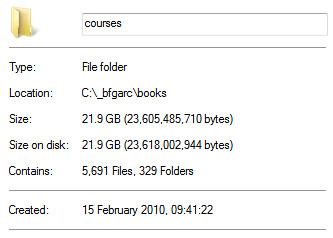 Screenshot by @topgold on Audioboo.

I THINK IT IS WISE to back up content and while listening to Big Rik explain his success with caddies and enclosures, I recapped some of my lessons on storage for Audioboo listeners.

Briefly, I've picked up old hard drives from discarded laptops and desktops, scraped them clean, and I'm now using them to store thematic content. One theme is the rich media by year (photographs, videos and audio clips). I'm also saving one hard drive for each child for each major life period. I've one for Mia from birth to junior infants and a separate one for Dylan covering his changes through those time periods. I've got a separate storage device for every year I've taught. They started minimalist and now include scans or document photos of student work through the years. I expect to find the work of the next Steve Jobs among some of that storage.

But the most elegant thing I do is save all my core content onto a micro SD card that I often carry in my pocket. That 32GB card could let me transport myself into a third level or corporate environment and present material relevant to any of the modules I currently teach.

The material on that 32GB card (screenshot summary above) is also dynamically backed up to CrashPlan Pro, a service recommended to me by Jochen Lillich. Its iron-clad functionality makes it well worth its subscription price.

Time will tell whether I've a durable back-up strategy. I wonder if anyone visiting might comment on how I could improve my back-up practises.

Hand in my Pocket

[Bernie Goldbach teaches creative multimedia in the Limerick School of Art & Design where he generates an unending ribbon of video minutes every year.] 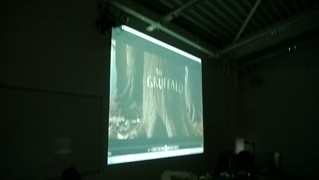 Photo of Gruffalo on screen by @topgold.

EVERY CHRISTMAS, our home dusts off The Gruffalo by Julia Donaldson. Today, I bring the framework of the monomythical story into my third level lecture hall where creative third level students will dissect it.

The book by itself provided hours of bedtime reading for the past three years. The stuffed animals licensed by Julia Donaldson to complement the book perch invitingly above the storybooks, colouring books and posters whenever we visit O'Mahony's Book Shop in Limerick. We have used mountains of pocket money to bring parts of the extended Gruffalo story to our daughter's bedroom. She sleeps better as a result.

The story of The Gruffalo is well-executed on several levels. Its narrative quality suspends our children in a fantasy land with so many nooks and crannies, some that do not appear on the pages of Donaldson's written work. A few of Mia's interpretations reimagine parts of the video, mashing up parts of Michael Jackson's Thriller with thrilling death-defying slices from Britain's Got Talent.

A well-defined pathway along the hero's journey makes The Gruffalo work for millions in its audience and also for animators and script writers who deconstruct it with me today.

[Bernie Goldbach introduces creative students to The Gruffalo in the Media Writing module in the Limerick School of Art & Design.]

Innovation in the Wine Cellar

Photo of Dylan and Mia by @topgold with Lumia.

I LIKE CREATIVE spaces because they always produce eureka moments. I found such a space in the old wine cellar of the Killashee House near Naas, County Kildare, Ireland.

In a series of audio clilps and annotated images, two dozen creative media students in the Limerick School of Art and Design are sharing their best zones for creativity. Sometimes those places mean music, other times they come with unique lighting or aromas. For me, the best moments have a rich tactile dimension. When I snapped the shot for this blog post, the tactile dimension came from bricks underfoot and a cut stone arched ceiling overhead.

I have a life-long quest involving the documentation of the creative spaces used by those whose work I read or hear every day. If you would like to share yours, please feel free to leave a comment below.

[Bernie Goldbach teaches creative multimedia at third level in Ireland. He snapped the Wein Kellar under the Killashee House while using his Nokia Lumia.]

Life with the Twitterbots 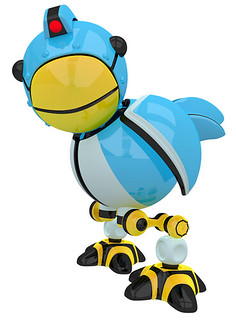 ONE OF THE BEST time-wasting values of Twitter comes in the form of Twitterbots who follow me. They bring equal measures of absurdity and serendipity while reminding me the Twitterverse never sleeps.

Twitterbots are also one of the most public manifestations of creative creative programming. A clever Python coder can recycle ideas that can be leverage for-profit or for charity. Year ago, people might have moaned about getting spam in their e-mails but I don't hear the same strident objections from people when they glance at their timelines and see a few Twitterbots chatting at them.

In fact, I think you might conclude Twitterbots are merely evidence of modern automation. They show up when you're talking about coffee, holiday destinations or software. They are as harmful as graffiti sprayed on the side of hoarding alongside a busy highway.

I'm sure Twitter will start to figure out ways of blocking the bots because in their current form, today's Twitterbots are riding inside the mainstream without paying for advertising time. But if Twitter starts to clamp down, they risk making this online conversation pit into a quieter, gentler place. And who wants that when you like bot such as Mark Sample’s My Favorite Things, which substitutes random words into Oscar Hammerstein’s lyrics while still keeping the song’s rhyme scheme?

Tweets Reveal the Real You

[Bernie Goldbach asks, "Strange midsize amateurs, loomed up with sites? These are a few of my favorite kites".]

I PUT LIAM DALY'S live streaming artwork on our dashboard while traveling on Ireland's motorway today, not knowing if the battery power on my Sony Xperia would handle the two-hour challenge.

I'm sending this short blog post upstream via O2-Ireland while two kids in the back seat pass on-screen Liam around and wonder. They wonder what he is painting and try to guess before the final product emerges. They wonder why he makes some sky red and other skies orange and fewer skies blue. They look outside at grey when I explain artists colour things.

They also wonder how he cleans his arms because they are splattered with paint. And they worry that paint will get into Liam's tea cup.

I expect to make an Audioboo when we flatten our mobile phone batteries, asking the kids what they've learned about eolai_paint on Justin.tv. From my seat, it's mesmerising and I suspect the 48 others on the stream think it is a fascinating use of streaming social media.

He is online through the evening Angelus on Saturday, November 16th and worth seeing on screen while streaming. 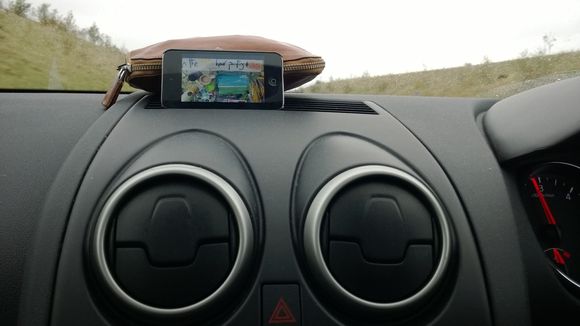