Inside View: Wundering in Ireland 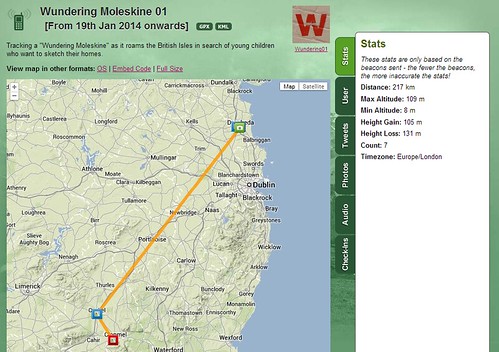 The Wundering Moleskine project has not launched officially but its fundamental premise is getting traction. The premise starts with a question most young people can answer, "Where do you live?" In some cases, the six to ten year old respondents don't know an exact address but that's not what goes in the Moleskine. The Wundering Moleskine is not an address book. It's a sketch book that young artists use to draw their representation of their world.

We hope each participant opens the book and sees sample work shared by those who came before. And then, we hope parents watch their children draw a major point of interest in their lives along with a playful representation of home as they see it. Some results will surprise the parents.

We want to put some real places on the virtual map, so we ask parents to check the book (it has the identity Wundering01 on several social networks) into a place on Foursquare that their child sketches in the book. Then when the sketch is finished, we need to get a digital photo of the work. We prefer the photo gets placed on Flickr, using the Wundering01 Flickr account. Finally, we would like to hear the artist's statement in their own words. We're using Wundering01 on Audioboo to capture that.

Oh, I forgot a few things. There's a playful map in front of the book. It should be pricked with a pin to represent where the book was sketched. And if the artist wants to take something from the flap of the Moleskine, we ask that something be put in the back of the book before it continues its journey.

We know some parents aren't technically savvy so we can create some of the social signals remotely. For example, we can check the book into Foursquare without actually being in the place. We can ring and record an artist's statement over the phone. And we can take the snapshot of the completed artwork via email from the parent. However, it's much easier--and more authentic--if all these little social signals come directly from the local area where the creativity occurs.

The Wundering Moleskine remains in alpha for the moment. If you are reading this in Ireland or the UK and would like to participate, please drop a comment on this blog post or contact @Wundering01 directly on one of the major social networks.

Young Mia explains how it works in the audio clip below.

[Bernie Goldbach is co-ordinating third level activity around the Wundering Moleskine as part of the creative multimedia degree programme in the Limerick Institute of Technology.]