Inside View: Memories of #wwfof on my Maps

Memories of #wwfof on my Maps 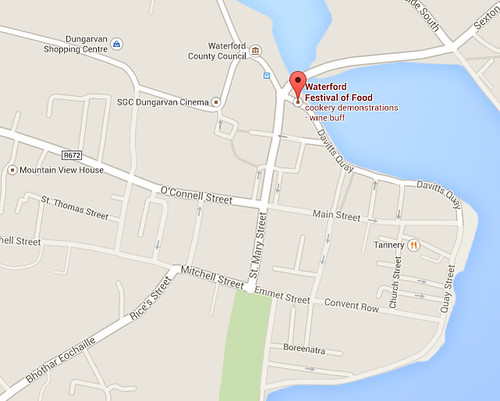 THE WEST WATERFORD Festival of Food was the first event I attended in Ireland where my handheld maps helped me discover some real gems. I hope other Irish festivals follow their lead.

Before we drove to Dungarvan, I had already discovered the food festival was on Google Maps (see above) and that meant it would be on the Sony Xperia I used during the drive. Unfortunately, that particular handset needs to be rooted because its power savings routines don't kick in like before and I rarely get more than five hours between recharging it.

My Nokia Lumia found several #wwfof venues inside Here Maps and every one of those venues (proper establishments or temporary marquees) could be identified by pinpoints and then shared by SMS or as social networking updates. If the Xperia had held its power, I could have used Glympse with a similar effect.

Foursquare found people talking about the Festival of Food as well as checking into a few of the venues. If more people used Foursquare during the festival, I know I would have received several high quality recommendations. As it stood, the Foursquare recommendations pointed me back to cafes and bakeries I had visited in the area before. Those were handy reminders to return to venues I've enjoyed every time we're in the area. My handset will be able to give me recommendations I have personalised long after the #wwfof Twitterstream and Facebook comments fade into the ether.

The best fish and chips I had on Davitt's Quay wasn't a venue in TripAdvisor, so I added the Anchor Bar with my take on lightly battered cod.

Our day trip to the West Waterford Festival of Food encouraged me to create categories on my handsets for restaurants, coffee and other favourites. I think every festival organiser in Ireland would enjoy greater footfall by ensuring agendas and venues have clear geotagged identities. The process made our time in Dungarvan much more engaging and I've saved every place we visited as a favourite for a return trip this summer.

Memories of #wwfof on my Maps

THE WEST WATERFORD Festival of Food was the first event I attended in Ireland where my handheld maps helped me discover some real gems. I hope other Irish festivals follow their lead.