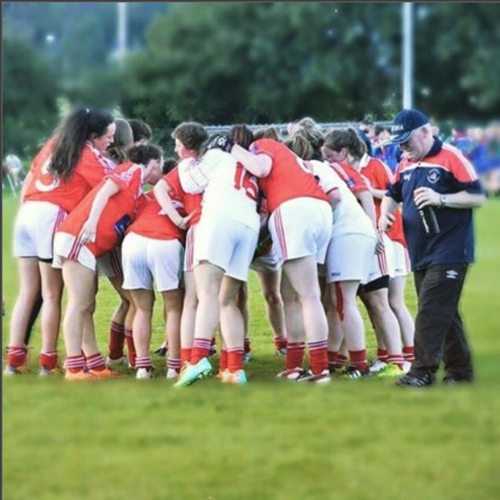 My most noteworthy achievement would probably be winning an Under 16 Camogie All Ireland with Limerick. I was in charge of taking frees that evening in a very wet and windy Tournafulla GAA pitch but thankfully my scores made sure that we won the match outright. Myself and a fellow teammate were honoured by our club for attaining such a high achievement and we also got to meet Christy Cooney, GAA president at the time.

After finishing with the under 16 team, I decided to leave and concentrate on Gaelic football. From doing this, I managed to obtain a place on the Limerick Minor ladies football panel as well as becoming a member of my football clubs' senior panel. I played with the minor team for two years before reaching the maximum age and following this, I progressed onto the intermediate county panel- the most senior ladies football panel for the county. With my inexperience to the panel, I do not get much game time as of yet but I did play a full 60 minutes of a crucial championship match as well as being a member of the team when we reached the Division 4 League Final in May 2015.

At the same time, I was playing soccer with Regional United. Whilst at the club I was lucky enough to be given a place on the Limerick FC ladies under 18 team. In our first year we managed to reach the semi final stages of the All Ireland district competition which saw us being noted as the fourth best team in the country. After 1 year with this panel, I was called up to play with the senior ladies team which my very first club, St. Patrick's AFC, took great pride in. The chairman of the club got onto me to arrange an interview about where I had started and how I got to where I am today in soccer. Although it may not seem like much, it was published in the local parish newsletter which my family took great pride in.

I am very grateful for the opportunities I've had in sport so far and hopefully I can add to them within the near future.

You can find an article about the All Ireland soccer competition on the LWSSL (Limerick women's and schoolgirls soccer league) website. See the links attached below.

To summarise my personal bests in 3 simple sentences, I would say:

1. I have reached the highest honour in Camogie in Ireland.

2. I've been fortunate enough to be selected for a talented county soccer team.

3. I've trained hard enough to gain to skills to be good enough to be selected for the Limerick county football team.

[Janet O'Carroll is completing a BA degree in business with an emphasis on sports management at the Limerick Institute of Technology. You can follow her photostream @JanetOC09on Instagram.]