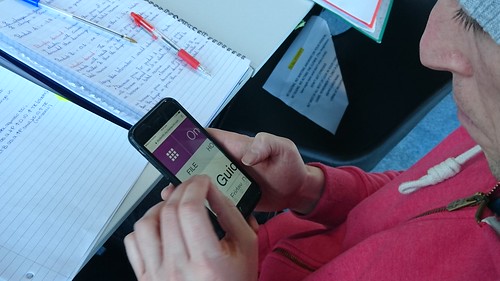 ONE OF MY biggest accomplishments of the 2015 winter semester happened while watching third level students use OneNote to review pertinent topics in Human Resource Management. I taught 29 students in that subject and every time I opened OneNote Online, I would see three to eight of them poring over notes.

Our students are in revision mode at the moment and that means OneNote is getting a rigorous assessment. Students can review PowerPoint presentations, view revision documents and collaborate in real time with both students and lecturers. I organise my course notebooks into sections that correspond to major parts of the syllabus. OneNote looks like a traditional ring binder, similar to the views I once had in Lotus Notes.

Most of my students use OneNote as a road map, synchronising their handsets when using campus wifi, then reviewing materials at home. Those sync sessions don't automatically download the PowerPoint decks, however.

Only a few lecturers in the Limerick Institute of Technology use OneNote and I don't think any of them use the shared classroom features. It is probably too early in the adoption curve because LIT only recently migrated major services to the cloud. And like many of my colleagues, I still have legacy learning materials inside Google Drive, on Evernote and buried in the digital morass of my removable hard drives. But having seen how clever the Windows 10 search works with my cloud (and connected) assets, I have relinquished control over my precious learning materials by dropping the best parts into OneNote.

Unfortunately, many of the third level lecturers I know won't migrate to OneNote or OneDrive because they fear loss of their intellectual property. There exists a natural competition between academic departments and that competition effectively stymies the "Share and Share Alike" model that sustains my practise.

I use both Microsoft Online and Office 365 (O365). The O365 offerings depend on Microsoft Azure, a service that collapsed a few weeks ago. During the winter academic term 2015, the LIT O365 service had a lot of latency for me when working on the remote campus in South Tipperary, possibly because of legacy networking connections that I hope will go away.

File sharing with people outside our LIT.ie domain doesn't happen on our O365 setup--but it was possible in the earliest implementations last summer. I've never had email problems with O365--but I glance into my "Sent" and "Draft" folder because I use O365 on my handsets while on EDGE services in remote locations.

Generally speaking, O365 works elegantly for me on iOS, Android and Windows Phone. That's also the opinion I hear from students who use their smartphones and tablets for learning. It's a lot faster to tap into OneNote and OneDrive than it is to tap and read several hyperlinks in Moodle. Since I'm aware of these preferred learning pathways, I'm trying to reduce the clutter on screen so that OneNote for Education becomes a preferred touchpoint for third level students I teach in Ireland.

If you're among the precious few using OneNote for Education at university level, please get in touch. I'd like to see how people use OneNote to distribute rich media resources and to provide HiQ audio feedback to individual students. You can find me @topgold on all good social networks.

[Bernie Goldbach is the senior drone pilot and creative multimedia lecturer flying above three campus locations at the Limerick Institute of Technology with OneNote in Education.]

Posted at 11:36 AM in Best Practise | Permalink

ONE OF MY biggest accomplishments of the 2015 winter semester happened while watching third level students use OneNote to review pertinent topics in Human Resource Management. I taught 29 students in that subject and every time I opened OneNote Online, I would see three to eight of them poring over notes.