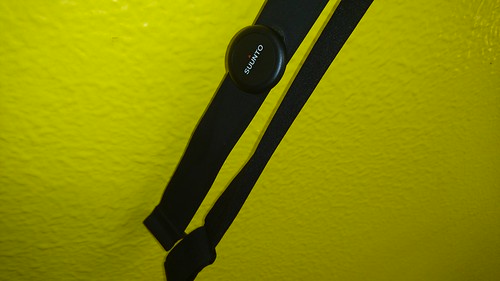 I'M STICKING TO MY fitness resolution because I often wear a heart rate monitor under my moobs to remind me what being fat feels like. And I'm also purging a lot of notifications from my life as part of a digital detoxification programme.

The two initiatives point to the bigger issue of me being over-saturated with the digital world.

Wearing the Suunto heart rate monitor feels like I'm wearing a personal trainer. It feels like a giant rubber band. Because I often wore it while being coached by Evan Fitzpatrick and Paul Killeen, I can see their faces and hear their voices pushing me to new suffer scores on Strava, the fitness tracking system I pay to use.

To afford both the Suunto Ambit 3 and my Strava membership, I've had to cut back on other services. So I started purging several previously important subscriptions from my life--more about that in a blog post later.

I kill at least one iOS app a week from our iPhone 6. I figure if we haven't used it in a fortnight, it's part of the dead pool. And I do the same on my Xperia Z5 and on my Lumia 1520.

The biggest purge is with notifications on the smartphones we own. I don't want to feel vibrations or hear tones except when my action is important to the survival of the human species. So I will let my phone's alarm ring at 0510 in the morning. That ensures I'm warmed up before the sun rises so I can complete a 2.7 km jog, take a shower and eat an omelette before pushing off to teach my first class 52 miles away from home.

Something must be happening with other technology addicts as well. Sales of the iPhone 6S and the clever 6S Plus have slowed so much that Apple has scaled back production by 30%. And sales inside the Apple app store have slowed down as well, even as new devices such as the Apple TV and Apple Watch appear in homes of friends. [1]

I enjoyed looking at young scientists showcase their expertise by coding for the internet of things, knowing that outside the exhibition hall sales of smart home devices have fallen well short of expectation, according to Accenture's annual Digital Consumer Survey, published last week. [2]

I feel tech overload. My eyes hurt if read backlit screens after 9PM at night. I allow myself screen time on a Kindle Voyage after the Nine O'Clock News because it doesn't burn my cornea. I shut down data connectivity to my phone when it's in the bedroom because I believe no earth-shattering events will happen when I'm sleeping. And I've taken a page out of Dave Delaney's Play Book by annotating a semester's worth of goals in a pocket-sized notebook. [3] That little book is powered by a Cross Pen and it connects my ideas by Polychromos shading and playful doodles.[4]

As the final reports from CES percolate through my newsfeeds, I think a new reality has started dawning for the tech advocates who I respect. It's an awareness that best tech is silently sentient and the most productive workflow involves sophisticated single-taking. I expect to evolve my work flow into a mix of quiet time, high intensity physical exercise, intense personal classroom sessions, quiet reflection and a dose of sophisticated virtual collaboration.

[Bernie Goldbach is the senior drone pilot and creative multimedia lecturer on the staff of the Limerick Institute of Technology.]

4. I vouch for Moleskine journals powered by Polychromos pencils.

I'M STICKING TO MY fitness resolution because I often wear a heart rate monitor under my moobs to remind me what being fat feels like. And I'm also purging a lot of notifications from my life as part of a digital detoxification programme.

The two initiatives point to the bigger issue of me being over-saturated with the digital world.