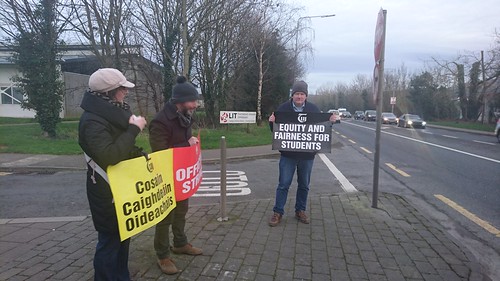 Photo snapped at the entrance to LIT-Clonmel.

ALONG WITH MORE than 3,000 other institute of technology lecturers, I spent the day on strike over a range of critical issues within third level in Ireland. I talked to several local people who stopped to ask about the issues and hope they tell politicians calling at their doors for votes about the need to replenish the higher education sector.

We need to expand the Clonmel campus where I teach. Its student population will exceed the space available for lab work when a new cohort of students arrive in September 2016. But there's no authorisation for capital spending for the campus. The Union of Students in Ireland know this and our students point how how they continue to feel the effects of anti-education cutbacks of recent years.

During the "fiscal emergency" of the past five years, funding for the institute-of-technology sector was cut by 35 per cent. But during that same time period, student numbers on our Clonmel campus increased by more than 30 per cent. We've been authorised to hire new staff to teach new programmes but those staff have different terms of employment than the more senior members enjoy. They teach longer hours and start at lower salaries with less secure employment, meaning even if they get to progress through incremental pay rises, a major variance will exist between what they're paid after five years of service and what a similar lecturer would have enjoyed before 2009.

A rising student population continues into third level education without the required funding to maintain appropriate staffing levels. This means several of the Clonmel staff have to travel 50 miles to Limerick to fill gaps in the academic schedule there.

I have larger class sizes now--more than 30 students in two different modules--which puts pressure on the kinds of immediate feedback I can offer during tutorials and lab periods. But I know university staff with 300 people in their lecture halls so we're still offering better one-on-one service than many students get while stuck in larger class sizes.

The pupil-teacher ratio metric links the number of teachers at second level to the number of students, but no such linkage exists at third level. To an analyst in the Department of Education, there is no problem with staffing levels in the institutes of technology. But in the classroom, there is a significant erosion in my ability to teach 21st century skills to an ever-increasing number of students. This is my personal experience and one of the primary reasons I supported strike action. I hope it's an issue for the doorsteps in Clonmel as politicians start making their rounds seeking votes. When voters tie their first preferences to candidates who understand the critical need to increase financing for capital expenditure in education, we might finally get a commitment to build additional classrooms and lab space on the Clonmel campus. There's no plan to create a space where all students taking courses on the campus can meet together. The only way that can happen is to have everyone stand in the main lobby and canteen, assisted by an amplified sound system.

Since its establishment less than 20 years ago, the third level institutes of technology in County Tipperary have contributed to social, economic and cultural development in the southeast. A lot of this success can be linked to the dedication the staff has to ensuring a high-quality experience is offered to students even when being undermined by short-sighted, steep austerity cuts. The money simply isn't flowing into third level and the statutory funding agency, the Higher Education Authority, appears to roll over and accept the wilful destruction not only the Clonmel campus where I am assigned to teach. Instead, the HEA wants to force regional institutes of technology into a technological universities model. We experienced the same sort of amalgamation when the former Tipperary Institute was absorbed into the Limerick Institute of Technology. These kinds of consolidations only benefit the larger institutions where the management sits. Ask any civil servant who played a part in third level or county council amalgamation in the past five years and you will hear specific evidence of assets being stripped or wound down and offices realigned only to serve the purposes of managers who sit in the gaining institution. The gravitational pull of larger institutions in larger urban areas always increases with consolidation. I teach these case studies as part of management modules in LIT and know this is the way most management takeovers work. From what I've seen, the natural tendency for senior managers is to dramatically reduce the remote provision of academic programmes, safeguarding the home campus from cuts. We have fought this sort of battle in third level in Clonmel because we believe the south Tipperary catchment area should be offered access third level at or near one’s home. This is essential for mature students who have children in primary school and working spouses.

Thankfully, the Technological Universities Bill never made its way to the floor for a vote during the past Dail term. The bill would have imposed significant change on the third level sector without any sort of commitment to proper resourcing. In the case of Clonmel, the Technological Universities Bill could have forced the sale of the campus to the Tipperary Sports Partnership, followed by a move to a city centre location. If the proceeds of the sale were too meagre, the resultant move would mean trying to scavenge funding authorisation from a general allocation--without the Clonmel campus acquiring any sort of priority treatment. In my mind, getting "technological university" status is merely an cost-saving tactic. It will not enhance global academic reputations because you need real investment to ensure quality third level education.

In the weeks ahead, the Teachers' Union of Ireland will circulate a ballot on how we should engage with the Department of Education. The goal on today's picket line and in future discussions is to get a sustainable, practical, manageable resolution to funding third level in Ireland. There are no quick and painless fixes. It will take an increase in funding for capital expenditure and a recognition of the increased productivity third level staff have offered while simultaneously taking a cut in pay.

** Bernie Goldbach has taught at third level in Ireland for 12 years. This blog post represents his opinion and not his employers.

Photo snapped at the entrance to LIT-Clonmel.

ALONG WITH MORE than 3,000 other institute of technology lecturers, I spent the day on strike over a range of critical issues within third level in Ireland. I talked to several local people who stopped to ask about the issues and hope they tell politicians calling at their doors for votes about the need to replenish the higher education sector.