Inside View: Reflecting on Semi-Permanent Audiologs 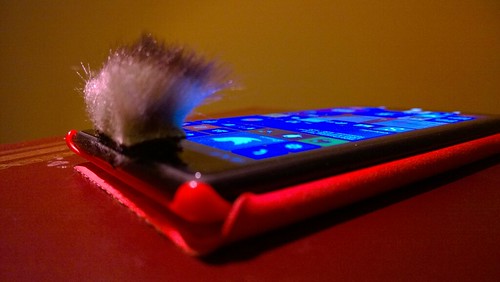 More people listen to me on Audioboom than on any other audio network. I've uploaded 2200 clips to Audioboom since 2009 and seem to register more than 40 listens per clip. Statistics show my clips have been heard more than 100,000 times. I listen more than I record. A lot of my played clips are due to the way Twitter handles the playbacks. A simple process allows my content on Audioboom to embed directly to Twitter. Some people play those clips directly when on Twitter's timeline but they don't listen all the way through. It's more like an echo chamber than a real conversation. I don't think I've ever had a friend tweet about my audio and only a few listeners use the commenting feature on Audioboo to continue a conversation there.

During the past three months, I've  started using Anchor.fm, a free iOS app. I get two minutes to create clips on that service and listeners can make one minute replies. I enjoy hearing Jenafer Elin, Christian Payne, Justin Finkelstein and Wolf Shipon make waves. I've embedded an Anchor clip below and you will be able to listen to people who respond to the wave I started as time goes on.

My initial intention when starting with Audioboo was to create audio content to complement each of the lectures in the academic modules I teach in the Limerick Institute of Technology. I searched Google for my name and audio and my LinkedIn profile came up first. That result reflects the fact that Audioboo management gave me an education channel that would perfectly suit this purpose. I want to restart that channel and create helpful five minute clips for each of the four autumn semester modules I'm scheduled to teach. Students have told me they have learned important information while listening to targeted educational material when working on their part-time jobs. I plan to edit the audio clips I make by including ID3 tags and cover art with the snippets. When shared with students on the campus OneDrive or on Moodle, the meta data on the audio clips increase the discoverability of the audio content. I also plan to cross-post selected content into the "compose" portion of my blogging software on Typepad and on Drupal.

I've a workflow that makes easy work of creating short audio clips. Down through the years, I've cobbled together several methods, with my Nokia E90 in 2009, an iPod Touch in 2012, Lumia phones three years ago, a iPhone 5C in 2014 and an Xperia Z5 today. I actually prefer to use Audioboom's mobile web site to upload most of my clips. However, the fastest way to generate and share handheld audio with the Anchor iOS app. All a teacher or a storyteller needs is a good data connection and the free iOS app.

I like to listen to audio by downloading clips using Pocketcasts. [2] However, Anchor.fm does not offer RSS so I'm stuck with its app if I want to hear conversations (called "waves" by the founders) unfold there. I don't like being constrained in a silo because I believe sound waves need more than a single listening post to be truly enabling.

Audio blogging with Anchor.fm is simpler than taking a phone call because you can hold your iPhone up to your ear and record an idea without actually talking to anyone. Some of the most interesting waves I've heard on Anchor are actual back-and-forth conversations because when people respond to a wave on Anchor, their voice is added to a string of preceding voices. It's very elegant and the playbacks often cache inside the app and play back for me in a smooth flow even when I'm well outside of 3G coverage.

Back in the early days of Irish blogging, Damien Mulley created a category for podcasting at the Irish Blog Awards. In 2008, I thought my practice of creating simple podcasts meant I was part of an evolutionary movement in blogging. If I had configured a speech-to-text conversion on top of my Audioboo account, we could have created a full-fledged primary school blog with the items our daughter started sharing as a four-year-old. Mia is eight now and has developed a confident speaking style .

Through her primary school days, the purple Audioboo icon on the iPod Touch decayed into a light blue Audioboom icon and the community content became more commercial and stilted. However, she showed her after-school friends how to use the app and by being a pathfinder, she could lay claim to being Ireland's youngest audio blogger with her own playlist. There's real empowerment in having a self-confident manner when talking. I think the casual and reflective audio clips created by Mia go a long way to helping her form a self-concept that will manifest itself in very positive ways as she explores other technologies while growing up.

During the four years Mia dabbled with audio journaling, YouTube Creators became a thing. In many circles, vlogging with images eclipsed blogging with text. People are paid more to create video clips that support clients. Services like Facebook Live, Periscope, Blab, Google Hangouts and Snapchat have caught the attention of brands and marketing agencies because people believe video is more compelling than the spoken or written word. But at its core, all these content channels are most effective when they become syndicated story-telling. You need to be able to find the content in clearly defined places on mobile and on big screens. And your work needs to be noticed by awards organizers.

It's also wise to sort out a way to save the audio clips, the images used for cover art and the short outlines that describe the audio content. The most elegant process I've discovered involves using several automated systems to back up working files along with finished audio clips. I used to do this by stringing together old hard drives from discarded laptops and desktops. Then I started buying a terabyte of removable storage every year and dragging content onto those USB drives. I trying to save one hard drive for each child for each major life period. I've one for Mia from birth to junior infants and a separate one for Dylan covering his changes through his pre-school days. I've got a separate storage device for every year I've taught. They started minimalist and now include scans or document photos of student work through the years. I expect to find the work of Pixar animators among some of that storage.

The most elegant thing I do is save all my core content onto a 64 GB micro SD card slipped into the side of my Sony Xperia Z5 phone. That little memory card includes all my third level teaching material along with all my Slideshare decks. The micro SD card is my mobile ePortfolio. The material on that 64 GB card is also dynamically backed up to CrashPlan Pro, a service recommended to me by Jochen Lillich. Its iron-clad functionality makes it well worth its subscription price.

History has shown that I continue to be knee-deep in personal audio recording. I'm doing it because I enjoy sharing thoughts AND because my workflow has become more efficient. I hope I'm leaving behind a legacy whereby my grandchildren will be able to rewind my voice simply by scrubbing a timeline across the audio clips I've archived.

+++ Bernie Goldbach teaches creative media for business on three separate campus locations for the Limerick Institute of Technology. The photo accompanying this post shows a Lumia 1520 with a spoffle to combat wind noise.

Posted at 07:58 AM in Best Practise | Permalink