BACK IN 1997, I started computer labs with a task list published on my blog. I'm doing the same thing in 2016 as I begin to show a new cohort of sports management students how to quickly move from desktop Office to collaboration inside Office 365. There's a task list below the fold for people who are curious about how I begin the OneNote on-boarding process with new converts. Several of the activities specified in the task list generate follow-up cards automatically inside Contactually, the CRM system I use with hundreds of students every year.

WHEN I REVIEWED a set of tools on our Office 365 campus that I use to improve my third level teaching practise, I realised I should disclose to students how those tools monitor their activities. I'm thinking about how often I see disclosure statements on popular websites and how conscientious several education thought leaders have been when cautioning about the undesired effects of learner analytics.

I think it's valuable to know how active different learning zones are and I also believe it's important that I know who may need help because they fail to show requisite activity in and around learning materials their colleagues use to master important practical objectives.

I've surfaced six specific tools to offer explanations to my students about how I'm using the tools to track their progress.

THOSE CLEVER PEOPLE on Boards.ie confirmed for me that I could run Amazon Echo in Ireland and that means Echo Dot would fit into my lifestyle quite nicely.

Our 8yo daughter already uses her voice to look up things on the family smartphones so I think we could ask Mia to manage a few Echo Dots as part of an array in a smart hub for our home. I like the idea of a house that can listen and respond to our queries.

Working Better with Humans. And you?

IT'S FRIDAY AND I use 12 minutes to recap the week. This past week, I believe I got along better with humans so I'm looping Björk as a testimony to my achievement.

Continue reading "Working Better with Humans. And you? " »

I WONDER if I should startle my primary school children with discussions about what other people can see and hear. After I made a short audio clip on Anchor (an app you can get on Android and iOS) about this idea, I started to wonder if I might be creating a bigger problem by opening a can of worms years before it should be considered.

Much of the rage around young people and computing concerns how Facebook, Google, and Microsoft may collect information from school kids using web browsers and apps. The potentially sensitive data could eventually make its way into the hands of third-party advertisers. The result is a little creepy for many young people and their parents.

AFTER ONE WEEK back in an assortment of third level Irish classrooms, I definitely feel like I can point to major breakthroughs in managing large workloads of academic material. And my job satisfaction is directly related to the smooth running of Azure services that push Office 365 facilities to my Surface and into the hands of my 89 students. 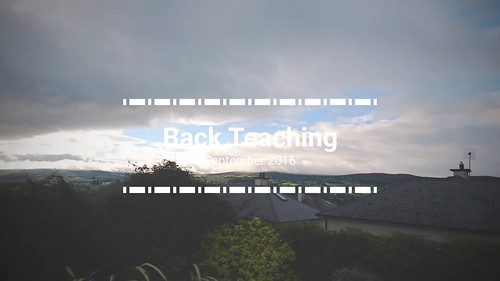 While I was teaching, my Xperia Z5 phone cobbled together a few images and created a little video clip that effectively summarises some of the week's activities. Although I could have edited the content to show only the stuff I did at work, I think it's important to let the clip generate a flow that seems to demonstrate I've started to get a better work-life balance.

Another Year with @MSoneNote starting with exporting Class Notebooks

I AM STARTING MY FOURTH semester using Class Notebooks and have learned from the experts [1] the importance of exporting and archiving old data as one large PDF or XPS file. Because of all the practical work contained inside those OneNote files, I have committed to saving those archives for at least seven years, a statutory limit for some forms of electronic data.