Inside View: Algorithms in my Personal Decisions #MIS

Algorithms in my Personal Decisions #MIS

Like all of my students, I have a mobile-fueled lifestyle and that means I use information served up through mobile browsers and applications as integral parts of my personal DSS. I bought handsets and tablets that I carry with me to do my job--like the venerable Lumia phone in the photo below. If you flip backwards through the 20 years I have blogged you can see that I update my blog as often from my mobile phone as I do from a desktop. In fact, I have not had a desktop computer since 2010. 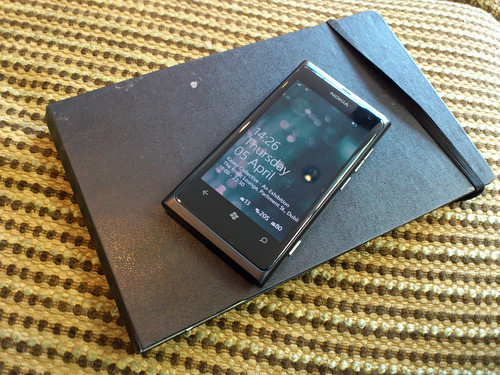 I depend on my DSS to guide me while I commute and walk. I hear the advisory tones of calendar alerts and special notifications from Slack and my primary email account during the day. Since 2008, the last year I had a new Nokia phone, I have used several mobile features to confidently guide me through packed agendas and to serve an academic community while teaching on three separate third level campuses during the same week. Currently, my personal use of smart mobile devices involves fewer interactions with people and their messages and a higher use of location-based services. [1]

When I'm underway now, Google Maps knows whether I will arrive at my next teaching destination in time. Waze lets me advise people where I am and sends updates. When I'm looking for special goods and services, Facebook, Foursquare and Google Maps can tell me the exact address and phone number. Google Maps often shows the closest off-street parking locations.

When I read newsfeeds on my phone, I can tap different icons to share selected information to different social networks. One of those networks is a collaborative research location powered by Inoreader where the information I curate goes directly into student readings powered by OneNote.

Perhaps the most significant use of my handheld DSS is my use of crowd-sourced social media. I can read what real people think about products and service by looking at venue ratings and product scores. When displayed as Amazon ratings, I can use electronic showrooming as a method of determining what to buy. I've tried to keep all these data points as one separate layer in my life, because I'm increasingly aware that my Personal DSS is code-dependent. Because I am influenced by the number of stars in a rating or the number of likes from people I know, I often worry that I'm living an algorithm-dependent lifestyle.

Algorithms optimise everything. They make decisions easier. They cut through chaos. But a little voice inside me warns that the algorithms I use can be distorted by a crowd effect. They can perpetuate bias, create filter bubbles, and erode creativity and serendipity. So I'm aware of that happened get, especially in the presence of my in-laws who have never had a broadband signal.

Under every part of my Personal DSS runs an instruction set that helps me solve a time-sensitive problem. I decide what to do with my time based on calendar alerts. Every look-up I perform triggers an algorithm based on my past preferences. My e-mail goes into folders, thanks to algorithms. Smartphone apps are nothing but algorithms. Amazon serves up excellent enticements based on my shopping history and searches. Google Maps suggests best routes based on live traffic algorithms. Everything I see at the top of my social media news feeds comes to me via algorithms.

Algorithms help our Amazon Echo Dot respond to voice commands. Algorithms sort my photos and automatically create a video clip for every day of my life. I suspect many elements of my Personal DSS now uses self-programming algorithms and that means several of the core Decision loops in my life are written by algorithms that revised themselves.

Researcher Andrew Tutt has called for an “FDA for Algorithms,” noting, “The rise of increasingly complex algorithms calls for critical thought about how to best prevent, deter and compensate for the harms that they cause …. Algorithmic regulation will require federal uniformity, expert judgment, political independence and pre-market review to prevent – without stifling innovation – the introduction of unacceptably dangerous algorithms into the market.”

So as I reflect on my Personal DSS, I'm aware that algorithms have spread into my life. I have become a data point that businesses and governments can analyse. And as I review my weekly to-do list, I'm aware that behind the scene sits machine learning that is thinking about how it might make next week's DSS more incisive for me. That's because advances in quantum computing and the rapid evolution of AI and AI agents embedded in systems and devices in the Internet of Things will lead to better predictions of what I should do with my time, influencing and who I should communicate with and what I should buy.

This could be troubling so I'm examining all facets of my personal DSS to ensure I don't become constrained by the "surveillance capitalism" described by Harvard's Shoshone Zuboff. But that's a subject for another post after I finish reading about the future of work and power. [2]

[Bernie Goldbach teaches creative media for business in the Limerick Institute of Technology. He wrote this post using Bear Writer on his iPad Mini and copied it into the Typepad blogging platform.]

1. I made an album of those venerable Nokia Lumia handsets.

Algorithms in my Personal Decisions #MIS

Like all of my students, I have a mobile-fueled lifestyle and that means I use information served up through mobile browsers and applications as integral parts of my personal DSS. I bought handsets and tablets that I carry with me to do my job--like the venerable Lumia phone in the photo below. If you flip backwards through the 20 years I have blogged you can see that I update my blog as often from my mobile phone as I do from a desktop. In fact, I have not had a desktop computer since 2010.