Inside View: Let's Connect Over a Meal

Let's Connect Over a Meal 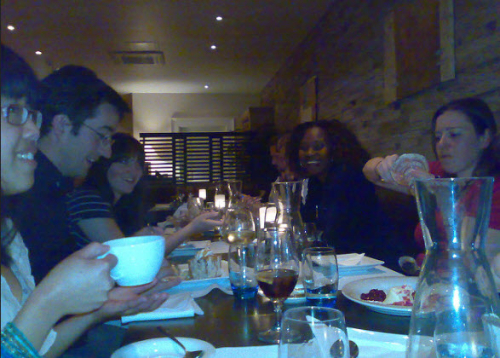 TEN AND A HALF YEARS AGO, Ewan McIntosh visited County Tipperary to share his perspective on education. As expected, we learned a lot. And as many thoughtful people know, breaking bread is one of the most effective ways of fostering a collaborative connection. R. Wolf Shipon makes this same point in an open letter he wrote to fellow psychologists immediately after the Pittsburgh synagogue massacre. I'm sharing Wolf's comments from his Facebook post.

It is all sadder than it is interesting, but I would like to propose some shifts in perspective that may be helpful to someone who is reading. Maybe, as influencers, we can help others. That is at least the proposition. I am keeping brevity in mind, and yet it is impossible for this.

1) George Washington, in his Farewell address (written in collaboration with Alexander Hamilton), gave a stern warning about factions (political parties) being antithetical to the goals of unity. No one listened. It has become worse, and worse still with foreign interference and the fact that all profitable media, including “social” (more on that next), relies on sensationalism to “win eyeballs.” So the commercial interest lies in exciting passions, which, in several Eastern traditions, is a terrible thing to do to the human being. I agree.

We might not need political parties or polarized media outlets anymore. We may need a new national dialogue about unity and news that is free of opinion, instead of the media nightmare in which we live.

2) “Social media” is truly anything but. In fact, we have increasing evidence that people are losing both social skills and anxiety coping skills as a result of overuse of social media technology. People are becoming more anxious, isolated, and depressed. People are less involved in community activities. They are far more likely to have high amounts of screen time as a substitute for these activities.

A friend of mine was visiting from Los Angeles the other day, and he proposed over breakfast that what we really need to do, to have people get along, is have them eat together. The simplicity of this idea was its brilliance. I was reminded that as a Freemason I was admonished, along with the other brethren, that we were not to discuss politics or religion in the lodge. Oldest fraternity in the world, enforcing the wisdom of the ages — and good manners, which are not taught on “social media.”

“Social media” is pseudo-social, by the way. I’m not going to write further about it, but that’s free for your use, if you want it.

3) Polarized rhetoric, even against evil, is still polarized. I’m reminded of Aikido, which teaches that your role is not to harm your opponent. Your opponent (your attacker) is out-of-control, wants to fall, and needs your help to fall safely to get back in control. You do not use force against his force. You step aside and/or redirect his force. When he grabs you, you do not tense up. You relax. This causes him to relax, automatically, and then you slip out of his hold and bring him safely to the floor.

We need Aikido in our human relations. Our rhetoric should be about our shared humanity and commonalities. When someone goes on the attack, we should not tense up and attack back. Just like in Dialectical Behavior Therapy, we should validate the feeling (not the behavior) and then seek understanding, through nonjudgmental stance, description, generosity of spirit, kindness, connection points, empathy, etc.

We have become, instead, shrill.

We can do better. We know how.

We just need to teach people how to use these skills with one another, and reject our tendencies (our passions) to form factions and fight.

We do not have to fight. We need to make peace. We need to open our ears. And we need to learn what not to speak about — learn that music is defined not just by the notes but chiefly by the rests, or silences — in order to truly create change.

These are but a few ideas that will not resonate with everyone, but in the face of true evil, we cannot allow ourselves to be dehumanized.

I am saddened by the loss of life.

We can do better.

R. Wolf Shipon is managing director of Inner Wellth LLC. He occasionally shares his thoughts on Facebook and aboard a kayak while talking on YouTube.

The photo at the top of this blog post was snapped by a Nokia E90 in The Bailey of Cashel, County Tipperary, Ireland.

Let's Connect Over a Meal

TEN AND A HALF YEARS AGO, Ewan McIntosh visited County Tipperary to share his perspective on education. As expected, we learned a lot. And as many thoughtful people know, breaking bread is one of the most effective ways of fostering a collaborative connection. R. Wolf Shipon makes this same point in an open letter he wrote to fellow psychologists immediately after the Pittsburgh synagogue massacre. I'm sharing Wolf's comments from his Facebook post.