Inside View: Discovering I Like the Worst Mac & Cheese 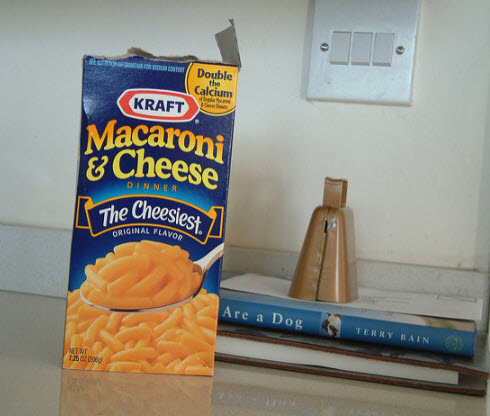 I HAVE GIVEN MY Mac and Cheese addiction to my Irish-American offspring. Those two pre-teens like it more than pizza. Now I discover from Maura Judkis in the Washington Post [1] that our family macaroni and cheese of choice isn't haut cuisine.

Maura "set out to try some of the most popular store-bought macaroni and cheeses (and) quickly learned: The difference between a good mac and cheese and a bad mac and cheese is as vast as the ocean is wide. And after a few tastes of these mac and cheeses, we wondered whether that ocean was actually orange and whether we were drowning in it".

The WaPo Kitchen bought more mac and cheeses than I have ever tried before.  They prepared them according to the instructions but didn't spike them with Kerrygold creamery butter, my hidden ingredient.  In a blind tasting, a small panel savaged our Kraft kitchen collection.

According to the Washington Post, "Tasters said the cheese tastes like it was grown in a lab.  It had an 'unpleasant aftertaste,' and one taster described it as 'the chaotic neutral of mac and cheeses.'" This dismal result lumped our Kraft preference along with Trader Joe's Wisconsin Cheddar Macaroni and Cheese under the title "The Worst Boxed Mac and Cheeses".

When we return to the States for a visit, we plan to bring back the best boxed mac and cheeses. According to the rigorous WaPo taste test, here are the best:

The creaminess and nostalgia factor put Velveeta at the top, with the highest score in the entire competition, even beating the TJ’s frozen mac. It “has more of a cheese sauce texture” than others, which testers complained were too thin. The “extra cheesy, creamy” shells “provide a solid base for all the cheese,” and made one of our testers declare: “It’s like being a kid again!”

Though it “could benefit from some pepper,” and the sauce was a little loose, our tasters liked this cult-favorite mac and cheese, which was one of the few that didn’t have a nuclear orange hue. “The shells are adorable,” one taster said. “White is better than orange, but shells are better than macaroni: This is my theory of mac and cheese aesthetics,” said one taster (which, tbh, we could write a whole article on that, but we’ll spare you).

Testers praised its “good noodle texture” despite a “definite powdery cheese taste.” It “looks like a classic mac and cheese” — with its thin noodles and orange powder, but scored several ranks above the Kraft style it was so clearly trying to imitate.

I HAVE GIVEN MY Mac and Cheese addiction to my Irish-American offspring. Those two pre-teens like it more than pizza. Now I discover from Maura Judkis in the Washington Post [1] that our family macaroni and cheese of choice isn't haut cuisine.