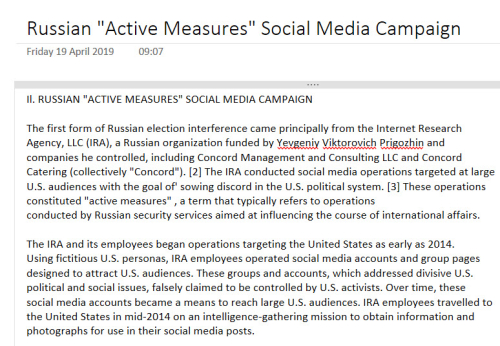 I'VE DISCOVERED fascinating cross-talk beyond the 448 page Mueller Report. Local radio host Fran Curry counted on me to digest the large document so I printed it for him and then went on air to localise its content for Tipperary listeners.

It will take several weeks to listen to the cross-talk from others who have also read special counsel Robert Mueller’s report. But I know that only a micro-segment of America truly cares about its contents. "No Collusion" and all that.

Nonetheless, there exists jaw-dropping details about the inner workings of the administration of President Donald Trump, meetings with foreign officials and plots to affect not only the Americas elections but other elections throughout Western Europe.

Trump has business dealings in Ireland and now I wonder if his commercial property evolved after working with relatively unknown developers like in his Moscow dealings. The type of development Trump wanted in Moscow needed Putin's approval. That would have been something Trump needed to keep from prying eyes.

Moscow for Trump would have been a mega deal. In fact, Cohen said the Trump Tower Moscow overall "was potentially a $1 billion deal.” Under the terms of the agreement, the Trump Organization would get an upfront fee, a share of sales and rental revenue, and an additional 20% of the operating profit. The deal offered by the well-known Agalarov developers, in contrast, would have brought in a flat 3.5%.

For Trump, this agreement promised to be the deal of a lifetime.

For a better analysis, I recommend you listen to ProPublica's "Harm to Ongoing Matter".

In the meantime, I'm continuing to parse the single section of the Mueller Report that explains how Russia weaponises social media. That's what is in the screen cap above and I will update this blog post with a link to the relevant OneNote content once I've reviewed my edits. I'm capturing the pages by using Microsoft Office Lens and OneNote 2016.

[Bernie Goldbach teaches creative media for business on the Clonmel Digital Campus of the Limerick Institute of Technology.]

Posted at 10:59 AM in Current Affairs | Permalink

I'VE DISCOVERED fascinating cross-talk beyond the 448 page Mueller Report. Local radio host Fran Curry counted on me to digest the large document so I printed it for him and then went on air to localise its content for Tipperary listeners.