Inside View: Meanwhile in Portland 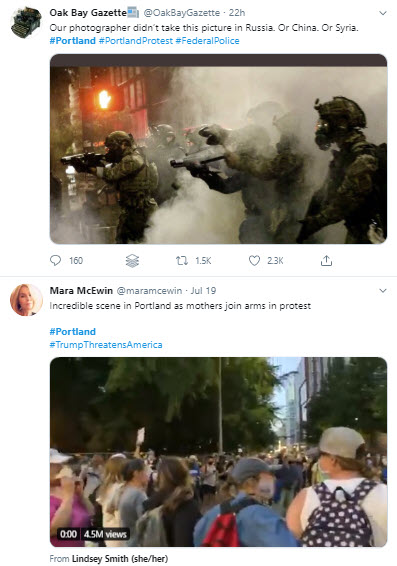 Misty reposted an eloquent update from a friend who is close to the protests in Portland, Oregon.

I live within walking distance from the district where the nightly protests happen and on most evenings protesters weave their way past my apartment building on their way to gather in solidarity. They do so peacefully, they usually grab a snack from a local open food stall. If I’m walking my dog and pass by a group, we give a cordial nod.

In the areas where the protests are occurring, there is graffiti. It’s artistic. At night I can hear the protesters being dispersed with military grade percussion weapons, I know it’s military because I’m more than 20+ blocks away and can still hear it and I’m a veteran so I recognize the sound. I will also say, as a veteran, the use of military grade stuff on civilians makes me jittery. I’m not okay with it on many levels, morally but also, for veterans who have had any live fire experience, this is not the sound of happy memories.

Even though I’m close to the protests and am on a route the some protesters take to and from the protests, I’ve never felt unsafe walking my dog for his evening walk or going about my own business in my neighborhood. This is because there aren’t any riots or looting going on. We have chosen, as neighborhoods and as a city, citizen to citizen, to be safe with one another. We are not cowering in fear to live our lives. We put on our masks (because science and there’s a pandemic) and put a bird on it, then go outside and do our shit.

But now, I don’t feel safe any more, because we have unwanted, illegal, undeclared feds in our midst brought in to harass and harm Americans as a political stunt. It’s not okay that you can be pulled off the street in your neighborhood for no other reason than you’re a Portlander walking home. Will they start following the routes the protesters travel? Will they come into my neighborhood? It’s so close, who knows?

One night, earlier in the protests, I pulled a group of younger protesters into the vestibule of my building while the helicopters were circling overhead, they were maybe late teens, early twenties. Exhausted and scared, they wanted to go home but it was hard getting past the police who were herding them from one location to another, forcing them to run where they didn’t want to go. They waited it out until the helicopter moved on then called a ride who was able to come and get them.

Way back, when we still had sport and Kaepernick was a QB, when he knelt, I was 100% for it, as a veteran, I served for his right to protest in exactly that way and his protests was righteous on top of it. If someone would have asked me who was the most American, American back then I’d have pointed at that man kneeling on a field—think enough about it and you’ll realize that to explain Kaepernick in that moment, you have to explain everything that is America, the original sins of slavery and genocide but also American justice and equality and our struggle to find it, and American idealism, and the idea of the More Perfect America. Kaepernick knelt and told us we had stopped trying to reach our ideal, that we had left injustice unchecked, that we had forgotten to still strive for a More Perfect Nation. American excellence knelt on that field, a great American.

Years later, waiting with those kids, I thought about Kaepernick kneeling and the country I had served and what it had done to George Floyd and Breonna Taylor and the protests that have happened in the wake of their murders and the BLM movement and felt like we were in a surge toward maybe More Perfect. These protests...I served for them.

Then a few days later the President cleared Lafayette Square. And now some weeks later, this. Unmarked vans and my fellow Portlanders being pulled off the streets by uninvited federal agencies.

Listen to "Whats Happening in Portland" on Spreaker.

[Bernie Goldbach teaches creative media for business on the Clonmel Digital Campus of the Limerick Institute of Technology. The image in this post is from Twitter. The text is from Facebook.]

Posted at 07:12 AM in Current Affairs | Permalink