« Audiomo Live Session | Main | Told to Get a COVID Test » 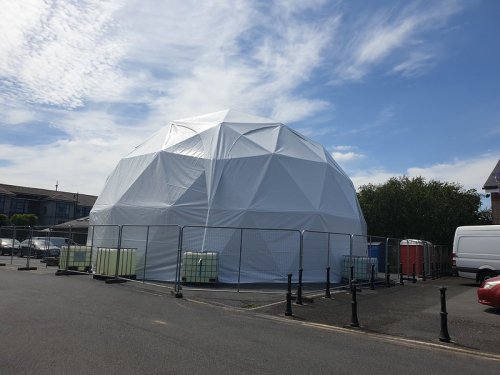 I'm working with conversational glue at the end of June 2021. I made an audio clip while reflecting on things I've done that are going to stay with me long after the annual audiomo challenge passes into the next year.

Listen to "I Enjoyed The Conversational Glue #audiomo E568" on Spreaker.

The most import thing I learned in this 11th year of audiomo is that there are dimensions of communications that are more constructive when they have a community building dynamic. In this case, the self-organising community of audiomo binds together by a conversational glue.

I've completed audiomo before in different locations. This year, because of the pandemic, I orbited the same space and recorded audio within five kilometers of my home in County Tipperary, Ireland. In the past, I did the audiomo challenge while in other countries. It was expensive during several years before because I had to pay international data charges. This year, I've been fortunate enough to listen to people on my own Wi Fi connectivity. And as an added bonus, I've been able to download many of the episodes offline to listen while digging dirt for a garden that were renovating. 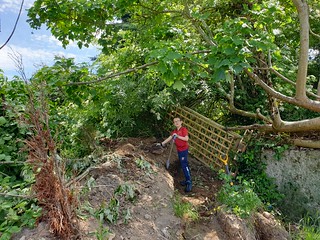 I followed audiomo easiest through audio feeds that many of the creators used with their content. I listened more often while using the Pocketcasts app. It was faster than opening Twitter and tapping on links on the public timeline.

So what piqued my interest with audiomo? What kept me listening every day? The short stories of life and voices that share interesting pieces of life. I had help from the series organiser @ernmander. Ernie Hartley would listen to audiomo and then retweet links to the clips. Paul O'Mahony and Roger Overall summarised many of the clips so they acted as my personal curators. All their curation moved the conversations close to the top of my stack while I used the search term #audiomo. 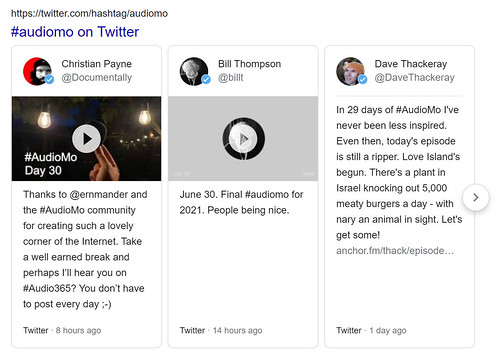 I enjoyed some familiar voices.

I appreciated Christian Payne, who I've been reading on his Substack. You can go straight to Documentally.net and find a premium space, a place where you can read dispatches Christian writes. They're not easy to write. Once a week I get what is more than 1000 words from Christian. They're brilliant synopses of thoughts, things he's tried, places he's been, wishes that he aspires to. And then there are reflective comments strings on the back of these dispatches that are just really good.

Mark Cotton continued with his Bletchley Park insider tips as well as his ideas about lassoing podcasts and squelching American sound.

Thanks to Andrew Browne and his Tech Authority Podcasts, I'm doing some things conversationally now using Zoom.us and Rodecaster pro. Our conversations will be recorded for review by groups of my Creative Media students. The technical tips in the joint podcasts will help students manage their Creative Media challenges.

As a result of audiomo, I'm collaborating with Josh O'Farrell Hurley, @OFarrellAudio. We're jointly using the Spreaker CDN. I'm hoping Josh can beam into Creative Media classrooms, into studio settings he once owned while he completed an Honours Degree in Creative Media.

So, thanks to all the people who created the conversational glue that I've enjoyed during the month of June 2021.

In August, if you're interested in exploring some of these high points of conversation that that I've heard, you could ask Spotify for the term "Snippets of Audiomo", and you'll hear several hundred episodes of people who've given me permission to rebroadcast their streams, into platforms like Spotify and into smart speakers. I want to enjoy rewinding the evergreen content that several people shared. Like Roger Overall's take on wine. Kate Sparkle's riffs on moving and her insights into the creative industry. Slandi's journeys into his man cave. Ray Garraud sharing his running. Bill Thompson offering a slice of broadcasting life.

So thanks to sharing during audiomo 2021!

I wish there were more women's voices that in audiomo. Perhaps I can help solve that in the future. I want to bring new voices into the mix to be part of the conversational glue that I enjoyed in June 2021. These voices bind people together. I'm going to take some of these thoughts into my local town, inside a place called the Dome. You can listen to me make a Topgold Audio Clip there.

And you can find me on all good social networks as @topgold.

[Bernie Goldbach teaches creative media for business on the Clonmel Digital Campus. There's a community dynamic of social audio that should feature in the Clonmel Junction Arts Festival and perhaps it will if co-host Dylan ramps up his audio conversations with Clonmel natives during the next 10 months. Most of this blog post generated from a transcript prepared by Otter.ai of the original podcast that was recorded on my Samsung Note 9 using Spreaker Studio.]

I'm working with conversational glue at the end of June 2021. I made an audio clip while reflecting on things I've done that are going to stay with me long after the annual audiomo challenge passes into the next year.

Listen to "I Enjoyed The Conversational Glue #audiomo E568" on Spreaker.

The most import thing I learned in this 11th year of audiomo is that there are dimensions of communications that are more constructive when they have a community building dynamic. In this case, the self-organising community of audiomo binds together by a conversational glue.