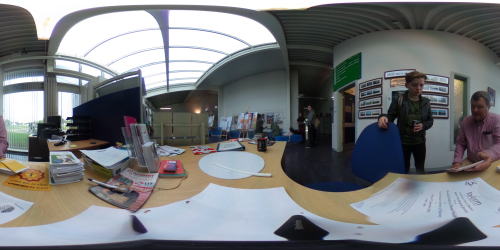 WE USE A Ricoh Theta S #ricoh360 camera in every academic course I teach on the Clonmel Digital Campus and I’m impressed at how its use improves the critical visual skills of students. There is so much more in an image when you can spin a photo up, down, and around.

I'M INTERESTED IN SEEING how the 1916 musical plays in the West End because I think it's American run could be successful.

MORE THAN ANY OTHER thing I've seen about the demise of the Celtic Tiger, the film 8.5 Hours exposes a series of probing thoughts about how excessive consumerism killed off the hard-working demeanour that I saw when I first walked among the information technology work force in Ireland. In late 1994, I watched people coding web pages in coffee shops and in self-service laundries with washing machines spinning in the background. Ten years later, it seemed that some of that code-loving drive had moved east and was replaced with a fun-loving energy focused on loving life. All my impressions are my own, formed by places where I associated in the centre of Dublin or out at Citywest Business Campus. In both of those locations, I passed by people who wore the same kinds of clothing as the actors in the film 8.5 Hours and I listened to the same snippets of conversation in the film. Times have changed since those heady days. The Celtic Tiger was stabbed by the sword of consumerism and fatally slashed by easy credit that boosted people into unsustainable lifestyles.