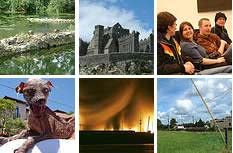 FLICKR SAYS today records the visit of the 50,000th person to my main Flickr photostream. I've just over 2000 images online as Irish Typepad and several thousand more in my two other Flickr accounts. I've learned some things about social networking from the images I've upstreamed to Flickr. It's been a fun experience.

The first images I put up on Flickr were shots from Kells, County Kilkenny, Ireland. It was the start of a wonderful experience that has affected dozens of students along the way.

Within days of me uploading images from Kilkenny, people were sending me private messages about the place. That confirmed how Flickr was a social network. My most popular image comes from County Tipperary, Ireland. It's my "most favorited" and is the Rock of Cashel, which I know has been appropriated and reused by others. But that's the way it should be since my most popular image is released under the Creative Commons.

With eight comments, the top-right image of four people seated in a row is my most commented image. That's nothing in the way of comments because it's easy to find mountains of comments on Flickr images. Most of my deep comments (more than two at a time) occur because of one degree of separation. Normally, I get two or three comments on a well-composed image, often months after uploading it.

The bottom-left image is Sam, the world's ugliest dog. Sam died but his story attracts more people to the long tail of my weblog than any other image from Flickr.

The bottom-centre image was taken by a press photographer of an oil refinery burning after Hurricane Katrina. I grabbed it fro Yahoo! It has been viewed 11,867 times since I put it up on my Flickr photostream.

The bottom-right image is one shot with a Nokia 9500 cameraphone. It has issues but it's popular with the cameraphone crowd, making it the sixth most popular image I have taken. It has attracted a lot of interest from other Flickr groups, but no comments and no "favs".

Although 50,000 visitors is a nice notch for the belt of blogging, I'm under no illusions. I know that many of the visitors use Flickr as an alternative to Stockbyte. Designers, web developers and students click and nick thousands of images every day--many without attributing their source. I know that attracting visitors in a steady stream means uploading images several different times a day. That's been made easier through my Nokia N70. I can snap and send with two clicks on the phone through a tasty Zonetag application. With a little more social connectivity I'll scroll up to 100,000 visitors faster than I got to the first 50,000. I should pose more snaps with a Moleskine notebook in the frame because only nudes attract more people than the Moleskinerie crowd. I should spend more time organising my Flickr images, commenting on others that are already there and visiting Flickr groups. Getting attention on a social network means using the network socially. I'll have some time to do that during the summer months ahead.

You can follow my fav photos by adding topgold to your del.icio.us network. For the record, my main blog (IrishEyes) has 3190 posts, 2222 comments, 1.28 million visitors, and 809 blocked commenters.

Posted at 12:38 PM in Irishblogs | Permalink

FLICKR SAYS today records the visit of the 50,000th person to my main Flickr photostream. I've just over 2000 images online as Irish Typepad and several thousand more in my two other Flickr accounts. I've learned some things about social networking from the images I've upstreamed to Flickr. It's been a fun experience.