WHILE MOST of Ireland decamps for summer holidays, a small team of social media advocates has started planning details for the fall's first social media event: Podcamp Ireland on Saturday 29 September 2007 in the Kilkenny Ormonde Hotel. Details of the event have popped up in Google Alerts, on Technorati and among photostreams when searching for podcampireland07. If the initial search queries are any indication, more than 80 people will make the trek into Kilkenny for the day-long event. In fact, interest from Dublin PR firms in Neville Hobson's talk will probably mean people interested in PR 2.0 will come to watch early adopters demonstrate the tools they are using to connect to a vibrant stream of conversation concerning the best way to spread the word about company products and services.

ALTHOUGH IT SOUNDS like a podcasting event, Podcamp Ireland (29 Sep 07 in Kilkenny) is evolving into the autumn's social media event. That's because much of its planning continues percolating through social networks like Jaiku, a wiki, memes on blogs, shouts on Twitter and related activity on Facebook. As one of the planners, I have done little with email and most with several social media tools that I have learned to trust. Along the way, I have become a Jaiku Junkie and I have made the mobile version of Facebook a touchscreen jump button on my phone. I'm intrigued by the powerful reach of these tools. While competent business communicators have an assortment of polite ways to nudge people, these social media tools move the game of online collaboration to a higher level.

WHEN INTERNATIONAL reader Sean P. Barry returns from Japan, I expect he will pose the same question about the iPhone as some on SlashDot raise in the most literate thread of 2007. "What's keeping US phones in the Stone Age?" (A: Lack of competition.)  From the thread: "Looks aren't enough. Finally, the price is ridiculous. The device is an order of magnitude more expensive than my now year-old Keitai even with a two-year contract. After returning to the US from Japan, I've come to realize the horrible truth behind iPhone's buzz. Over the year I was gone, US phones haven't really done anything. Providers push a minuscule lineup of uninspiring designs and then charge unbelievable prices for even basic things like text messages. I was greeted at every kiosk by more tired clamshells built to last until obsolescence, and money can't buy a replacement for my W41CA." When I return to the States on my annual shopping expeditions, I walk among the mall rats and see how all the US providers are stuck with  yesteryear's designs, tied to extortionate multi-year contracts.  And I'm happy for the options availed in Ireland. I can get mobile phones to do as little as text and voice for less than $40 month. For those charges, I can download an unlimited amount of video that lines-out from my Nokia N95's 4GB removeable data card to my television. I'm just saying, not trying to articulate a feature set here.

A SIDE CONVERSATION a few days ago during Limerick OpenCoffee meandered around the wealth events logged by lucky Irish riding on the back of strong rises in property values and shares traded intelligently on large stock markets. If you left Ireland in the 80s or early 90s and returned today, you would probably notice that the net wealth of Irish people has topped the three quarters of a trillion mark for the first time in history. According to the Bank of Ireland's "Wealth of the Nation" survey, Irish household wealth rose by nearly 15 per cent in 2006. The truly wealthy have now entered a time when their transfer of wealth to the next generation will become a major issue. On top of that expected transfer will come pressures to the Irish Exchequer to fund some very generous pension arrangements for State employees. I intend to remain in Ireland as the wealth horizons reshape themselves, wondering if the country will reach a point where senior citizens draw down the prosperity enjoyed through property valuations instead of bequeathing it to the younger generation. Bulging pockets of money always seem to increase the potential for strife.

Richard Curran -- "Survey reveals net worth of Irish people up by EUR 100 billion" on the front page of the Sunday Business Post, 29 July 2007.

NEIGHBOURS WHO lamb are quick to point out the inherent value of their sheep. But there's more than good chops from those cuddly beasts. Sheep are renowned for their lawn care skills as documented by this infographic.

BECAUSE I BELIEVE technology should help people who face challenging hurdles in communications, I am planning to fund the purchase of an iPhone for a deaf student. The student needs to have web access without tying up a computer in school. I'm doing this because I have a known bias for Nokia and I have to work through that bias by feeling the pain associated with going across to the other side. The pain also comes attached with a large dose of personal reflection about the ingrained prejudice I have as a prosumer. I simply forget that most people do not use their phones for high-resolution photography, mail filtering, group text, podcast management and music playback. Because I like my Nokia and SonyEricsson phones to do these things with dedicated buttons or icons, I forget that I am not writing for the mass market because most people simply don't care about all that functionality on their phones. People want to carry sweet things. They want their phones to do few things beautifully rather than many things that misfire when running together. They don't seem to mind when encountering memory errors, even though phone reviewers bang their fists on the table whenever those restrictions appear on screen. (Note the 8MB limit on the iPhone.) The young teens we train in social media pull out their phones when asked to shoot photos of bling. It's all in the form factor of their phone and the iPhone form factor wins the day. Add to that form factor the fun factor enjoyed when actually using the iPhone to do things.

Behind the iPhone's form factor is a telling statistic revealed by Google. When Robert Scoble talked to a Google executive, they shared inside information that showed how Google is seeing "far higher usage on the iPhone than any other device that Google’s apps and services are on". Scoble speculates this is happening because the iPhone's user interface offers a thrilling interaction when sliding around on electronic maps, web pages or nicely formatted web mail. Nokia knows this and has already shifted considerable energy behind developers who are going to unfurl some very potent software that makes Apple's "really really really lame software developer platform" (Scoble's words) look even more embarrassing.

BABY WATCH keeps me local but if I had wings, I'd be in Arlington National Cemetery for the passing of another classmate, Mike Butler. Everybody liked Mike, the humble guy who asked for nothing. He retired from the US Air Force in 2006 and took up a job as a private contractor with the Civilian Police Advisory Training Team, helping the Iraqi police force. This is the kind of security work typically performed by Irish Defence Forces on rotation to other hotspots around the world. Mike Butler was working near Tikrit, Iraq and was killed in a five-vehicle convoy when a rocket propelled grenade hit his vehicle. 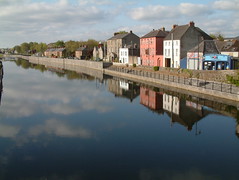 IF CONNECTED CONVERSATIONS interest you, the agenda for Podcamp Ireland should provide some compelling reasons to spend Saturday, 29 September 2007, in Kilkenny, Ireland. If you listen to business podcasts, you already know that Neville Hobson will attend Podcamp Ireland. A small team has started organising the day-long event, offering basic and advanced coverage of promotion, production, publishing and hosting social media online. We have chosen Kilkenny for several reasons, not the least of which is its reputation for the greatest density of social opportunities per square metre when compared to any other city in Ireland. You can spot one of those social venues in the photo snapped on John's Bridge shown at left.

Using N95 to Write About iPhone

NOKIA GRACIOUSLY loaned me its EUR 750 Irish-approved N95 today and after a few hours of use, I can see and feel business telephony features that anyone depending upon a mobile phone to reduce their daily workload should consider seriously. I used it in one use-case scenario: to interact over WiFi with Jaiku, a free group texting service. I updated items on Jaiku's Podcamp channel during the course of a phone conversation with three other planners. My updates complement a set of meeting minutes prepared during this conference call. I was able to text with one hand with the N95 while talking on another phone. I kept texting until the free WiFi node went down in the Guinness Lounge, a nomadic meeting point and watering hole near Heuston Station, Dublin. I know this isn't a typical scenario in a meeting--unless you're the dedicated scribe and expected to contribute while writing summaries during conversations. The N95 let me do that task. I don't think the iPhone will be able to operate effectively in this kind of setting. But maybe it's an apples and oranges scenario and those buying iPhones will perch them on meeting tables in front of their note paper and contribute to the conversation that way.

NO MATTER HOW you plan the trips, heading from the regions in Ireland to spend a work day in Dublin is a tough slog. I spent a year driving 82 miles one way from Kilkenny to the Dublin Airport and did not have the energy to recycle day-to-day. Thousands of Irish commuters endure more than 120 minutes of daily commuting. There is no way they can be invigorated on a Friday. I am halfway to Dublin from Tipperary (on Aircoach at left) and realise why many athletic teams spend the night before championship fixtures within 10 miles of the fixture. It is hard to score when you are wrecked.