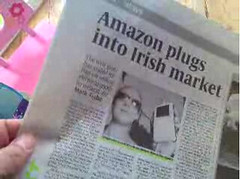 SINCE I HAVEN'T culled files from the main memory of my Nokia E90, I'm limited to a three-minute Qik video clip before the phone balks. So this week, I'm just going for a few words. Those words would be netbooks (but not the way a lot of readers would think), Boingo, wishlist, hustings, parallel, hypermiling, and Audible.

Netbooks. Some second-level teachers will have to teach students without any books from September, so says the Teachers' Union of Ireland. [1] I recommend parents park their kids' mobile phones in a kitchen drawer and bank the money normally used to top up phone credit. Within a few months, the kids could get netbooks with the savings. There are several places where whole books have been scanned and shared. If several vocal parent groups set forth a public movement to upload costly textbooks onto netbooks, all sorts of outcry would ensue. There are copyright issues and teaching practises that would be upset by this activism. I'm planning to equip my youngest with a netbook and to limit the number of textbooks she has to carry to and from school. I'm sure to encounter issues with the teaching staff when I do this but it's worth the firefight.

Boingo.  Wifi usage is up all across Ireland as you would expect with a popular wifi phone flying off the shelves. British Telecom says usage of its hotspots hs doubled year-on-year. [2] It's relatively easy to find free and open wifi in Dublin (see some of my screenshots that show the range of options). It's also super-convenient for me to be able to use Boingo on my Nokia E90 and to slot that phone into my laptop as a wifi or 3G signal provider.

Wishlist. I have a lot more to inject onto my Amazon Wishlist now that Amazon.co.uk will ship electronic goods into Ireland. [3] Gadgets like iPods will be around 15% less expensive through the online retailer than they are in a High Street shop in Ireland.

Hustings. Things are getting boisterous on the pavements around Ireland as the Irish budget bites into the common man. [4] "You'll see a return to gender wage inequality. We are taxing the economy into the past," says the Sunday Times.

Parallel. People are making a few bob with iPhone Apps. [5] Too bad the cute little phone won't run more than one at a time.

Hypermiling. I spotted hypermiling in an audio piece at Tom Raftery's web site and today it appeared in an eco article, Hypermiling is wrining the greatest possible mileage out of a given amount of fuel. [6] It's a fun practise that is fueled by the Eco Assist feature in the Honda Insight. An electronic display at the centre of the instrument panel has a horizontal bar graph depicting fuel consumption, where optimum economy is achieved by keeping the bar at the centre line. Above it are electronic representations of green shoots--the more showing, the more frugal the driver. Outstanding results lead to a plant blooming.

Audible. Many believe banking will become just like a utility: heavily regulated, low-profit, and oriented by law to achieve a social aim rather than a financial one. [7] Those thoughts form a major premise of Paul Mason's book called Meltdown: The End of the Age of Greed. I'm trying to get the book as an offering from Audible.com but that might mean waiting until Christmas 2009.

Posted at 09:12 AM in Current Affairs | Permalink

SINCE I HAVEN'T culled files from the main memory of my Nokia E90, I'm limited to a three-minute Qik video clip before the phone balks. So this week, I'm just going for a few words. Those words would be netbooks (but not the way a lot of readers would think), Boingo, wishlist, hustings, parallel, hypermiling, and Audible.