LIT HAS CERTIFIED an intensive Web Promotion for Business course for ex-Dell employees under a programme facilitated by the European Globalisation Fund. We're just getting started. I've found it useful to record revision clips in my car via Audioboo before the classes start so we can develop a way of recording sign language that complements the highly relevant content. This is my first attempt at this process. With the help of talented fourth year Applied Communications students, we will tweak a proper production process.

GE11 from an American Point of View

Listen, watch on YouTube or play on your iPhone.

TWO LARGE POSTERS from the formerly dominant political party in Ireland hang on lamp posts within 40 yards of my home. That party has suffered its biggest defeat in Irish history. Two larger signs sit prominently along the national road leading to my home. They portray two Fine Gael politicians (but not the ones in the opening key frames of my video). One of them was elected with the support of prominent social media advertisements, leaving behind a question in my mind about the origin of the donations that Fine Gael commanded in this election. In past years, you could follow property developers and the horsey crowd into party tents where handshakes accompanied brown envelopes. Today, although many believe a new dawn has crested over Ireland, some very big questions loom over the incoming coalition government. Many of the questions arise from the back of the bank bailout that has saddled every working citizen of Ireland with nearly a half million euro of obligation. Other questions arise because both the defeated party and the victorious one are right-wing. As a casual observer of Irish politics, I cannot imagine how much will change. However, I can imagine some big shake-ups in the way the civil service does business.

#ge11 Irish News by an American

Continue reading "GE11 from an American Point of View" »

Listen or watch the Qik clip.

ONE OF THE MOST challenging tasks for me in the months ahead involves teaching a group of ex-Dell employees under the European Globalisation Fund. Theirs is a Web Promotion for Business programme in which they learn elements of writing for the web, traditional public relations, social media, web analytics and group project work. I'm trying to create revision clips that include sign language cues for one of the students. It's trial and error, with our first attempt finished using the SonyEricsson Xperia X8 mobile phone streaming to Qik.com. I think our process will improve as I bring several fourth year students from Tipperary Institute into the mix and leverage their post-production talents.

THE FIRST STEP we ask of new entrants to our Web Promotion for Business course is to set up a Google account on their laptops. We don't impose Gmail on anyone but we have discovered good value in having a Google acount (for things like the Android Market). And since we bundle a SonyEricsson Xperia X8 with the course, getting free stuff in the Market is a nice bonus. There are several other steps that we ask of new students and many of them tell us whether they're able to work around a variety of stumbling blocks as they configure their online presence.

Listen or try the iPhone version.

WHILE IN THE CANTEEN on our Clonmel campus, I listened to one student as he showed me how to spoof Facebook while another group talked about sharing access to Facebook with employers. If FIR producers agree, the Facebook comment will air on the last episode in February. I'm using this blog post to test whether my software can produce an audio file that an iPhone can hear. Most can play the clip below but I think those with iPhones need to click on one of the links above the image of our FIR contributors who were snapped by my 12Mp Nokia N8 and emailed to Flickr.

Listen to @markmedia mp3 or as M4A [23 minute audio clip] 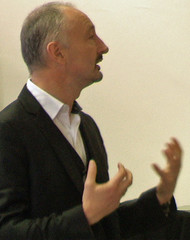 MARK COMERFORD VISITED the Clonmel campus of LIT today and delivered a guest lecture about #netshift. After his 110-minute talk, Susan Cloonan and Orla Amos corralled him in a quiet space to discuss some questions they had about today's changing online landscape. In a 23-minute interview, some of Mark's thoughts continue a line of discussion started in January 2011 by Helen Shaw when she lamented the state of finishing skills she has observed in several third level media graduates. On the surface, Mark would not agree with focusing third level skillsets on "red button" proficiencies. He explains why in the interview that accompanies this blog post. Orla and Susan asked for ideas about how to drill down through the noise inside active social networks. Mark talks knowingly about sentient networks that form part of our online existence. Some of Mark's ideas complement his lecture and may become segments in the TippFM College Lives series running on local radio. After members of the Applied Communications module try to salvage some of the lecture audio, a series of clips from Mark's Netshift lecture will appear on Inside View and also as revision clips in both the Social Media and Public Relations modules at Tipperary Institute.

Image snapped with shaky HD camera. Audio recorded with Sony ICD MX-20 by @queenofpots and @milolilo2 and by Mark on his iPad with region summaries.

THE IPAD TEACHES me how new computer users have totally revised the expectations information designers now have to embrace with digital natives. I have dozens of 30-second handheld video clips that show my three-year-old interacting with the Nokia N8, Xperia X8, iPod Touch and iPad. She has learned by watching the screen react to swipes and taps. She doesn't ask to see Barney on the laptop anymore.

Sunday News with an election outside

A STEADY INCREASE in support for Fine Gael continues to boost that Irish political party's opportunity to becoming a majority government next Friday. [1] [2] That theme runs across all the Sunday broadsheets, along with benefits for politicians. Specifically, the next leader of the Irish government is "due a lump sum of an estimated €100,000 when he turned 60 on April 24, and will also be entitled to an annual pension of in excess of €30,000 on top of his politician's salary." [3] Kenny's "entitlement" is part of an undercurrent in Ireland that could lead to a referendum on democracy. [4] [5] [6]

Continue reading "Sunday News with an election outside" »

WE BEGIN A 12-WEEK programme under the European Globalisation Fund next week. Part of the programme requires me to adjust my teaching style to fit the vocabulary of students from four different countries and the learning style of a deaf student. I'm staying lofi and trying to prepare a teaching routine that allows me to snap revision clips with the Nokia N8 ahead of time. If successful, I'll turn the phone onto student journals during the tutorial sessions and produce 10-minute summaries of every 120 minutes of contact time. I haven't done this before and I've no technology assistant. If I'm able to produce quality educational materials from inside the classroom, I will share them on iTunes U.

My Employer is Broke

MY EMPLOYER, THE IRISH EXCHEQUER, is broke. He needs to do what a common citizen would do--declare his status to his creditors, restructure his debts, and focus on keeping Ireland afloat.

More from The People's Economy.